Strengthening the judiciary and justice providers and promoting CEDAW-compliant legislation 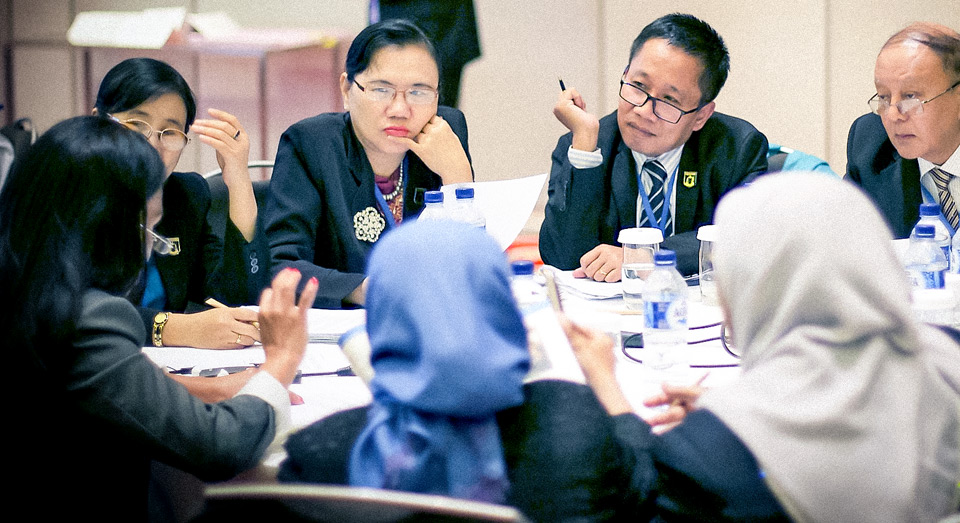 Discussion at the Regional Judicial Dialogue on Judging with a Gender Perspective in Jakarta in 2015. Photo credit: UN Women Indonesia

The outputs will aim to achieve the following: Elimination of gender-discriminatory attitudes and stereotyped behaviours towards women in the formal justice chain and in community-based mechanisms across the region. Promoting the adoption of domestic laws and court decisions that are consistent with international human rights law and standards, including CEDAW and the Bangkok General Guidance for Judges on Applying a Gender Perspective in Southeast Asia.

Programme initiatives across the region

Working closely with lawyers and law enforcement officers is key as they are the first point of contact with women, and can enable or hinder their real ability to access justice. Thus, through the partnership with the International Commission of Jurists (ICJ), a series of gender-responsive trainings was conducted for lawyers of the Integrated Bar of the Philippines (IBP) and National Police Commission (KOMPOLNAS) of Indonesia. Following the trajectory of capacity-building trainings for their lawyers, the IBP leadership established a Gender and Development Committee mandated to ensure the sustainability of gender-responsive institutional change beyond the programme’s duration.

The lack of awareness about CEDAW among judges in the region hinders Women’s Access to Justice. Judges, as the State’s main providers of justice, should be equipped with a sound knowledge of CEDAW and other human rights principles to be able to interpret and apply the provisions in implementing national laws. The ICJ, in collaboration with the Sri Lanka Judges' Institute (SLJI) and Nepal Judicial Academy (NJA), co-hosted the National Judicial Dialogue on the Elimination of Discrimination Against Women and Enhancing Women’s Access to Justice in the respective countries (August 2020, March 2021) The dialogues highlighted how women in Sri Lanka and Nepal continue to face a myriad of challenges when accessing justice, including legal, institutional and cultural barriers, which needs addressing by the judicial institutions in both countries.

Through the partnership with ICJ, and in collaboration with the Office of the United Nations High Commissioner for Human Rights (OHCHR) and the Federal Court of Malaysia, the 2019 Southeast Asia Regional Judicial Dialogue was hosted in Kuala Lumpur. The event brought together formal and informal justice actors to promote the use and application of the Bangkok General Guidance for Judges in Applying a Gender Perspective to enhance Women’s Access to Justice, and to raise awareness of their role in upholding international laws on women’s rights, including CEDAW. The judges from Indonesia, Malaysia, Philippines and Timor-Leste discussed how to apply CEDAW and other international legal instruments in their work at the domestic level to eliminate the negative impact of stereotyping and gender bias in the judiciary.