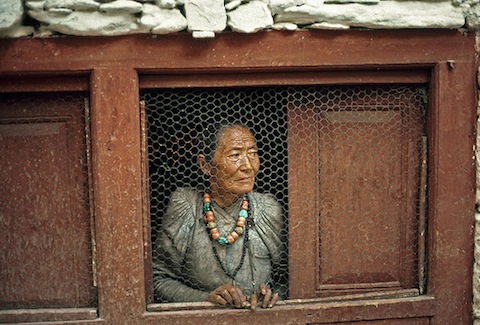 Kathmandu - It is hard to imagine that Baglung’s dynamic, confident and articulate, Sabitri Khadka once shied away from public forums, and people in general. Today’s inspiring Sabitri Khadka was once a regular 16-year old Nepalese girl who came home from school to a scene that would change her life. In 2002, Sabitri found her house surrounded by Maoist forces. It was torn down mercilessly and senselessly, and her father lay inside, brutally murdered.

Sabitri was aware of the compensation that the government provides to conflict victims under its Interim Relief Scheme and had applied to get compensation for her destroyed property. Like many others in her situation, however, she had no understanding of the process through which relief distribution was carried out.

As a victim of conflict, Sabitri asserts that it was finally a nine-day Training of Trainers (ToT) that made her confident in her rightful cause to fight for justice. Using the information provided to her in the training, Sabitri followed up on her relief application in Baglung. She learnt that her application, filed four years ago, had never been sent to Kathmandu from where the Ministry of Peace and Reconstruction authorizes compensation payments. But now, armed with proper information, she has ensured that her application is being processed without hindrances.

Sabitri’s training was conducted by the International Center for Transitional Justice (ICTJ) and supported by UN Women in Nepal. It is part of a larger programme to promote and strengthen women’s leadership. Since they suffer the most from violence in war and conflict situations, UN Women works with key government to ensure their equal rights in building nations.

This work is grounded in the commitment of  agencies, civil society, media and other stakeholders to implement the National Action Plan on the landmark UN Security Council Resolution 1325 on issues faced by women and girls during and after conflicts.

To the aid of others

After her training, Sabitri also came to the aid of others who had suffered like her. Using her new found knowledge, she assisted the families of missing persons to understand the relief process and receive compensation.

The turning point for Sabitri came when she participated in a five-day training programme with victims in Gorkha as a trainer. She explains that this helped her to discover her self-confidence and freely interact with victims, sharing knowledge about transitional justice in her new found role.

Soon after, Sabitri conducted her own training programme for survivors, representatives of local administration bodies, civil society and journalists.

When asked what about the training inspired her to come out of her shell, Sabitri said, “I learnt for the first time that there are mechanisms that center around victims and now with information on these processes I know what I should let other victims know.”