During her visit to Mali, Under-Secretary-General and Executive Director of UN Women Michelle Bachelet called for an end to the escalating violence and human rights violations in the Northern territories, including sexual violence against women, and for the unrestricted delivery of humanitarian assistance. Recalling Security Council resolution 1325, she strongly urged senior leaders and all parties to fully engage women in all processes set up to address the crisis and fully restore the constitutional order and territorial integrity of Mali. 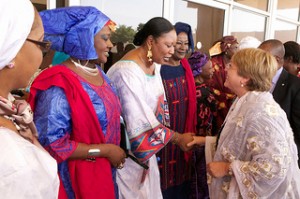 On 9 January 2013, UN Women Executive Director Michelle Bachelet meets with women who have been displaced by the conflict in the North of Mali. Photo Credit: UN Women/DFA Com

The United Nations is supporting efforts for peace and security in the Sahel region, which is experiencing complex security, political and humanitarian challenges, which are further complicated by the presence of armed groups and devastating human rights violations.

Mali is experiencing a political, security, and food crisis, the worst in its history. Since the military coup in March 2012, the occupation of the Northern regions has accelerated causing the displacement of more than 400,000 people. Sexual violence is being used to spread fear among the population, and women and girls are being targeted for disobeying rules imposed by rebels who are instituting a harsh version of sharia law.

Examples of these violations arose in discussions with internally displaced women and civil society activists, which were at the centre of Ms. Bachelet’s daylong trip to Mali on 9 January.

In her meetings with senior government and civil society leaders, Ms. Bachelet underlined that Malian women must be at the centre of all efforts to restore democracy, design and carry out a political process and prepare for elections. She stressed that lasting peace, democracy and sustainable development require an inclusive national dialogue. She called for justice for those who have suffered from violence.

“Women are suffering on a daily basis as they are subjected to gender-based violence and abuses in all the occupied regions. Lasting peace that extends beyond the simple act of signing a peace agreement is unsustainable if it is not rooted in justice. When violations of human rights are not investigated, when victims’ calls for justice are not heard, the risks for renewed violence remain high,” said Ms. Bachelet. “There is a Bambara saying ‘Bolondio kelen te se ka foi taa‘, meaning when people work together more things get accomplished. So is the case for peacebuilding. Peace mediations, peace agreements, peacebuilding need women’s full participation,” she added.

UN Women Executive Director reaffirmed her message, delivered to the UN Security Council in November, that there is an urgent need to adopt specific measures to protect women’s rights and prevent and stop violence against women and children, and that funding must be dedicated to reparations, care and the empowerment of survivors.

In Mali, UN Women is supporting the deployment of units to treat gender-based violence and the establishment of a national pool of psychologists to support women in both occupied and non-occupied areas. UN Women will also continue to support a broad-based and inclusive political dialogue and advocate for women’s participation to be an integral part of the transition. To advance this agenda, Ms. Bachelet launched a training programme for women on mediation and conflict management, attended by parliamentarians and women leaders. UN Women is committed to making sure that the voices of women in Mali are heard and acted upon.

Today, in Nigeria, on the last leg of her West Africa trip, Ms. Bachelet met with commissioners of the Economic Community of West African States (ECOWAS) to deliver the message of Malian women. She stressed that justice and the participation of the Malian people in mediation and the transition, including women’s leadership and full participation, are fundamental to building a sustainable future in Mali.

Related News
07/05/2022
STATEMENT ON THE HIJAB ANNOUNCEMENT
06/05/2022
Serving women and children gives me hope for the future
08/04/2022
Women groups relieve conflicts in fragile communities in the Philippines
05/04/2022
New report: To combat violent extremism in South-East Asia, the study calls to step up regional efforts to implement gender-responsive strategies
22/12/2021
In the words of Nurrunihar Mohammad: "Women's leadership … is beginning to be recognized"
END_OF_DOCUMENT_TOKEN_TO_BE_REPLACED