Law for women’s protection passes with unanimous support in Tonga

A new Family Protection Bill for the Pacific island becomes reality through critical lobbying and advocacy by a UNTF grantee and partners.

Nuku’alofa, Tonga – As many as three in four women have experienced physical or sexual violence in the Pacific Island nation of Tonga, according to a National Study on Domestic Violence against Women in Tonga released in 2012. Yet until now, there was no law to criminalize domestic violence or establish prompt police safety and protection orders or prevention measures. 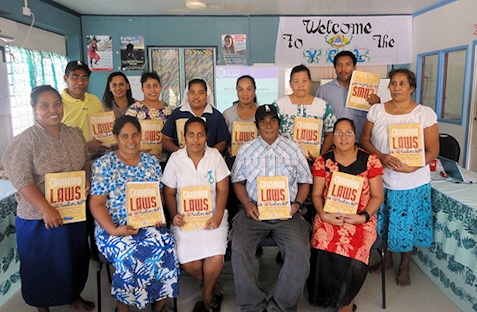 Participants of a Legislative Lobbying Training in Kiribati organized by the Regional Rights Resource Team (RRRT) through their “Changing Laws, Protecting Women” project, December 2011. Photo courtesy of the RRRT.

But that is about to change after a historic and symbolic vote on 4 September, when all 17 Members of Tonga’s Parliament who attended the third reading of a Family Protection Bill, voted in its favour.

“This is an historical moment in Tonga’s parliamentary history,” said Tonga’s Minister of Internal Affairs, Hon. Lord Vaea. “The core areas of the Bill have remained intact despite some very heavy debating and at times opposition from members of the House. For example, the protection order that increases the powers of police to issue orders on the spot, while strongly opposed by some members, has remained in the Bill.”

The development of the Bill was an initiative of the Government of Tonga through the Ministry of Education, Women’s Affairs and Culture Women’s Affairs Division, and the Secretariat of the Pacific Community Regional Rights Resource Team (RRRT) – a grantee of the UN Trust Fund to End Violence against Women, managed by UN Women.

The UNTF-funded programme “Changing Laws, Protecting Women” implemented by the team from 2009-2012 sought to improve legislation to protect women and children through lobbying campaigns on Violence Against Women and Family Law, in six Pacific Islands (Kiribati, Nauru, Samoa, Solomon Islands, Tonga and Tuvalu).

'Ilaisa Lepolo Taunisila, Tonga Country Focal Officer for the Secretariat of the Pacific Community RRRT, said that after so many years of lobbying, she is emotional like many others, when the bill was passed unanimously. “What a relief knowing that women and children who have long suffered in silence will now be better protected,” she said.

Taunisila worked with Tonga’s national-level task force on violence against women, which is made up of government partners, police, NGOs and other stakeholders. They provided inputs during the drafting of this ground-breaking legislation.

“While the bill's main objective is deterrence and acknowledgement that family violence – which was once a closed-door issue – is now everybody's issue, there is also a strong section on prevention and awareness which is quite unique and a first for the Pacific,” explained Ofa-Ki-Levuka Guttenbeil-Likiliki, a leading civil society advocate on ending violence against women in Tonga, who heads the Women and Children Crisis Centre, also a former grantee of the Pacific Fund managed by UN Women.

“The Police Safety Orders, which will undoubtedly require all police to undergo thorough training – if executed well – are a huge if not massive saving grace for women and children living in violent homes.”

During the final three-week long debate of the bill in August and September 2013, Guttenbeil-Likiliki’s and Taunisila’s intense lobbying efforts continued and included speaking on local radio talk shows to debunk misunderstandings and some of the opposition during the bill’s three-week debate. They also regularly briefed the Minister of Internal Affairs and clarified various sections of the bill and lobbied with various MPs.

“It is amazing to see the change and the power of lobbying every day, using every possible means and time,” says Taunisila.

Related News
04/02/2021
Fiji starts national consultations on action plan to prevent Violence Against Women and Girls
11/06/2020
Across the Pacific, crisis centres respond to COVID-19 amid natural disasters
18/07/2019
REACHing out for rights and services
15/03/2019
#MyRedLine – A social movement cataloguing where Afghan’s stand on women’s rights and peace
23/10/2016
UN Women to launch women, peace and security publications
END_OF_DOCUMENT_TOKEN_TO_BE_REPLACED