Because the risk of violence against women and girls increases in the aftermath of a disaster, UN Women is supporting training for first responders and disaster-risk-reduction planners in Fiji to prevent, recognize and address violence in emergencies across the Pacific.

In March 2012, flooding caused by torrential rain devastated the western and northern parts of Fiji’s main island, Viti Levu, leaving more than 8,000 people sheltered in 91 evacuation centres. It came hard on the heels of similar flooding less than three months earlier. Together, the disasters affected more than 350,000 people and cost the country more than USD 65 million.

In one of these evacuation centres, three girls were raped in one night.

“We have a humanitarian mandate to prevent harm and suffering without discrimination — gender and gender-based violence fall under that,” says Fiji Red Cross Society’s Health and Care Coordinator Marica Kepa. 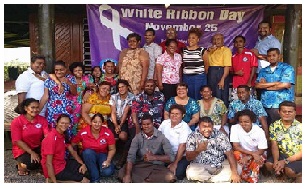 As a result, the Fiji Red Cross Society created a programme to specifically address the needs of women and girls in the aftermath of disasters, especially to prevent and respond to gender-based violence. It works with Red Cross staff who are usually the first responders at evacuation centres in an emergency. They provide “dignity kits” with specific items for women and young girls and hygiene kits for families, as well as psychosocial support and referrals to relevant authorities.

The programme seeks to help first responders better recognize and address gender-based violence and ensure that safety concerns for women are incorporated into disaster-risk-reduction planning and needs assessments.

“I never got to see the gender component of our work as vital within the Vulnerable Capacity Assessment procedures of the work that I am involved in,” explains Emosi Sakaturu, a Disaster Project Officer with the Fiji Red Cross who took part in the training in 2013. “After the training, I realize the urgency of including women and girls in all aspects of assessments and planning and I also see the importance of being sensitized in the area.” 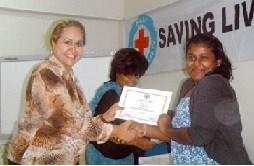 At a Fiji Red Cross training session. Photo credit: Fiji Red Cross Society
The initiative is supported by UN Women and complemented by a wider community programme aimed at raising awareness, increasing knowledge of violence and its impacts, and giving women a voice.

According to the Fiji Women’s Crisis Centre, approximately 66 per cent of Fijian women can expect to experience physical and/or sexual violence from an intimate partner in their lifetime, on a par with many other Pacific countries and twice the global average.One of the impacts of climate change is an increase in the intensity and frequency of extreme weather events, and it is in the aftermath of disasters like the flooding in Fiji that women and girls face a higher risk of violence and attack. The displacement, stress and trauma experienced by survivors intensify existing risk factors.

Moreover, placing women and children alongside extended family in evacuation centres can increase their exposure to violence and abuse. For example, according to an OHCHR report, after two tropical cyclones hit Tafe Province in Vanuatu in 2011, the Tanna Women’s Counselling Centre reported a 300 per cent increase in new domestic violence cases.

The nature of humanitarian assistance and the way emergency relief activities are delivered can exacerbate or even create risks for women and children. For example, not providing gender-separated, lockable and well-lit toilet facilities at evacuation centres can put women at risk of sexual and physical violence.

It is for this reason that the Fiji Red Cross Society has prioritized training first responders and its own staff in gender and violence against women.

The organization’s gender programme has so far trained almost 60 national office staff and branch volunteers, almost half of whom have been tasked with training others, and more than 200 branch volunteers have been sensitized on gender, gender-based violence and child protection. Almost 50 per cent of those trained have been men.

The Fiji Red Cross is also creating a suite of educational materials around gender and gender-based violence for first responders that will be available next year and could then be used across the Pacific.

This project is implemented by the Fiji Red Cross Society with a USD 100,000 grant as well as technical support and capacity-building from UN Women as part of its Pacific Regional Ending Violence against Women Facility Fund.

Related News
08/03/2022
UN Women Fiji MCO and Oceania Football Confederation ‘kick-off’ new partnership to progress gender equality and address violence against women and girls.
22/12/2021
Press Release: Ministry Welcomes ICT Boost to Progress Gender Equality in Fiji
01/12/2021
Launch: Gender-Based Violence Counsellor Training Package for the Pacific
30/11/2021
In the words of a survivor who now helps other survivors: “After 19 years, I woke up. I stood on my own feet.”
30/11/2021
In the words of Reverend Jone Tuiwaiwai: “There are things that God gave us that we cannot change, but our social roles is not one of them.”
END_OF_DOCUMENT_TOKEN_TO_BE_REPLACED