- “I want to write a blog to express my opinions about women´s situation in Cambodia and network with other people with similar ideas”, says Dany Sum, a 22-year-old member of a Cambodian women´s network and a participant in an Information and Communication Technology (ICT) workshop on blogging organized by UN Women. “Blogging allows us to exercise our freedom of speech.”, reflects Dany Sum on her experience.

Young Cambodians learn how to use Wordpress during an ICT workshop in Phnom Penh in July 2014. Photo: UN Women/Veronika Stepkova

Recognizing the potential of a virtual space for women’s engagement in public affairs, UN Women partnered with the Voice of Democracy – the first independent online TV channel in Cambodia, and known for its work with citizen journalists – to conduct a half-day workshop on political blogging. A group of young civil society activists, NGO workers and students learned how to use blogging as a means of voicing their opinions on gender equality, under the guidance of experienced Cambodian journalists, known for their innovative engagement with the public. The workshop took place in the Sithi Hub, a meeting place of IT enthusiasts in Phnom Penh.

The workshop was a part of a larger UN Women initiative on promoting young women’s leadership in the public and private spheres, and also tied in with the 20th anniversary of the Beijing Platform for Action (which outlines a visionary position on technologies as an enabling environment for women´s empowerment).

Mobilizing people with a similar perspective is key for social change. Kounila Keo, an influential Cambodian political blogger, provided key inspiration to the group, by sharing her experience of empowerment through blogging and journalism and involving the public in an online dialogue.

In Cambodia, ICT, used mainly by an increasingly politically active young population, is changing the landscape of public action and political engagement. This emerging trend was apparent during the 2013 elections which also saw a relatively large number of female voters. Blogging can play an important role as a platform for public discussion, empowering and motivating citizens to express their opinions and encouraging diverse viewpoints. 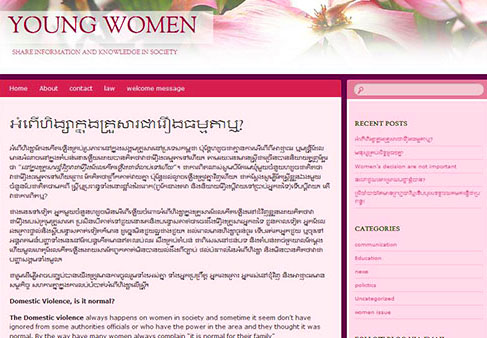 Dany Sum, who started blogging after linking with the group, is currently using her Wordpress page to reflect on women´s roles in education. Supported by her blogging community, Dany is not afraid to speak openly about discrimination and the importance of women´s equal role in a society.

With two out of every three people in Cambodia aged under 25 years and females comprising 51.4 percent of the total population, young women like Dany represent a dynamic and critically important social force. They have the potential to promote pluralism, democratic discussion and an environment where gender equality can be realised. “We should get together to build our capacities and self-confidence,” says Dany hoping that her blog will encourage empowerment of more young women.

Shared by
Veronika Stepkova, Communications Officer | UN Women Cambodia
Related News
08/10/2021
I am Generation Equality: Nidhi Mayurika, young innovator and space enthusiast
26/07/2021
I am Generation Equality: Nazia Zebin, Bangladeshi activist for rights of women and empowerment of youths
26/01/2015
No girl - no person - should ever have to pay with her life for her rights
11/12/2014
New blogging initiative amplifies women's voices on public affairs
25/11/2014
Cambodian schoolboy champions women's rights
END_OF_DOCUMENT_TOKEN_TO_BE_REPLACED