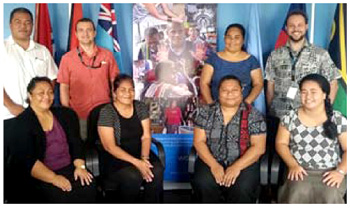 The delegation was headed by Puaita Etuati, Senior Assistant Secretary, Office of the Prime Minister of Tuvalu. Led by UN Women with support from the Secretariat of the Pacific Community (SPC) and the Regional Rights Resource Team (RRRT), day one focused on workshops and training on the international human rights legal framework and context, the CEDAW Committee process and the Convention’s 16 articles. This was followed by a full mock committee session and debrief on day two. “After the mock session, I have a real feeling of how it will be in Geneva,” Ms Etuiti said before departing. “It showed us we need to be really focused, and to really hit the question when we respond to the Committee. Without this session, I would not be as prepared.”

The dialogue took place on February 20 and the resulting report highlighted several areas for improvement, including: the impact of climate change on Tuvalu and in particular on women; participation of women in decision-making; economic empowerment of women; a large number of discriminatory provisions in laws and long delay in revision of national legislation; elimination of all forms of violence against women.

Related News
17/08/2020
Gap analysis report launched to identify and fix legislative gaps to end violence against women in KP
21/05/2015
Access to Justice for Muslim Women in the Southernmost Provinces of Thailand
05/12/2014
Indigenous women leaders in Southeast Asia unite against development-based violence
25/11/2014
Be a Champion: Prevent Violence and Discrimination against Women and Girls in Afghanistan
25/11/2014
Opening Remarks by Roberta Clarke at the Regional Consultation on the Role of Key Stakeholders in Ending Impunity for Violence Against Women and Girls in Asia
END_OF_DOCUMENT_TOKEN_TO_BE_REPLACED