“Information and communication technologies (ICTs) play an important role in empowering women, especially when it comes to their political and social rights,” said Anupama Suresh. She then proceeded to recount a concrete example of how simply providing women farmers access to a computer with an internet connection, or a mobile phone to share as a group, transformed their lives for the better. 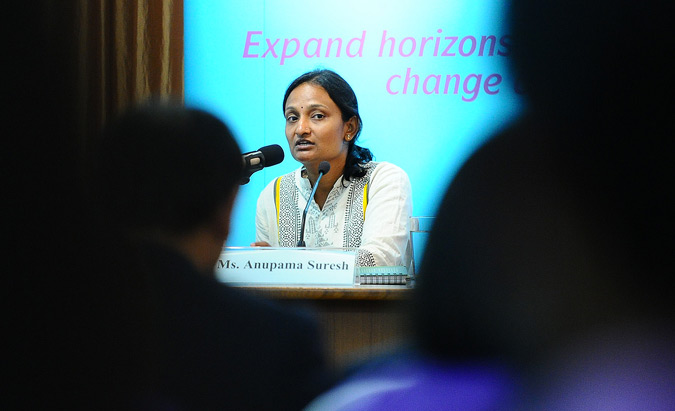 Anupama works at IT for Change an Indian NGO using Information Technology to promote socio-economic change from an equity, social justice and gender equality point of view. She was speaking to a room full of young students, in Bangkok at the event “Girls in ICT ” on the 23 April International Day for Girls in ICT, who listened intently when she explained how setting up a few dozen information centres in rural villages has had a positive impact on more than 100 villages in India.

For example, in the village of Kattemalavadi, in Karnataka State, a group of women who visited the newly established information centre learned the details of how much rice “below poverty line” households were entitled too and for what price under the government run Public Distribution System. Thus realizing that the local Fair Price shop owner had been inflating prices, they were able to come to him with these facts and he in turn had no choice but to start selling rice quotas at their lawful prices. All households in the village are thus reaping the benefits of cheaper grains, to which they are legally entitled. In another case, a group of women who had lost their spouses found out that they were entitled to certain benefits under the government’s Scheme for Widow Pensions, and were helped to submit a claim to receive the needed support. In yet another, Sundaramma, a local banana farmer, was able to obtain a subsidy to support her economic livelihood.

Anupama also recounted how elected women leaders were using the information centres and the IT tools made available to them such as digital voice recorders, cameras, and servers to strengthen their leadership. In India, although there have been significant advances in getting over two million rural women elected to office at local government level, these women representatives do not always have access to resources that would equip them to be effective in their public capacity.

They also often lack the basic resources to be connected to their constituents. Through the two and half year programme, “Making Women’s Voices and Votes Count”, IT for Change and their partner NGOs Kutch Mahila Vikas Sangathan (KMVS) and ANANDI have been increasing information and communication capabilities of elected women representatives and women's collectives in three Districts of southern India. Funded by UN Women’s FGE, the programme has resulted in more than 7,000 entitlement claims being processed and over 100 local government resolutions being passed: covering issues such as enabling better access to health centers, schools, and water and sanitation facilities. 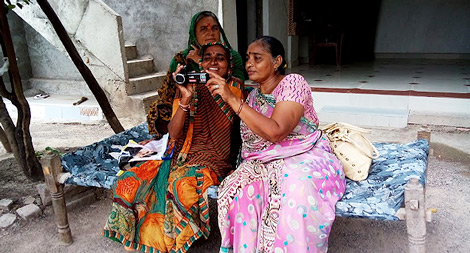 Local villager learning to use the Voice Recording System and a digital camera in newly set up information centers. Photo: UN Women/ANANDI

Anupama told the event participants how her IT savvy peers made sure that even the most marginalised women, including illiterate farmers working in the field, could benefit from the programme. Their weekly pre-recorded, informative messages are programmed to be sent free of charge to hundreds of mobile phones, at the same time, every Thursday. “The messages are recorded by the women, for the women,” she said.

Information in one such message resulted in hundreds of local women villagers showing up to a Local Government Assembly they had not been made aware of. In other cases, the location and details about local immunization campaigns for children are shared.

Through the programme, data is also collected and recorded to generate evidence based policy changes. Anupama provided the example of a user-friendly Geographic Information System handheld device that can be used for participatory mapping exercises, for example, to survey the availability of civic amenities at the local village level; she pointed to an easy to read image that mapped the basic infrastructure in the village, “you see, here below, the zone where it shows that there are almost no street lights to be found? That is the part of the village where the poorest and marginalized communities reside.”

“With this anyone can see that there is a crucial problem for which local policy makers need to find a solution,” Anupama said. The programme is therefore using different information sharing strategies to trigger discussions among local elected representatives to motivate them to take local level action to address key issues.

“Women who experience multiple and intersecting forms of discrimination need to first understand and claim their rights (...) Women’s collective action has also been crucial for ensuring the translation of legal rights into the effective delivery of services on the ground as well as demanding accountability and redress for major delivery failures.”

There are programmes like the one Anupama and her peers are implementing in India, that show us that using information technology can and should be used to facilitate collective action and instigate positive changes for women claim their basic rights.

About the International Girls in ICT

The “Girls in ICT” initiative at ITU is a global effort to raise awareness on empowering and encouraging girls and young women to consider studies and careers in ICTs. The International Girls in ICT Day, celebrated on the 4th Thursday of April each year.

Caroline Horekens is Regional Programme Specialist; who is based in Bangkok with UN Women FGE Asia Pacific Regional Office