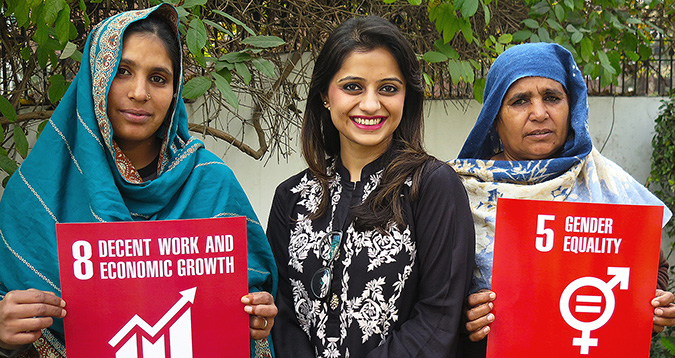 Following the UN Secretary-General Ban Ki-moon’s announcement on 21 January 2016 of the first-ever High-Level Panel on Women’s Economic Empowerment, the UN announces Ms. Fiza Farhan from Pakistan as a Member of this High-Level Panel.

As a Panelist, Ms. Fiza Farhan, Co-Founder and Chief Executive Officer of Buksh Foundation will provide recommendations for the implementation of the 2030 Agenda for Sustainable Development to improve economic outcomes for women and promote women’s leadership in driving economic growth.

As a Member to the first-ever High-Level Panel on Women’s Economic Empowerment, what would you say is the relationship between gender equality and economic growth?

To me gender equality and economic growth co-exist in a way that without one, the other will never be achieved, at least not in a sustainable future. With women representing half of the world’s population, their participation in the formal labor force remains significantly lower than men. Usually it is the women who bear the brunt of the informal economy, with minimum or no wages as compared to their male counterparts. My personal belief lies with the assurance that increased women participation in labor force as well as management positions, leads to enhanced productivity, creativity and profitability in the private sector.

What are we missing if we do not fully tap women as “economic contributors” in society?

Simply, we are missing half of the potential that this world is blessed with! With another perspective, without un-tapping the immense potential that resides within the women around us, we are depriving ourselves from half of the talent, skill set, potential and creativity that the universe has bestowed in humankind. Better economic opportunities for women not only benefit the women themselves, but they create added value for their families, communities, companies and entire economies of the nations.

What do you think are the main economic gender gaps that persist for the women of Pakistan?

As per the Global Gender Gap Report issued by the World Economic Forum, Pakistan ranks 141 in terms of economic participation and opportunity for women, 132 in terms of education attainment, 119 for health and survival and 85 for political empowerment. Such a state of affairs speaks for itself for the women of Pakistan and the various economic gender gaps that persist in the country. Active participation of women in the formal labor space, enrollment of women in senior level executive positions, involvement of women in decision making roles and in key leadership positions in male dominated sectors are some of the core economic gender gaps that I believe need immediate attention. However, economic gender gaps is not just a challenge for Pakistan but a global reality suffered by women across the globe in the developed and under-developed world alike.

How can Pakistan as a nation benefit from getting girls into school and women into jobs?

Pakistan’s educational system unfortunately experiences various challenges of discrimination; from the quality of education varying in public and private sector institutions, to regional disparity in quality of schools depending on the province, to the worst gender discrimination with a 10:4 ratio of boys versus girls that are enrolled in primary schooling. With the limited financial resources and budgets allocated to the education sector, it must be a priority to provide an equal opportunity to the youth of Pakistan to get quality education, irrespective of their gender, geographic location or societal status.

In addition to education being a basic human right, I personally believe that there is immense positive correlation between girls enrolment rate in schools and social outcomes such as reduction in fertility rate and the growing global population, increase in per capita income and the formal deployment of the individual skill set and talent to a professional job or business that will eventually contribute positively to the national economy.

Women’s economic empowerment has a multiplier effect that can boost whole societies and economies - how?

I am a strong believer and advocate of the “multiplier effect” of women economic empowerment that encompasses not just the women (which are half of the world’s population) but trickle down to her household, her children, her community, her neighborhood, and eventually the entire country as the cumulative impact adds up. Not only this, the impact of empowering a women economically, socially and politically springs benefits for the entire generations to come. There are multiple reasons and factual studies to support this statement; for example, investments in gender equality have the highest reaping rate of return’s that any other investment in the development sectors because women become the catalyst of change when empowered and further the cause formally and informally through their entire network of interactions.

In recent times, the corporate communities have also realized that increasing gender equality has resulted in increased creativity, customer retention, client relationships, community recognition, advanced innovations and hence profitability for their businesses. Furthermore, an educated woman will always prioritize the education of her children and of those she can influence, hence the future generations are taken care of when we invest in the life of a single woman.

It is said that women are the “invisible” workers, how does this invisibility constrain women’s rights and hinder their economic productivity.

There has always existed an invisibility, vulnerability, social exclusion and gender disparity for the home-based women workers continuously embedding them in a viscous circle of economic injustice and poverty. There are lots of studies that indicate that home based women workers or housewives (homemakers in my definition) are the most unrecognizable and invisible labor force, which in fact is the backbone that brings stability in the lives of all the remaining individuals in the household. It becomes worse when these invisible home-bound workers are bound by socio-cultural barriers and lack awareness and access to social protection facilities. I strongly believe the State needs to intervene to bring justice to this large segment of “invisible” woman workers, providing them with the comfort of socio-economic rights, proper skill trainings and access to loans and credits for their financial security.

What has been your motivation to link gender and energy?

Initially the plan was to focus on “access to energy for all”, which we decided to do through a network of social energy entrepreneurs. Creating sustainable solutions for energy was the primary objective of the project “Lighting a Million Lives”, and that was only possible if we engaged the communities in a self-sustaining entrepreneurial model of renewable energy. When we deeply observed the socio-economic status of the women in these villages, we decided to embed another critical impact within our project and select and train only female entrepreneurs from the communities to monitor and manage the social enterprise of solar lanterns. This strategic decision not only resulted in immense women empowerment in the ground levels but also created a sense of economic justice and freedom of our women energy entrepreneurs, also known as “Roshnah Bibi’s”. Today 165 Roshnah Bibi’s around Pakistan are responsible for the provision of clean energy to their entire communities, while generating a sustainable income for themselves and serving as the “agent of change” for our communities.

What obstacles and challenges did you face if any? How did you overcome these?

There are always obstacles and challenges when you work with real people in real communities. One of the key challenges we faced was in empowering and training the women of the community alone, which posed a certain cultural threat to the men of the households. We had to then strategically imbed a strong supportive role of the male members of the community within the project framework.

What one message would you give to women and girls to address structural barriers that limit their economic activity, empowerment and growth?

My one message is for women and girls to “Believe in yourself! Being a woman is more of strength rather than a weakness, only if you believe in it and understand how to use it. There is no force than a woman determined to rise!”

Related News
23/06/2022
UN Women Pakistan and foodpanda Pakistan collaborate for the promotion of workplace safety
21/09/2021
UN Women puts spotlight on the role of CSR for Women’s Economic Empowerment in Pakistan
26/05/2021
From where I stand: “Many households are prospering because of our work.”
27/07/2020
UN Women, NCSW launch Young Women in Pakistan: Status Report 2020
24/06/2020
I am Generation Equality - Female leadership during COVID-19
END_OF_DOCUMENT_TOKEN_TO_BE_REPLACED