Suva, Fiji – “Some of them just wanted to talk and share what they went through. How they survived the night, the nightmares, being trapped under the roof … they were just happy we came to them.” 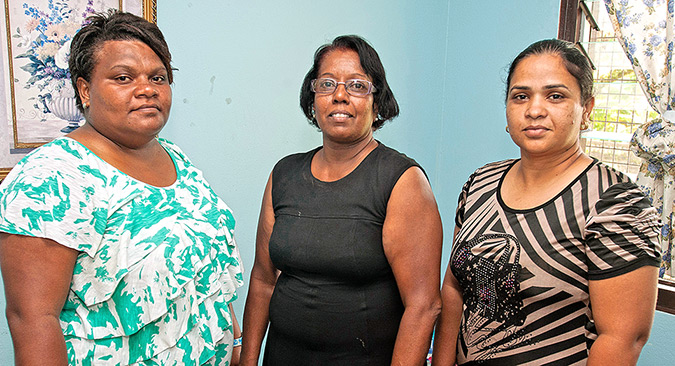 Empower Pacific counsellors Sisilia Siga, Bimla Madavan and Saral Chand were some of the first to reach some of the worst affected communities after Tropical Cyclone Winston. Photo: UN Women/Murray Lloyd

Saral Chand is one of Empower Pacific’s counsellors and was on the ground in Rakiraki and other affected communities in the Western Division within days of Tropical Cyclone Winston hitting Fiji. The organisation has more than 20 people out in the field and in many cases they were the first people to reach some of these communities and islands.

In normal times, Empower Pacific provide professional counselling and social work services through branches in Labasa, Suva, Nadi and Lautoka. It’s the second time they have deployed to deal with the aftermath of a cyclone, but Ms Chand says they have never seen anything like this before.

In the initial stages, Empower Pacific counsellors carry out psycho-social assessments in affected communities and evacuation sites gathering, information on the kind of services and support that is required. This includes identifying the risk factors associated with the physical environment, living situation, nutrition, mental health, and behaviours. These assessments feed into the official response efforts coordinated by Fiji’s Disaster Management Committee. They also provide immediate trauma counselling and group psycho-education sessions.

“I describe our role as we look, listen and link,” explains Bimla Madavan, a senior counsellor. “We do assessments on the spot looking at emergency needs, identify any gaps and link people with the services they need.”

While flattened houses, destroyed crops and flooded villages are easier to identify, the psychological toll are not immediately apparent and can be pushed aside while families focus on securing food, water and shelter.

Counsellors such as Ms Madavan, Ms Chand and Sisilia Siga report finding evidence of depression, grief and trauma among affected communities trying their best to recover some version of normalcy. Ms Madavan tells of children running back to the place they sheltered when the wind comes up or it gets cloudy.

“On the islands, the children are having nightmares,” adds Mrs Siga, who covered the Lomaiviti and Lau island groups. “They are waking in the middle of the night hearing the waves crashing and asking their parents to move to higher ground. They are afraid it is happening again.”

“We can see the pain in their eyes, in their hearts,” Ms Madavan continues. “They are back to square one and they have so much grief. At this time, we can only supply a listening ear and a shoulder to cry on.”

UN Women provided immediate funding to Empower Pacific to ensure their counsellors could get into the field as quickly as possible. Further funding is being provided to help fund follow-up visits, counselling and case management as well as initial assessments in isolated communities.

“As a person, the fact that I got the chance to go out and be of use to those who were so vulnerable, I find it a privilege and we would not have been able to mobilise without support we received from UN Women,” Ms Chand says.

UN Women’s Representative in Fiji Aleta Miller says assessments such as those conducted by Empower Pacific are crucial for identifying and addressing the specific needs of women and children.

“We have received reports of women feeling unsafe in evacuation centres, sexual harassment, increased workload and stress. Having this information early in the response means we can move quickly to work with Empower Pacific and other partner agencies to ensure that measures are put in place to prevent violence against children and women, and that women have access to important information and services.”

As an example, Ms Madavan points out that some of the evacuation centres were not equipped with bathroom facilities – or they had been damaged – so women had to go back into the village to use the bathroom. To help lower the risk of assault or harassment, the counsellors help put in place a back-up safety plan, advising women and children to go to the bathroom in groups, rather than on their own or only with their husbands.

Despite trauma and devastation, Ms Madavan says what really stood out is the bonding within and between communities.

“It brought them together to support each other. We are all caring for each other.”

The Ending Violence against Women and Girls programme is a five-year initiative aimed at helping women and girls live a life free from violence. It has been designed around international and Pacific evidence that promotes a holistic approach and supports Pacific-led activities to improve the policy environment as well as to meet the immediate needs of women who are experiencing violence.

One of the programme’s key components is the Pacific Regional Ending Violence against Women Facility Fund (Pacific Fund) which was established in to help fill the gaps in funding and capacity experienced by Pacific organisations working in this sphere. It offers grants of up to US$100,000, extensive capacity building and technical support to Pacific civil society organisations and government departments to support specific initiatives aimed at the prevention and elimination of violence against women and girls. The Pacific Fund is principally funded by the Australian Government.

UN Women also provides technical assistance and support to governments and civil society organisations across the Pacific that are addressing VAW, with a particular focus on supporting the adoption and implementation of laws, policies and plans.

UN Women and the Multi-Country Office (MCO) in Fiji

Related News
17/09/2018
Press release: Emergency Preparedness, Response and Recovery Project for Palau
02/10/2017
Diverse and Local Humanitarians Essential for Disaster Preparedness and Response
22/02/2017
Fijian community organizations leading response
19/08/2016
Gender and Protection Paving the Road for Humanitarian Response in the Pacific
18/08/2016
Disasters: What’s gender got to do with it?
END_OF_DOCUMENT_TOKEN_TO_BE_REPLACED