Phnom Penh, Cambodia – She’s a science teacher by day, an aspiring filmmaker by night. Sokyou Chea is making a name for herself in Cambodia’s filmmaking scene with a short debut film that explores how education can transform lives, as it did her own life. 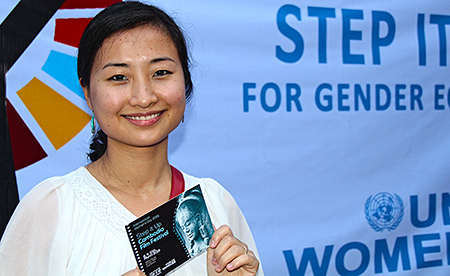 The Ride, which Ms. Chea produced, wrote and directed, made it to the finals of Tropfest 2015, the world’s biggest short film festival. It was screened at the March 8-10 Step It Up Cambodia Film Festival in Phnom Penh, which UN Women organized to mark International Women’s Day.

Yet her background has little do with filmmaking. Ms. Chea, now 30, was born in Cambodia but moved to Viet Nam when she was 12 and then studied in Singapore and in the United Kingdom. After getting a BA in physics from the University of Manchester in 2012, she moved back to Cambodia to teach science at an international school. Apart from pursuing her love for the art of storytelling by making The Ride, Chea has also translated educational videos for BBC Media Action, the broadcaster’s international development charity.

Ms. Chea’s film highlights the themes of family, hope and love. In seven short minutes, the film follows the heartwarming story of two sisters joined by a strong bond. The sisters live with their grandmother in a village by the Mekong River, to the east of Phnom Penh. Their mother, who works in Phnom Penh, sends a letter to the grandmother informing her that she is taking the younger daughter to Phnom Penh to further her education. The sisters say their goodbye riding a merry-go-round (hence, the title of the film).

The story reflects the harsh economic realities facing many people in Cambodia. The film’s subtle reference to the grandmother’s illiteracy, coupled with the pragmatic choice the mother makes regarding her daughter’s education, are reminders of the important role of education in alleviating inequality from one generation to the next. “Education is one of the main keys to end the poverty cycle,” Ms. Chea said. 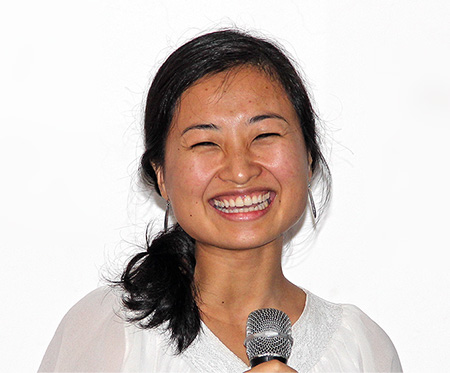 Ms. Chea based many of the film’s characters on the people that shaped her own life. With an all-female cast, the film echoes the strong bonds she shared with her own grandmother and sister.

The young lead actresses faithfully portray the innocence of youth although none had any previous acting experience. Ms. Chea cast women from her own life: The “older sister,” as well as the child extras, are from a children’s aid NGO where Ms. Chea used to volunteer. The “younger sister” is from a neighbourhood where she used to live. The “mother” was a cleaner in her apartment in Phnom Penh. The “grandmother” lives in the village where the film was shot.

Ms. Chea decided to make the film after seeing an advertisement for Tropfest. She said she had a few technical difficulties, especially with controlling the sound and the people around the shooting locations. It also took a long time to scout the merry-go-round location. However, people strongly supported her in her desire to finish the project. “If you have a vision, you just have to go for it!” Ms. Chea said in an interview with UN Women.

Ms. Chea is now working on a stage play that aims to teach young people about the Khmer Rouge rule of Cambodia in the 1970s, during which more than 1 million people – including a generation of educated people -- died from executions, forced labor and starvation.