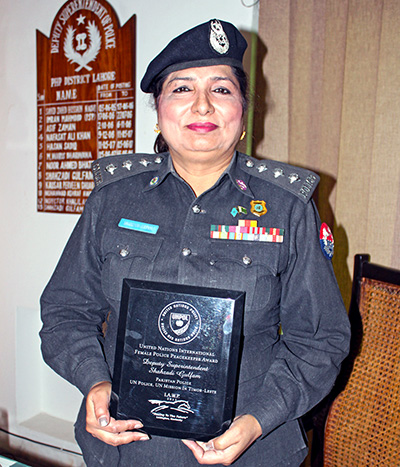 Shahzadi Gulfam has had the pleasure of serving in 4 different UN peacekeeping missions. In August 2011 she was awarded the first-ever UN International Female Police Peacekeeper Award for her many years of achievements including supervising 150 police officers conducting criminal investigations, and being the first female to represent Pakistan in the UN’s Mission to Bosnia Herzegovina in 1997.

Currently she is a Deputy Superintendent of Police in Punjab, Pakistan.

As a female role model for policing and peace keeping, could you tell us something about your childhood?

My childhood was spent in the small village of Pingali, just in suburb of Lahore, the Provincial Capital of Punjab. Both my parents, especially my father, wanted all of their children - sons and daughters alike - to be educated in a manner where we could contribute back positively to the society that raised us.

I took my studies and extra-curricular activities very seriously - I loved sports! By the time I was 16 years of age I had passed my Matriculation exams with very good marks and received many sports awards. Matric exams for many Pakistani girls would signal the end of her educational journey. I was one of the luckiest ones as I was sent to city for further studies - this was just the beginning for me.

Who has been the greatest influencer in your life?

My father “Sahibzada Ghulam Ali” was a hard task master, gentle yet firm - he was my supporter and role model in my academic studies as well as in sports. He confronted all family objections when I wanted to study further. He was the one who made the bold decision and sent me to Lahore for college and university studies. With my father’s coaching I excelled in inter-university sports at both national and international levels. Sadly, I lost my father at the end of my fourth and last mission in 2012 – his health had fast deteriorated and one night he passed away in his sleep. To live a life without him was unthinkable, however in the end it was the same courage he had instilled in me that pulled me through the difficult and painful days.

How and why did you enter the police force?

In 1985 when the Punjab Police announced recruitment of women police officers I immediately and instinctively knew what I had to do. I guess it was because of my childhood fascination with “uniforms”. Seeing a woman police officer - their confidence, authority and grace - was a rarity. As a young girl I had always dreamt that one day I too would join the police force, wear a uniform and serve my country.

A combination of cultural values, family traditions, social backwardness, illiteracy and ignorance prevented Pakistani women joining the police or armed forces - these were considered the domain of men. Nurses, doctors and teachers were considered a “safe” careers for young girls – but I wanted to be a police woman! With my father’s nod of approval, I joined the Punjab police force as an Assistant Sub-Inspector. The training was challenging, strenuous and demanding.

Was it difficult working in a male-dominated field? What were the obstacles and challenges faced, if any, and how did you overcome these?

What was worse was the prejudice and discrimination received from a few male colleagues during my training days. Following my training I was posted to the city of Rawalpindi as an Investigating Officer within many stations, including the Special Branch of Police. Fieldwork was very demanding and as a female I faced a number of “prejudices” more so from citizens who had never had dealings with female police officers. I had to be very tactful when dealing with the public and even with my force.

Can you tell us about your peacekeeping missions, including concerns and experiences?

It was in 1997 when I was selected for my first UN peacekeeping mission. It was an unbelievable moment for me! I was the first woman police officer from Pakistan ever to be selected, and this was also my first opportunity to go overseas and work with police officers of different nationalities.

During my one year in Bosnia Herzegovina (a country torn apart by civil war) and where I was posted as a Patrolling & Background Certification Officer, I witnessed for the first time horrible atrocities against humanity. It was most probably the strict discipline of my training and uniform that kept the tears from coming to my eyes. This “dark side” of mankind made me more determined to help those who really needed it, even if it meant risking my own life! This experience taught me to rise above color, creed and religion, and reach out to those whose lives were “literally hanging on a thin thread”.

My second peacekeeping mission was to Kosovo, in 1999 to 2001 as a Recruitment & Selection Officer. Here I was tasked to encourage local girls to join the police force and to train newly recruited police officers.

In 2007 and 2010 I was deployed to Timor-Leste. My last peacekeeping mission was to Timor-Leste and ended in 2012. It was in June 2011, whilst here, when I was informed of my nomination for a UN Peacekeeping Award in USA. This was a dream come true - I knew I had made my parents especially my father, the proudest parents ever.

As a peacekeeper did you ever have to deal with any hostile or frightening situations?

The most painful moments on mission were interacting with the many victims of abuse and violence - from broken marriages, prostitutes, victims of illegal human trafficking or abused children. I could feel their pain deep in my heart because at the end of the day I am human too.

What would you say is key to improving women’s representation in public participation?

Women are taking a proactive role in building our society and societal mindsets need to keep changing, for the better. Today I see young women contributing positively in every walk of life. They are joining the police force, armed services and becoming fighter pilots - these jobs were unimaginable for girls in my younger days. Though prejudices and discrimination against working women has reduced significantly, in my view a lot still needs to be done and that includes educating every child.

What one message would you give to women and girls to address barriers that limit them from ‘living their dream’?

Well, my message to the young girls living in developing countries is that they must focus on their studies. Aim high and put your honest and sincere efforts to achieve your dream. Obstacles and hardship will come in your way but if you are determined then God will definitely extend His help through some unknown and unexpected source.

Related News
24/05/2022
Inspiring Voices from Pakistan
24/06/2021
In the words of Maria Mahmood: “I am proud to be the voice of the voiceless”
24/06/2021
Building trust: Pakistan police address barriers to women's access to criminal justice
15/08/2017
From where I stand: “Peace is not an overnight miracle. Everyone needs to contribute to build peace”
08/06/2016
Honoring Pakistan's Peacekeepers - Serving the World for Peace
END_OF_DOCUMENT_TOKEN_TO_BE_REPLACED