Dili, Timor-Leste – With the support of the Japanese Government, UN Women Timor-Leste launched a new four-year, 294 million Japanese Yen (USD 2.74 million) project that aims to support the implementation of the United Nations Security Council Resolution 1325 in Timor-Leste. Resolution 1325 is the first of 8 resolutions that call on Member States to recognize women’s leadership and participation in all matters of peace and security. Toward this end, the project will partner with the Ministry of Interior, Secretary of State for Support and Socio-economic Promotion of Women, among other national institutions and civil society organizations, working at the national level and in the municipalities of Baucau, Covalima and Oecusse. 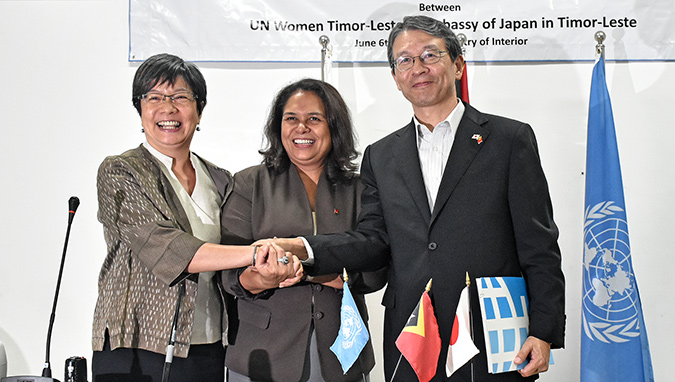 The Project will specifically contribute to the implementation and monitoring of Timor-Leste’s recently approved National Action Plan on Women, Peace and Security, developed under the leadership of the Ministry of Interior, with UN Women’s support. Illustrating the commitment behind the NAP-WPS, the Minister of Interior, H.E. Longuinhos Monteiro, stated, “the NAP-WPS is important because it is goes hand in hand with CEDAW, and we need to implement both to promote women’s participation and gender equality”. The Plan aims to strengthen women’s participation and leadership in security and justice sectors, promote more inclusive conflict prevention processes, improve protection for women from violence, and ensure that progress in peace building and development reaches all community members.

The Project responds directly to H.E. Prime Minister Shinzo Abe’s 2013 statement on the significance of developing and implementing a National Action Plan on Women, Peace and Security for Japan, and interest in supporting the work of UN Women, as part of its policy priority on creating a society where ‘all women shine’. “Prime Minister Shizo Abe attaches great importance to the promotion of women, including in Timor-Leste. Our contribution to this project is the fulfillment of such commitment,” said H.E. Eiji Yamamoto, Ambassador Extraordinary and Plenipotentiary of Japan to Timor-Leste. The Project follows on H.E President Taur Matan Ruak’s visit to Japan in March 2016 and will contribute to continued regional learning and exchange on women, peace and security.

UN Women’s Country Representative in Timor-Leste, Janet Wong remarked, “Women were at the forefront of resistance and the struggle for independence. They continue to be a powerful force post-conflict, during nation building and State building towards peaceful development. The agreement between the Government of Japan and UN Women marks a commitment to deepen the collaboration with the Government of Timor-Leste in strengthening accountability towards the people and particularly women of Timor-Leste in building a nation and a State that is peaceful and prosperous, today and for generations to come.”

Related News
22/09/2022
women and peace plan in the Philippines’ Bangsamoro region
15/07/2022
UN Women works with the Government and civil society on training to protect women and children from conflicts in Aceh, Indonesia
08/02/2021
Choosing to Change the Narrative, 44 Youth Make Use of Digital Tools to Counter Hate Speech and Promote Social Cohesion
19/10/2020
In the words of Habiba Sarabi: “Our vision is of an Afghanistan where every woman can live in peace and recognize her rights”
03/07/2020
The power of community advocacy and healing for women survivors of violence
END_OF_DOCUMENT_TOKEN_TO_BE_REPLACED