Ha Noi, Viet Nam – The Government of Republic of Korea (the ROK Government) and UN Women signed a USD 300,000 agreement to improve the hygiene and sanitation conditions of 15,000 women and girls in 7,500 poor and near poor households in 6 drought stricken districts in Central Highland and Mekong Delta provinces in Viet Nam. 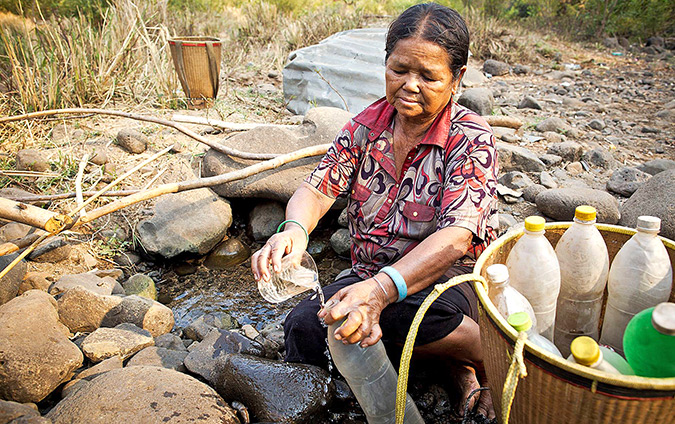 “The ROK Government is pleased to partner with UN Women in providing humanitarian aid to support relief efforts in Central Highland and Mekong Delta region of Viet Nam. In line with ROK Government’s initiative for Better Life for Girls, we hope the support will have a meaningful impact in improving sanitation and hygiene conditions of women and girls in the drought affected areas and in reducing the risk of secondary effects such as disease outbreaks. The ROK Government will continue to support efforts to address climate change in Viet Nam, including by sharing experience and knowledge on sustainable environment and climate policies” said H.E Mr. Lee Hyuk, Ambassador of the Republic of Korea to Viet Nam.

As a result of El Nino, provinces in the Central and the Central Highland regions of Viet Nam have been experiencing severe drought since the beginning of 2016. Two million people, including one million women and 520,000 children, are experiencing insecure access to water, sanitation and hygiene and require urgent humanitarian assistance. Lack of access to clean water and sanitation has increased health risks, particularly to women. Due to the impact of the drought and saltwater intrusion, women spend an additional two to three hours collecting water for their families than normal.

The support from the ROK Government will help women in poor, near-poor and female-headed households in highly drought and saltwater intrusion affected communes in Ca Mau, Kon Tum and Gia Lai provinces. Funds will be used to prevent the spread of diarrhea, dysentery, hand, foot and mouth diseases, dengue and skin by donating supplies and raising awareness of the importance of sanitation practices and good nutrition for women. The grant will also support income generating activities.

“This grant from the ROK Government helps us deliver essential items like soap and sanitary products to women in the drought affected areas to maintain the hygiene of themselves and their families. These supplies will prevent disease and help women and their families stay healthy”, said Shoko Ishikawa, UN Women Country Representative in Viet Nam.

In addition to the Korean grant, UN Women also received USD 400,000 from the Central Emergency Response Fund to support 20,000 women and girls in drought affected provinces. UN Women is working as part of a wider coordinated UN emergency relief effort. Emergency interventions will be implemented in coordination with Viet Nam Women’s Union at central, provincial, district and commune levels. Through the Women’s Union networks, UN Women will also work in coordination with local Disaster Management and Government structures such as the Committee for Natural Disaster Prevention and Control and the People’s Committees.

In March 2016, the Government of Viet Nam extended a call for assistance as 18 of its 63 provinces suffered from the most severe drought in more than 60 years. The Mekong Delta, South Central and Central Highland regions are the most affect by salt intrusion and water scarcity. The Government of Viet Nam, the United Nations and partners have appealed to the international community to support a USD 48.5 million emergency plan to respond to the humanitarian situation.

Related News
10/03/2021
Cash handouts provide lifeline to vulnerable women in Viet Nam facing double impact of pandemic and flooding
16/08/2022
UN Women co-hosts hybrid Forum on developing Viet Nam’s plan on women and peacebuilding
12/07/2022
UN Women supports Viet Nam’s MPS officials in capacity building for United Nations peacekeeping and international policing
05/07/2022
In the words of Aileen U. Hualde
01/07/2022
The rights and needs of women and girls must be at the centre of the humanitarian response to the earthquake in Afghanistan
END_OF_DOCUMENT_TOKEN_TO_BE_REPLACED