For female migrant workers, problems can begin at home

Singapore — From the very outset, Myint's search for work to support her family had to be conducted outside the law. Like thousands before her, the frightened young woman from Myanmar was recruited by a Yangon labor agency in defiance of a temporary ban enacted by the military government in 2014 on domestic workers seeking jobs overseas. With no means to check the reliability of the agency or the two-year contract it offered, she fled her job when she was forced to clean and cook for three separate Singapore households and received none of her pay for eight months. 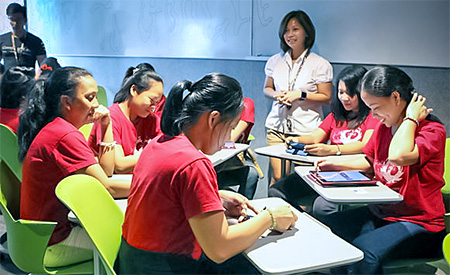 A training class for domestic helpers in how to use Google, run by HOME, a Singapore migrant shelter and counselling center. Photo: Courtesy of HOME

"I come from Shan State, very dangerous," Myint explains as she sits in a shelter run by HOME, a migrant rights organization that works with the United Nations agency, UN Women Regional Office for Asia Pacific. Beside her, an older woman, who also fled from conflict in Myanmar, describes how she escaped from a bullying employer and her lecherous grandfather. She had to clean windows of an apartment on a dangerously high floor and she was never allowed a single day off. While Singapore prides itself on the rule of law, the stranded women, unpaid and without visa status, will have to wait six months or more for the resolution of their cases.

"Even then, there's no transparency about the results, no binding legal recourse," explains Jacqueline Tan, director of HOME. While the 10 members of the Association of Southeast Asian Nations accepted the broad principle of free movement of labor as part of the ASEAN Economic Community, launched at the end of 2015, it does not apply to unskilled labor. There are also many conditions applied to migrant labor generally. Singapore, for example, "doesn't recognize any of the laws of the sending country, whether to provide rest days or enforce a maximum one-month agency fee," Tan noted. "Domestics are exempt from labor laws or workers' compensation. Yet the government strictly enforces a ban on migrant women marrying a Singaporean without state permission." 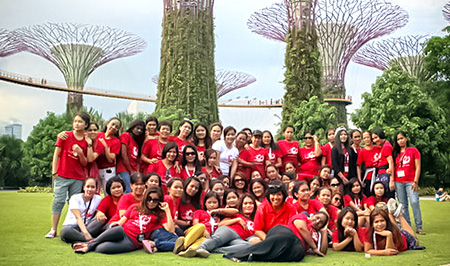 An outing of domestic helpers to Singapore’s Marina Bay Sands -- women workers from Myanmar, the Philippines, Indonesia and India who have taken shelter from abusive employers. Photo: Courtesy of HOME

It is unskilled migrants who probably do more than any other group to unify ASEAN when they cross borders, yet they have come to know more about the region's pitfalls than its potential. This January marked the 10th anniversary of the ASEAN Declaration on the Protection and Promotion of the Rights of Migrant Workers, under which members pledged to "promote fair and appropriate employment protection, payment of wages, and adequate access to decent working and living conditions for migrant workers."

In addition, all ASEAN countries are among the 196 signatories to the seminal United Nations Convention on the Elimination of All Forms of Discrimination against Women. As ratified in 1981, its general recommendation No. 26 specifically guarantees women migrant workers "the right to be free of degrading and inhumane treatment."

Yet ASEAN continues to exemplify the sage dictum of the 19th-century French writer Honore de Balzac: "Laws are spider webs through which the big flies pass and the little ones get caught." The vast majority of expatriate women working in a region where an estimated 20 million or more people live outside their country of birth move through an unprotected and extralegal underground networks. The policies intended to protect women migrants can actually have the opposite effect, making them "even more vulnerable to exploitation," according to a spokesperson for the International Labor Organization.

In Myanmar, while a national census in 2014 put the official number of citizens working in Thailand at more than 1.4 million, the actual number is more than 3 million, all of whom are forced to live outside legal channels. Only one ASEAN member, the Philippines, known for its huge dependence on overseas workers, has agreed to honor the ILO's 2011 Domestic Workers Convention No. 189, which sets basic standards when it comes to such issues as workers having to pay excessive portions of their salaries to unscrupulous recruiters.

Around 800,000 Cambodians, according to Socheath Heng of UN Women in Phnom Penh, are drawn to jobs in construction and agriculture in Thailand. Yet, most migrants who flood across the borders are undocumented and legal protections are virtually non-existent. In addition, "the labor law in Cambodia does not include protection for domestic workers and amending this is a very slow process," he said. Villagers are regularly cheated and given forged documents. The larger problem is that countries sending workers abroad have little leverage over host countries, he added. 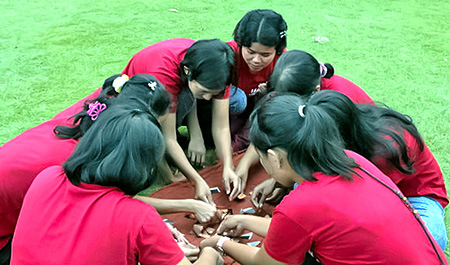 Women migrants in Singapore work together to solve puzzles on an outing from the shelter many inhabit for months. Photo: Courtesy of HOME

Malaysia, whose legal culture is strongly influenced by British laws from the colonial era, is a major importer of migrant labor, but many expatriate unskilled workers face discrimination and legal difficulties, say labor rights activists. In one recently publicized case, a woman went to take the place of her sick husband in a Malaysian factory, but when the employers refused to give her medical clearance despite a checkup, she was left unpaid by recruiters and lost the house and land she had mortgaged back home.

In Hong Kong, many undocumented domestic helpers from the Philippines share boarding houses and pool knowledge to escape detection while unscrupulous agents hold their passports. Many overstay illegally for years to earn whatever minimal terms and conditions employers offer.

In Singapore, where there are around 237,000 domestics working in about 20 per cent of the households, no statistics are kept on their countries of origin because that is considered "politically sensitive," according to Stephanie Chok, research consultant for HOME. "Workers are not supposed to pay more than one month's salary as a fee, but that is violated regularly. And we are seeing more women under legal age, just in their teens."

In Myanmar, a country where UN Women estimates the unemployment rate among women is 48 per cent, legislation concerning trafficking and violence toward women remains weak. Natural disasters, like the destructive Cyclone Nargis in 2008 that was estimated to have killed about 140,000 people, have added impetus to leave home, "though sometimes the [recruitment] agencies themselves don't know what they are getting the women into," said Melanie Hilton, a specialist on gender violence and discrimination at UN Women.

Amid the difficulties in Myanmar, there are signs of hope for migrant women workers. The recent democratic transformation in Myanmar has allowed the formation of many civic groups, including those speaking for unskilled workers who go abroad. Among these is the 88 Generation, named for the student activists jailed after the 1988 protest against the military junta, and the Migrant Workers Rights Network. Leaders of this group cite priority issues such as lack of access to information in rural areas, unequal wages, sexual harassment, no control over labor brokers and the absence of complaint mechanisms.

For UN Women, spearheading advocacy for "gender mainstreaming" in new laws, progress can be measured through the negotiating of better bilateral agreements. Where there has not been much "synergy around migrant issues," Hilton noted, "countries of origin and destination should ensure that agreements are customized, that they have key protection standards for women migrant workers and enforcement mechanisms that are monitored regularly."

There are reports that Malaysia is considering the adoption of a "zero fee" regulation for migrant domestic workers, which is one of the most important provisions of the ILO compact. Apple, the consumer electronics company, has said it will enforce this measure for its migrant workforce. Aside from the work of HOME, there is a Singapore nongovernmental organization called "Trans-National Workers Count Too."

The very success of ASEAN's economic ambitions is threatened until such conditions are tackled. After all, as Ruchika Bahl, regional migration manager for UN Women ROAP in Bangkok, said: "Considering they make up nearly half of the total intra-ASEAN migrations, it is worth enquiring as to how many women migrant workers will benefit from the 14 million new jobs expected to be created over the next decade."

So far, the ASEAN Economic Community "has confined itself to skilled migration whereas documented and undocumented women migrant workers dominate unskilled work, making them unlikely to benefit from the economic integration," Bahl added.

"The safety of the people shall be the highest law," the Roman statesman Cicero said 2,000 years ago. A decade years after ASEAN's declaration on migrant workers, millions of women remain unsafe, trying to benefit from that higher law while waiting for the man-made kind of the 21st century.

Related News
09/12/2020
“I will continue to fight for the rights of women migrant domestic workers in Singapore.”
14/02/2017
Domestic worker rights video gets a staggering 15 million views in just one week
01/02/2022
In the words of Tarikul Islam
22/12/2021
Cooperation Key to Ensuring Rights-based Migration in Asia-Pacific
30/11/2021
Knowledge Hub on Labour Migration in South Asia Launched
END_OF_DOCUMENT_TOKEN_TO_BE_REPLACED