Vientiane, Lao People’s Democratic Republic – By taking photos of everyday life around them, a group of students at Vientiane High School have learned the value of all the work that women do in the society and in the family.

Earlier this year, UN Women and the International Labour Organization held a series of discussions with the students about women’s rights and women’s work, and organized photography training so the students could go out and document the theme, “All Women Are Working Women.” The seven-week program reflected UN Women’s belief that advancing women’s rights requires changing social norms, and young people must be engaged in that process.

The students first visited the market with their teacher, and later went out on their own to take pictures. One visited her father at a health clinic and photographed nurses caring for a baby.

To mark International Women’s Day on March 9, an exhibition of 21 of the student photos was opened at the French Institute. The photos showed a mother cradling her baby, an office worker, street peddlers, vegetable sellers, a cook, health workers, the young, the old, the happy, and the tired – all women.

“I now understand how important it is that young women can choose what they want to do with their lives and also choose the job they want to have,” said one of the female students. 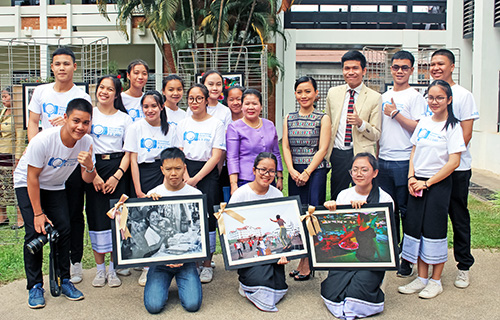 Evy Messell, UN Women’s Senior Gender Advisor, said that after the photo exhibition launch, “the students came to me several times to discuss and ask about their right to choose what they wanted to become and what kind of education was required. They also wanted to discuss their right to work after they are married.”

Frederika Meijer, UN Resident Coordinator, said at the ceremony that women and girls make up a high proportion of the labor force in the Lao People’s Democratic Republic, but many of them also are “unpaid family workers”. “Mothers often carry double burdens as workers during the day and caregivers at night, while they earn only two-thirds of what men do,” she said.

Viengsouvanh Phaxaysombath, Principal of Vientiane High School, said, “The students understand the importance of International Women’s Day. They are aware that their lives are intertwined with the lives of their mothers who work for their families both inside and outside the house.” 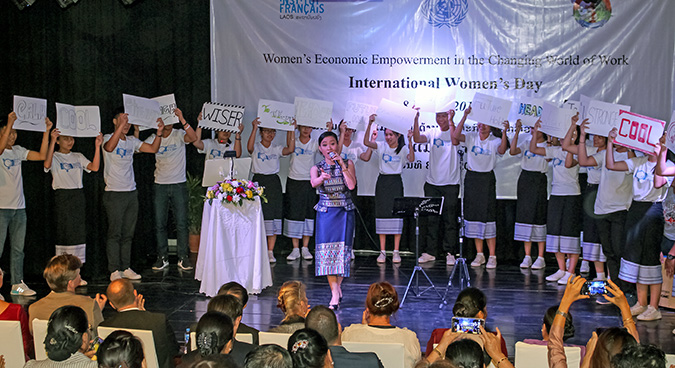 The International Women’s Day celebration also included a mini-concert at which the well-known Lao singer Aluna sang songs about women’s empowerment on stage with the students. The songs included one that Aluna had written for the United Nations’ UNiTE Campaign to End Violence against Women. The students held up placards with key words from the songs, like “strong,” “courageous,” “independent,” and “cool”. 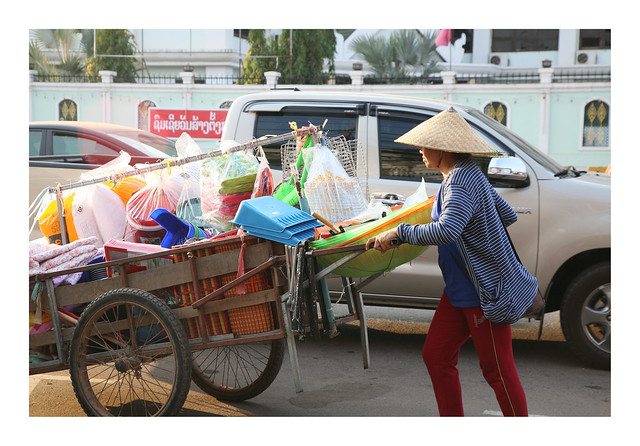 Check out the gallery of 21 student photos.

Related News
21/06/2021
Keomouangluang’s journey: From migrant domestic worker to mushroom entrepreneur
09/12/2020
“It is more important than ever that women migrant workers know where to get help.”
16/04/2019
Empowering the invisible mine victims in Lao PDR
01/03/2017
Take five: “Women in the organization view themselves as leaders”
27/11/2015
Gender Equality is A ‘Silver Bullet’ for Development: Helen Clark
END_OF_DOCUMENT_TOKEN_TO_BE_REPLACED