The photo exhibition on Safe Labour Migration for Women on 5 May 2017 at The Mansion. Photo: UN Women/Sreynich Leng

Phnom Penh, Cambodia — “I now understand more about migration since I joined this photo contest. Before, I only knew that migrants sent home remittances. I had never thought deeply about their safety and the challenges they face,” said Sorn Sokkheang, 24, who won second place in the Youth Photo Contest on Safe Labour Migration for Women organised by UN Women Cambodia.

The purpose of the photo contest was to raise young people’s awareness on the issues women migrant workers are facing. Almost a third of Cambodia’s population migrate internally, often working in construction, garment manufacturing and domestic work. Many Cambodian workers migrate to other countries, often as undocumented migrants who are more vulnerable to abuse and exploitation without proper social protection or means to access justice. It is estimated that there are as many as a million undocumented Cambodian migrant workers in Thailand[1] alone. Many poor families largely rely on the remittances from family members who have migrated. Despite the harsh reality migrant workers face, they choose the journey for better income to sustain their families. Chhenghour Veng (Left) and Vichny Yuong (right), one among top eight photo contestants, is expressing her impression during the photo exhibition on 5 May 2017. Photo: UN Women/Sreynich Leng

UN Women Cambodia’s photo contest became a means to tell the story of women migrant workers to the public on the different scenes of their journey. Sokkheang, who is also a reporter for the CNC TV Channel said, “As a media practitioner, I have the opportunity to raise public awareness of this issue. I can share information about the advantages and disadvantages of migration work and publicise the ways that women migrants can make decisions and protect themselves, such as by using legally recognized companies and how to seek help if they are cheated.” Doung Theary, 25, working in Thailand as a cleaner to support her family. She earns about 300 USD per month which is much higher for a similar work back at her home country in Cambodia. Photo: UN Women/ Chhenghour Veng

Supported by the Government of Australia, the exhibition was open to public for three weeks at The Mansion, an exhibition space in an old Colonial villa in central Phnom Penh. It was also an opportunity to showcase the creativity and skill of the young photographers. “The medium of photography deepens our understanding of important social issues like migration by giving them a human face,” said Sarah Knibbs, UN Women Deputy Representative, speaking at the exhibition opening. She added, “Migrant women make an important contribution to their families and to the Cambodian economy but they are often invisible. These photos raise our awareness of the hardships they face, but also show their strength and resilience.” 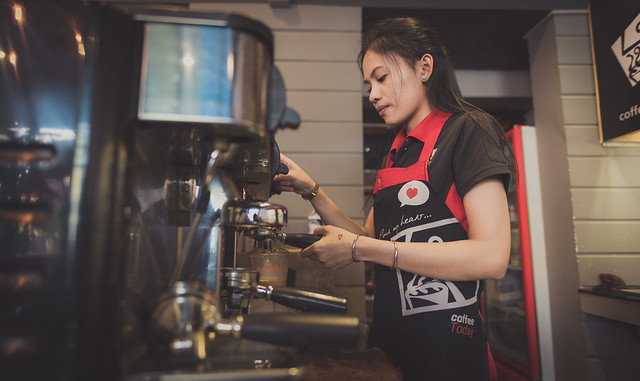