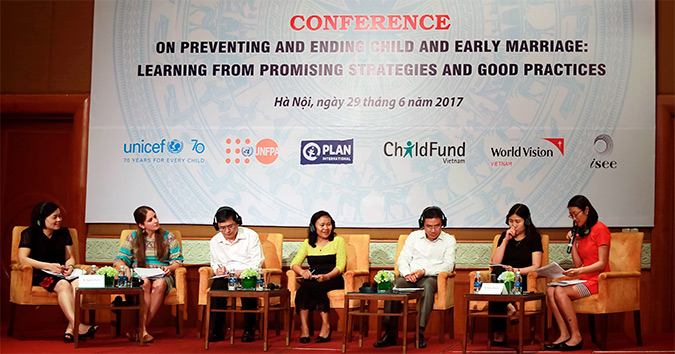 Panelists at the conference discuss how to deal with the difficult problem of child marriage. Photo: UN Women/Thao Hoang

Ha Hung, Vice Minister and Vice Chairman of the Committee on Ethnic Minority Affairs (CEMA), made the comment at a 29 June national conference on Preventing and Ending Child and Early Marriage that UN Women helped organize. More than 100 experts from international organizations, governmental agencies, local organizations and academia discussed national and international experiences and strategies for Viet Nam to reduce the practice.

Goal No. 5 of the United Nations Agenda for Sustainable Development includes the elimination of all harmful practices against women and girls, including child, early and forced marriage, by 2030. But while the legal age for marriage in Viet Nam is 18 for women and 20 for men, 11 per cent of women aged 20-49 had married or been in union before they were 18, according to a 2013-2014 survey by the United Nations Children’s Fund (UNICEF) and Viet Nam’s General Statistics Office. Moreover, communities lagging the rest of the country in socioeconomic development and gender equality have even higher rates of child marriage. Of 53 ethnic minority groups surveyed by CEMA and the General Statistics Office in 2015, 40 groups had rates higher than 20 per cent in 2014.

Conference participants discussed lessons learned about barriers to efforts to end early marriage. They identified ways for various organizations to collaborate in the efforts, and ways to integrate these efforts into development and socioeconomic programmes in Viet Nam, particularly in the ethnic minority regions. They agreed that government leadership and coordination of the effort was critical, along with the involvement of civil society groups.

Shoko Ishikawa, UN Women Country Representative in Viet Nam, said: “The key to breaking the cycle of child and early marriage lies with empowering and investing in women and girls. Every girl and woman at risk of or affected by child and early marriage must have equal access to quality services such as education and training, legal and health counselling, including for sexual and reproductive health, shelter and other social services. This requires all government bodies to ensure that their planning, budgeting, decision-making, policymaking, and monitoring reflect the needs of girls and boys, and that investments in girls’ empowerment are prioritized in all areas and all sectors.” 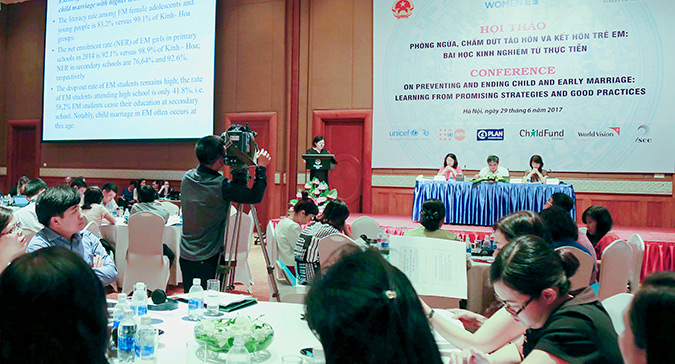 A statement of United Nations recommendations presented to the conference said more research and data was needed to determine what particular factors encouraged child marriage in particular communities, so that interventions can be tailored accordingly. Also needed, it said, is a “refined understanding of cultural norms and practices”-- not only those that tolerate child marriage but also those that may support efforts to eliminate it.

The recommendations at the conference will be sent to national government ministries and local agencies and oganizations so that they can put them into action.

The conference was organized by CEMA and UN Women, UNICEF, United Nations Population Fund and non-governmental organizations, with the support of Irish Aid and other funders.