Photo: Courtesy of the Indian Express

The Economic Survey of 2017-2018 assumes special significance for two reasons-one, it marks the last full Budget of the Government before the 2019 General Elections. Second, for the first time, the survey entails a dedicated chapter on gender, relaying a renewed focus on the most urgent challenge of our time. The chapter rightfully notes the gains made by the government in improving gender indicators and more importantly, offers an analytical method to capture the under examined issue of son meta-preference. In addition to recognising active gender-based sex-selection via foetal abortions, the survey underlines the need to look more closely at the practice of having children until the desired number of sons are born. Recent initiatives such as Beti Bachao Beti Padhao (BBBP), Sukanya Samridhi Yojana (SSY) and provision of maternity leave have been recognised as central in the trajectory of addressing these issues.

While India has fared well in 14 out of 17 indicators relating to agency, attitude and outcomes, the chapter identifies women’s employment, use of contraception and alarming child sex ratio as critical indicators where the progress has slowed or even declined. In fact, the argument that increasing household income has a direct relation to improvement in dimensions of gender equality is countered by the fact that “convergence effect is not visible” on women’s employment and sex of the last child. 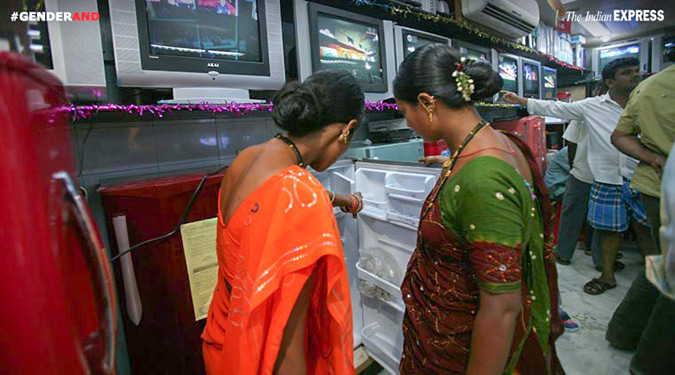 Gender Responsive Budgeting (GRB) has been accepted globally as an important and pragmatic strategy to advance women’s rights. Photo: Courtesy of the Indian Express

Women’s labour force participation in particular has severely declined over the last decade. At the same time, the economic survey misses in parts capturing various important aspects of women and work, including paid-unpaid, formal-informal, care or subsistence work. Thus, reaffirming the need to understand both gender and development as complex, systemic challenges that are entrenched not only in families and communities but also within larger political and economic systems and structures.

Although there has been progress on indicators such as women’s decision making related to their health, household purchases and visits to family and relatives as well as decline in physical or emotional violence experienced by women, issues such as limited personal autonomy to make reproductive choices underline the need for a comprehensive understanding of structural barriers to gender equality. Moreover, when dimensions such as caste, class, ability, migratory status, sexual orientation, access, location, age, among others, intersect with gender, inequality gets exacerbated.

Seen as an important step in addressing the issue, the survey recognises the feminisation of agriculture and calls for an ‘inclusive transformative agricultural policy’. This recognition comes on the heels of the 62nd Commission on the Status of Women which focused on empowerment of rural women and girls. It also comes at a time when the first ever national alliance for rights of women farmers – MAKAAM (Mahila Kisan Adhikar Manch) has brought to national attention the needs and concerns of this segment of the population. Mandatory earmarking of budgetary allocations from overall schemes as well as gender-specific interventions have been noted as important policy interventions to address the issues of women farmers. 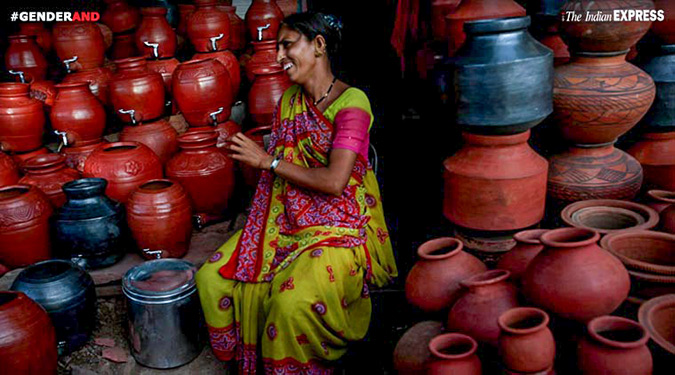 This recognition comes on the heels of the 62nd Commission on the Status of Women which focused on empowerment of rural women and girls. Photo: Courtesy of the Indian Express

Gender Responsive Budgeting (GRB) has been accepted globally as an important and pragmatic strategy to advance women’s rights. GRB is a method of planning, programming and budgeting that helps advance gender equality and women’s rights. It also serves as an indicator of governments’ commitment to meeting those needs. Government of India adopted GRB in 2005-06 with the introduction of its first gender budget statement, which made public the quantum of funds allocated by different ministries, and departments for gender equality and women’s empowerment. Consequently, 57 government ministries/departments have set up Gender Budget cells – a major step that could potentially impact the lives of crores of women.

However, it is critical to analyse the entire planning, budgeting and auditing spectrum to assess the extent to which the budgetary allocations are benefiting women and girls. Overall, the total magnitude of the Gender Budget Statement i.e. gender budget in proportion to the total union budget went up from 4.7 per cent in 2016-17 to 5.2 per cent in 2017-18. More specifically, the allocation for the nodal ministry, the Ministry of Women and Child Development (MWCD) saw an increase from Rs 17,640 crore (2016-17 Revised Estimate) to Rs 22,095 crore (2017-18 Budget Estimate) which is merely 1 per cent of the total Union Budget. Lastly, mandatory earmarking of funds such as in case of agriculture, where 30 per cent of funds have been shown to target women, serve a limited objective. The evidence on the ground suggests that men primarily own land. Therefore, the actual benefit that flows to women farmers is much less. Ground realities therefore have to be looked at right from the planning and design stage. With the Fourteenth Finance Commission recommendations now being implemented to strengthen a federal structure, it then becomes equally critical for the states to invest adequately in gender issues.

The chapter on Gender in the Economic Survey can be commended for its ability to articulate two of the most urgent issues — meta preference for a son leading to missing, unwanted girls and the decline of women’s participation in the workforce. While both issues can be located in societal and immovable cultural norms, they can be equally located in movable economic systems and structures. Addressing these barriers will need the gamut of stakeholders to converge and convene to develop a nuanced and shared understanding of structural barriers and addressing them through concrete initiatives.

Nishtha Satyam is the Deputy Country Representative of UN Women India MCO. The views expressed are her own.

Bhumika Jhamb and Niharika Pandit contributed to this piece. This OP-ED has been originally published on the Indian Express

Related News
15/06/2022
LinkedIn and UN Women join hands to create employment opportunities for women in APAC
30/11/2021
Knowledge Hub on Labour Migration in South Asia Launched
27/09/2021
From where I stand: “I want young Dalit women to be part of a society where they can voice their opinions and… dream of a life more than just basic”
16/09/2021
I am Generation Equality: Madhura Das Gupta, business leader and advocate for women’s economic justice and rights
27/08/2021
Reckitt and UN Women partnership to create employment and entrepreneurship opportunities for women in India
END_OF_DOCUMENT_TOKEN_TO_BE_REPLACED