Islamabad, Pakistan — The internationally acclaimed documentary play SEVEN is being performed in Pakistan for the first time and a special guest was in the audience: Mukhtar Mai, a gang rape survivor and women's rights activist featured in the play.

SEVEN had its Pakistani premiere with a reading in English on 20 November at the Swedish Ambassador's residence in Islamabad. Readers on stage were Rabiya Javeri Agha, Secretary in the Ministry of Human Rights; Retired Chief Justice Ali Nawaz Chowhan, Chairman of the National Commission for Human Rights Pakistan; Momina Mustehsan, an engineer, mathematician and musician; Mariyam Nafees, an actor, model and activist; Nighat Dad, lawyer, Executive Director and Founder of Digital Rights Foundation; Osman Khalid Butt, a TV, film and theater actor and writer; and Ingrid Johansson, Ambassador of Sweden to Pakistan.

The event was aimed at raising awareness about the importance of access to justice for survivors of violence, and to promote Pakistan's legal services and framework on violence against women, including the Federal Ministry of Human Rights' toll-free helpline (1099) and legal advice to survivors, and provincial laws such as the Punjab Protection of Women against Violence Act.

SEVEN tells the real-life stories of seven women's rights activists from Nigeria, Afghanistan, Guatemala, Russia, Pakistan, Northern Ireland and Cambodia. Casts of all kinds, including politicians, government officials, actors and activists, portray the seven women. The tour, now into its tenth year, has reached over 50, 000 people in more than three dozen countries.

UN Women, the Embassy of Sweden, the European Union Delegation to Pakistan and the Potohar Organization for Development Advocacy (PODA) organized the two SEVEN readings in collaboration with the Swedish Institute. Each person on stage read out the story of one of the seven activists.

"What is wonderful about this play is that while I am from the Government, there are participants here from the civil society, diplomatic core and the youth," said Ms. Javeri Agha. "It is hoped that the kind of mentorship these readers provide will be inspirational to the women of Pakistan. Hopefully this message will be disseminated further to even larger numbers of people." Islamabad Ambassador Ingrid Johansson of Sweden hosts the event and participates as one of the readers of at the premiere of SEVEN. Photo: UN Women/Haris Khalid

The second reading, this time in Urdu, was at held the Lahore University of Management Sciences (LUMS)on 24 November. Attending that performance was Ms. Mai, who was gang-raped in 2002 at the orders of a village council as punishment after her younger brother who was (falsely) accused of an illicit affair. She bravely spoke up, pursued the case and fought for justice, although almost all her alleged attackers eventually were acquitted. She now runs the Mukhtar Mai Women's Welfare Organization, which provides girls with education and gives refuge to homeless women and survivors of abuse.

The events were attended by about 150 people in Islamabad and 170 people in Lahore, including high-level officials, dignitaries, human rights activists and students. The tour of SEVEN in Pakistan runs until March. 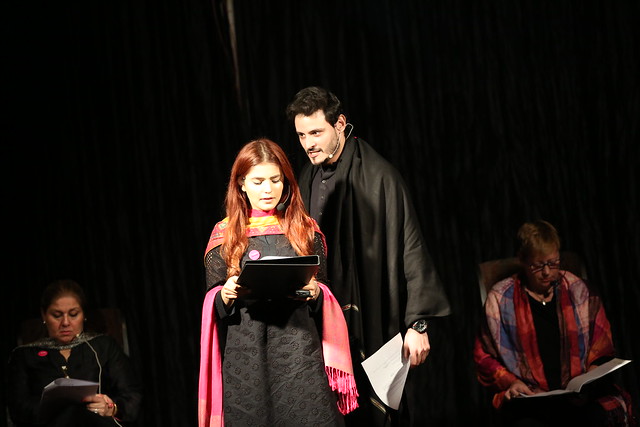