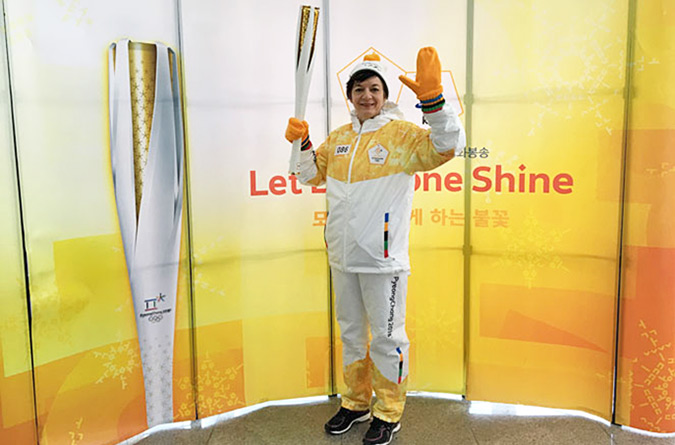 After five years of successful collaboration on women and sport, UN Women and the International Olympic Committee (IOC) recently renewed their commitment to continue empowering women and girls through sport and increasing women’s leadership and gender equality in the sport industry.

“I feel very honoured to carry this torch for the Winter Olympic Games representing UN Women,” said Ms. Broussard. “The Olympic Torch Relay is a symbol of peace and equality. UN Women runs for peace and for leaving no one behind,” she added.

Women have walked a long road to equality in the Olympic Games since women’s lawn tennis and golf started in Paris in 1900. Over time, more women’s events were added to the Games, but it was not until the 2012 London Olympic Games, when women’s boxing was introduced, that the modern-day Olympics included women in all sports.

UN Women actively uses sport as a tool for women’s empowerment around the world. For example, together with the IOC and Women Win, UN Women has piloted the innovative programme, “One Win Leads to Another” to empower young women and girls through sports in Brazil, leading up to the Rio Olympic Summer Games. The programme builds the leadership skills of adolescent girls through quality sports training, creates safe spaces for girls, and gives them knowledge and tools to break social barriers and access services when experiencing violence. One Win Leads to Another will be upscaled to additional countries in 2018.

Related News
12/07/2022
A woman uses soccer training to promote peace in Bougainville
11/08/2021
ASEAN-Japan sports figures and young leaders convene for gender equality in sports
16/10/2019
From where I stand: “I have to train harder to be seen at the same level as the male fighters.”
19/11/2018
Young educators in China are questioning gender norms and preventing violence
19/11/2022
Green Transitions Online Workshop Held in Beijing
END_OF_DOCUMENT_TOKEN_TO_BE_REPLACED