In Nepal, women have been under-represented in formal peace and reconciliation negotiations in the wake of the 10-year civil war that ended in 2006, and therefore their specific needs often overlooked. In particular, women victims of conflict-related sexual torture, rape and other forms of sexual and gender-based violence are yet to be formally recognized as conflict victims. As a result, they have been deprived of interim relief and recovery programmes introduced by the Government of Nepal in 2008.

The experiences of women, especially those who suffered sexual violence, have not been fully acknowledged as part of the history of Nepal's armed conflict. Too often women survivors and victims are silenced, discredited, or punished when they do come forward to share their experience of sexual violence and seek justice. Very few cases of conflict-related sexual violence have been documented and reported to the Truth and Reconciliation Commission. This raise concerns that many survivors and victims have not yet broken the silence.

The event was organized on 22 March by UN Women through The Story Kitchen, a local partner, under the One UN banner with the objective to strengthen the support and advocacy on the truth-telling process in Nepal. The event, supported by the Government of Finland and the European Union, is a part of continued efforts to strengthen the voice and agency of women survivors and victims of conflict-related sexual violence to demand accountability and access to justice.

The launch of a digital platform which included digital stories produced by the women survivors themselves and a powerful theatrical performance were the highlights of the event. The audience remained mesmerized by the innate digital stories that were screened. An art exhibition capturing the essence of these stories provided for an emotional ending to the event. It was staged to activate awareness about what we as individuals and members of society can do in the creation of an enabling environment for truth, justice, dignity and reparations.

On the occasion, Valerie Julliand, UN Resident Coordinator (UNRC) in Nepal, informed that addressing the needs of these women were of significant importance. She said that, “Truth telling is an opportunity to give space to the women victims/survivors of the armed conflict in Nepal, not only to tell their stories, but also to lay a foundation to support them and the country to move forward”.

In view of the positive response to the event, UN Women envisions to replicate it at the provincial level, adapting it to the local context and improving it based on the comments and recommendations received. 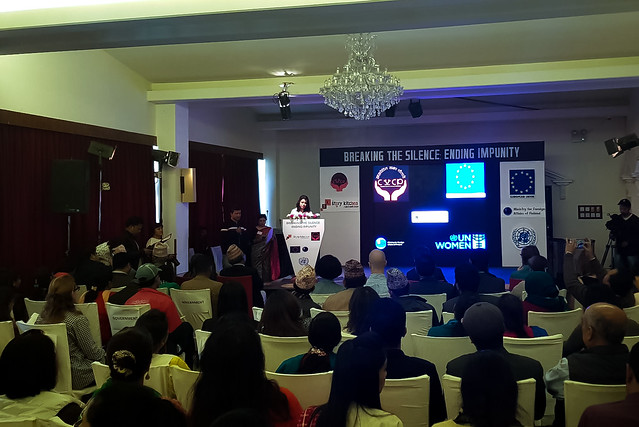