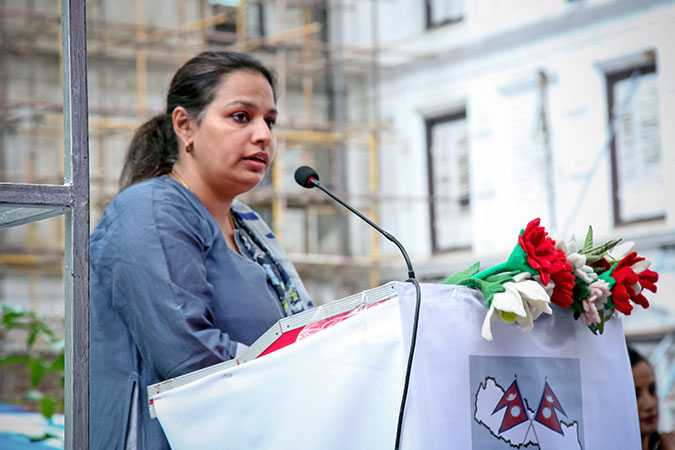 Gitanjali Singh, Deputy Representative, speaking during the International Democracy Seminar in Kathmandu. She said, “Nepal now has a momentous opportunity to advance gender equality and inclusive governance. There should be no going back.' Photo: Danish Institute for Parties and Democracy (DIPD)

Excellencies on the dais, honourable parliamentarians, distinguished guests,
Good Afternoon and Namaste,
UN Women is very pleased to have the opportunity to share our views on an issue that is very close to us and would like to thank DIPD for the opportunity. It is great for a change to be on a panel with more women than men.

First, I wish to congratulate you once again on the successful completion of last years’ three elections. The completion of the election marked an important step in the implementation of the new Constitution and provides the framework for a successful shift towards federalism. With this, Nepal stands ready to realize its international commitments towards inclusive governance, gender equality and women’s empowerment, all cornerstones in the Agenda 2030 and its Sustainable Development Goals.

The full participation of women in political life is not only a guarantee of their human rights, but an essential requirement to reach peaceful and prosperous societies[1]. Gender equality does not merely strengthen democracy. Without gender equality, there is no real democracy. Michelle Bachelet, the former President of Chile and the current UN High Commissioner for Human Rights, once said “When one woman is a leader, it changes her. When more women are leaders, it changes politics and policies.”

Globally, women are increasingly asserting themselves as voters. In growing numbers, they are running for public office. Where women’s political representation has increased, change has followed. Progressive laws have been passed—to secure land rights, to tackle violence against women, and to improve health care, reproductive rights and employment. 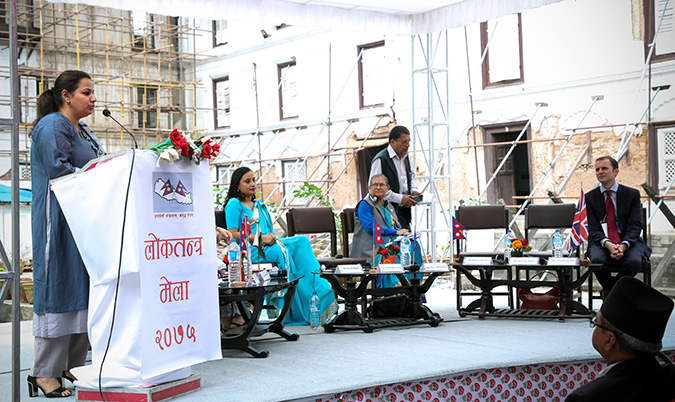 With 33.5 per cent women parliamentarians in the two houses of the Federal Parliament, Nepal is well above the global average of 23.8 percent women parliamentarians. The average for countries in Asia is 19.8 per cent. In fact, following last years’ elections, Nepal within Asia has the highest percentage of women in National Parliament. According to the IPU 2018 data for women parliamentarians, Nepal is ranked at number 37 out of 193 countries, Afghanistan 55, Pakistan 93, Bangladesh 95, India 147, Bhutan 170, Maldives 178 and Sri Lanka 180[2]. The elections of last year also saw dramatic increases of women’s formal representation as elected representatives at both the Provincial and Local levels.

However, globally the number of women in parliaments seems to have stagnated at around 23 per cent and women’s progress in politics has been painfully slow. According to the Secretary General of the Inter Parliamentary Union at this rate it will take 50 years to achieve 50-50 parity. We do need to step it up for gender equality.

While much progress has been achieved in terms of women elected representatives, the same cannot be said for women’s representation in the Government, or in the top leadership of political parties. Much work remains, to achieve gender parity in numbers – and in actual influence - in these institutions. The Committee for the Convention on the Elimination of all forms of Discrimination Against Women (CEDAW) has expressed concern about women’s continued low representation in most high-level decision-making positions, including public service and the judiciary.

In Rwanda, women made up nearly 50 per cent of parliamentarians after the elections in 2003. Today, that figure is 64 per cent. The incredible progress was spurred by special measures, starting with the 2003 Constitution that set a 30 per cent quota for women in elected positions, and political parties adopting their own voluntary quotas for women candidates on party lists. In 2003, barely a decade after the genocide, nearly 50 per cent of Parliamentary seats went to women. Even though women have continued to hold the majority of seats in the Parliament for several years now, many women leaders in Rwanda still find their competency and capabilities questioned. One member highlighted “Even attending trainings, there are people who think that we come to meet men, or for other business, which makes it hard to be trusted by our husbands”. Some women in decision-making positions have had to become less present at home, which has been perceived negatively by their husbands and been a trigger for domestic violence[3]. We have already heard some similar stories from locally elected women in Nepal. This is an important lesson for Nepal to reflect on.

India, witnessed the world’s largest experiment in grassroots local democracy, triggered by the 73rd and 74th amendment to the Constitution in 1993, which enabled over one million women to enter local decision making. The Act mandated the reservation of a minimum of one-third of seats for women (both as members and as chairpersons)[4]. 14 states have passed legislations reserving 50 percent seats for women[5].

Research in West Bengal has shown that community perceptions and expectations of the effectiveness of women leaders decreased after one term. However, following two terms of elected women representatives in the panchayats, the expectations on women’s effectiveness as leaders were higher than that of men. Change in social norms and deeply rooted structures – perceiving men as more efficient leaders than women – takes time. We need to have patience, and we need to provide ample support to the elected women representatives across Nepal.

In addition, the research in West Bengal clearly showed that exposure to elected women leaders increased parents’ aspirations for their daughters, as well as the educational attainment of adolescent girls in the studied areas. Elected women representatives thus have a role to play, not only as effective democratic leaders, but also as role models for young women and girls[6].

With Nepal’s great progress in terms of women’s formal representation as elected representatives thus comes a momentous opportunity to advance women’s political empowerment and leadership, as well as gender equality, women’s empowerment and inclusive governance. There should be no going back. Now that the rest of the world looks at Nepal as an example, let us not fall back and lose that advantage.

The UN Women global evaluation on women’s political participation and leadership highlighted that political empowerment may not be sustained unless there are real shifts around social norms in women entering and staying in politics. There is a need to redirect energies to develop more concerted efforts in targeting the context specific attitudes, stereotypes, and perceptions held by men, women, boys and girls of women in politics.

My first recommendation therefore is the need for fostering an enabling environment for norm change, for sharing of power, in some cases this entails giving up power and privilege (which is never easy) to ensure shared/collective leadership. Political parties need to be at the forefront and must invest in supporting social norm change if we want to ensure women continue to stay in politics and participate in elections with equal footing. Persisting stereotypes in families, communities and media that want to keep women in traditional roles must be challenged including the stereotype around capacity. Men were not born with leadership capacity, they learnt, as they were mentored and supported. So, we have seen with women, once they have been provided an opportunity, an enabling environment, some training, a network of support they deliver transformative change.

Secondly, harassment and violence against women is another deterrent that prevents women from staying in politics, this has been highlighted by other panelists too. According to a global survey conducted last year, almost half of women in politics have faced serious abuse, including threats of murder, rape and assault. Most women reported psychological rather than physical abuse: a daily ritual of sexism and misogyny, sometimes from family members as well as from the community and political colleagues[7]. We have all been following the global #metoomovement and in Nepal have been witnessing the slow progress in the rape and murder of a 13-year-old in Kanchanpur. It is deeply disturbing. Political parties must develop clear codes of conduct and take action to discipline members who are involved in acts of violence, whether against candidates and officials from other political parties or against their own. Parliaments and other legislative bodies must also develop and enforce clear codes of conduct for elected members and senior staff and must address not only physical and sexualised misconduct but also bullying behaviours[8].

Within a year of completing the elections, elected women representatives have voiced their concerns about backlash related to their new roles as political leaders. The risk and occurrence of violence against women in politics is strongly documented worldwide. All stakeholders in Nepal – including the Government, political parties, development partners, civil society, and community leaders – must clearly state that violence against women, in any part of society, is NOT acceptable and does not form a part of a progressive and prosperous Nepal.

We all know that political parties are the gatekeepers of women’s political participation and representation. They are responsible for candidate recruitment and selection and decide on the issues that are placed on the policy agenda. Many female leaders of governments have honed their leadership skills in a political party. Women’s chances of political success are therefore highly dependent on if and how political parties encourage and support women within their ranks[9]. My third recommendation is related to political party reform to ensure internal democratization to further improve women’s chances of competing and staying in public office in decision making positions[10]. For change to take place, political parties must act on what is evident: that advancing women is a winning proposition for all.

Ladies and gentlemen, investing in women is both the right thing and smart thing to do. UN Women is committed to working together with government institutions and civil society organizations to advance gender equality and ensure substantive equality between women and men in all decision-making spheres.