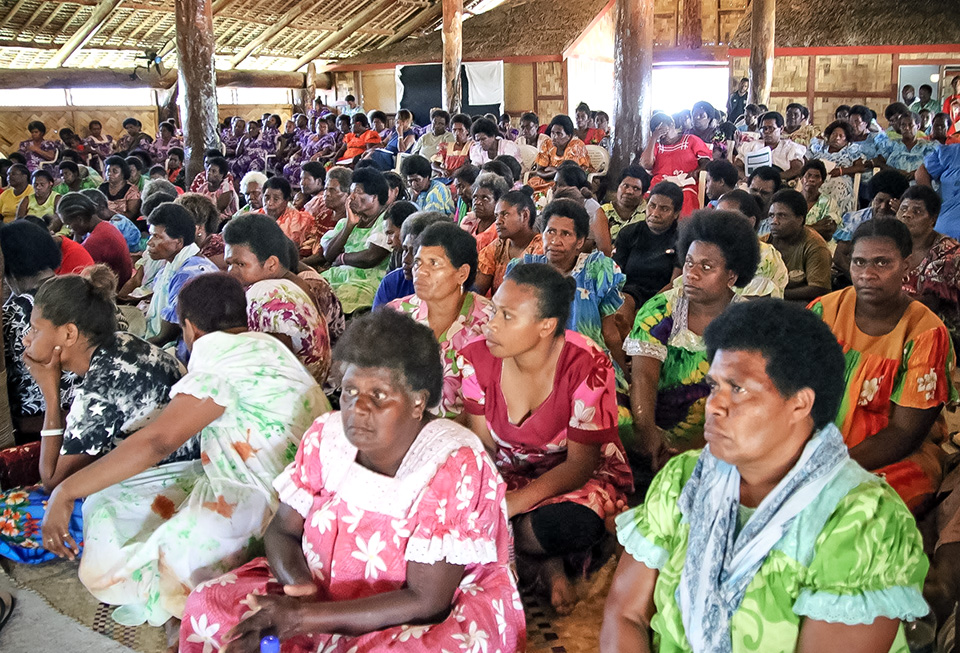 The Chiefs Nakamal, well known for its significant role in maintaining kastom in Vanuatu and used by Chiefs for governance meetings, decision-making, ceremonies and teaching, provided a space for the women market vendors to hold their discussions relating to the association’s welfare. The venue was offered by the Malvatumauri Council of Chiefs in recognition of the women market vendors leadership, their important role and contribution in Vanuatu societies.

Silae Vanua MVA was created three years ago with a goal to unite market vendors of Port Vila market and provide an avenue to collectively advocate for their rights through leadership and participation. A first for market vendors in Vanuatu’s history. 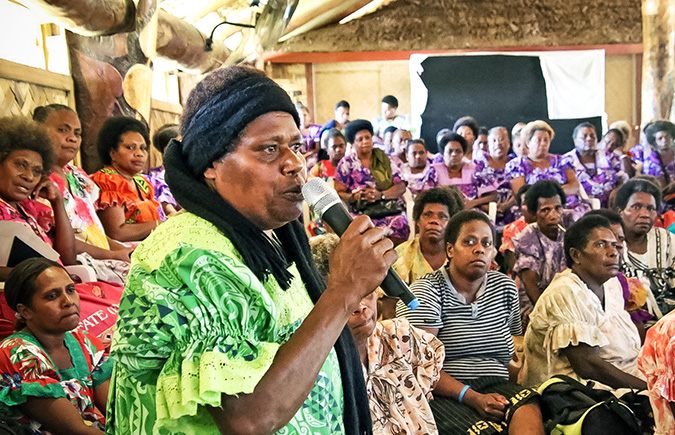 Through sheer experience coupled with training and mentoring support in leadership and governance provided by the UN Women’s Markets for Change (M4C) project, there has been a visible increase in confidence and strengthened capacity of rural women market vendors and former executives witnessed by members. This enabled former executives President Eslin Solomon, Vice-President Leisavi Joel, Treasurer Beth Matai and Vice-Treasure Winnie Douglas to better lead and manage the association’s administration and represent the voices of market vendors.

Through this AGM, the association welcomed a group of nine new executives in a complete change of leadership. The new Executive Committee is President Rachel Metak, Vice- President Josephine Fred, Secretary Jeannette Wallace, Vice-Secretary Rinnie Morrison, Treasurer Mercy Esron and Vice-Treasurer Madlyne Taripoa were all voted in as the new leadership who will continue the association’s work for the next 2 years.

“The work of an executive is not easy. We faced rough seas and many challenges. Our work was voluntary, but we pressed on because we believe that together we can help build our market vendors and achieve the changes we want,” said former Vice-President Leisavi Joel during the association’s report presentation.

More than 300 members present during the AGM acknowledged the inspiring growth and change observed in the lives of the rural women leaders. Executives had moved beyond seeing themselves as only market vendors and taken on the responsibility of executing administration roles required in running the association, such as writing financial records, reports and using a computer which went beyond what their education levels, having left school at an early age.

“I would like to commend you. What you have presented is huge and has shown that you have grown tremendously in skills during your term,” said Rinnie Morrison of Emua village when complimenting the former executives for their report presentation and acknowledging their hard work.

The AGM also acknowledged that achieving desired changes in the market environment requires cooperation between market vendors and executives and the need to continuously advocate for a better working market environment.

“Thank you everyone for your votes. With your support I believe we can make it through the next 2 years,” said new President of Silae Vanua MVA Rachel Metak of Epau village during the handover to the new executives at the AGM.

UN Women Markets for Change Vanuatu Project Manager, Christina Bare-Karae congratulated the new executives and thanked the outgoing executives for their hard work. “One thing I noticed in the outgoing executives is the cooperation amongst them and commitment to carry out the work of the association and would like to encourage the same in the new executives. Cooperation and unity is important, and the Markets for Change project will continue to provide support to the association.”

“We would like to acknowledge our members for their support and cooperation during our term as executives. These were key to our association’s sustainability and kept us going since we started. We are grateful to UN Women’s M4C project for the financial and technical support provided towards the association’s development and second AGM. Our special thank you also goes to the Malvatumauri Council of Chiefs for allowing us to use the Chiefs Nakamal. You have made this event successful and we are truly grateful for your support,” said Eslin Solomon, former President of Silae Vanua MVA.

UN Women’s M4C project is a multi-country initiative that aims to ensure marketplaces in rural and urban areas of Fiji, Solomon Islands and Vanuatu are safe, inclusive and non-discriminatory, promoting gender equality and women’s empowerment. A UN Women project, M4C is principally funded by the Australian Government, and since 2018 the project partnership has expanded to include funding support from the Government of Canada. UNDP is a project partner.

UN Women’s Markets for Change project: UN Women’s Markets for Change (M4C) project is a key component of its Women’s Economic Empowerment programme. M4C is a six-year, multi-country initiative that aims to ensure marketplaces in rural and urban areas of Fiji, Solomon Islands and Vanuatu are safe, inclusive and non-discriminatory, promoting gender equality and women’s empowerment. A UN Women project, M4C is principally funded by the Australian Government, and since 2018 the project partnership has expanded to include funding support from the Government of Canada. UNDP is a project partner.