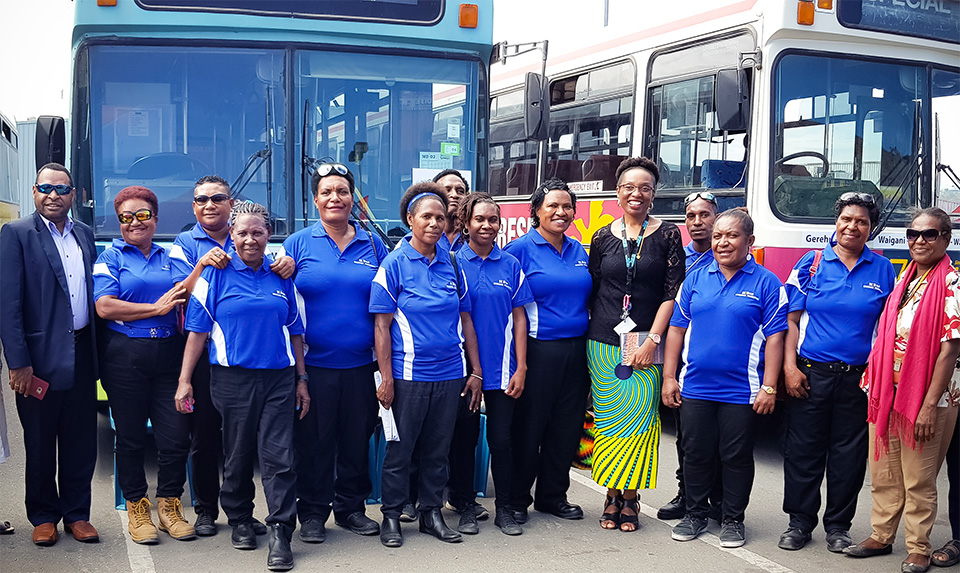 Officials of the Road Traffic Authority and UN Women pose with drivers and staff members of the women-only buses, at the 11 July launch ceremony. Photo: UN Women/Mariyam

Four such buses had been running in the city under an initiative by Ginigoada Foundation, a non-governmental organization. Four more buses were added to the fleet on 11 July. The buses, which have all-women drivers and crew members and charge nominal fares, are licensed by the Road Traffic Authority to run regular routes as public motor vehicles.

At a ceremony launching the additional buses, Adekemi Ndieli, Deputy Country Representative of UN Women, said: “Unlike men, women are less likely to travel longer routes. They undertake smaller journeys and make more stops. Safety is their major consideration. I hope that this women-only bus is a temporary measure till we bring the behavioural change in the society where women can access public transportation in safety and dignity.”

In a UN Women study done in 2015, 90 per cent of women surveyed in Port Moresby said they had experienced sexual harassment on a bus or at a bus stop.

While they are considered a temporary measure against sexual harassment and other forms of violence on public transport, the women-only buses serve an average of 450 people each day, and provide a safe space for women to build networks and discuss livelihood opportunities and topics such as violence against women.

Related News
24/05/2022
A vendor rebuilds her livelihood after COVID 19 lockdowns
24/05/2022
Women seeking refuge from violence at UN Women supported safe houses
03/12/2021
Take five: “Don’t focus on yourself as the leader, but look at others and improve their lives.”
03/12/2021
UN Women helps market vendors in Papua New Guinea rebound from the pandemic
23/11/2021
From where I stand: “Men can positively change.”
END_OF_DOCUMENT_TOKEN_TO_BE_REPLACED