Manila, Philippines — Hundreds of women’s rights supporters bicycled around Manila’s historic walled area and bathed a government building in orange light as they joined in the global 16 Days of Activism against Gender-based Violence. 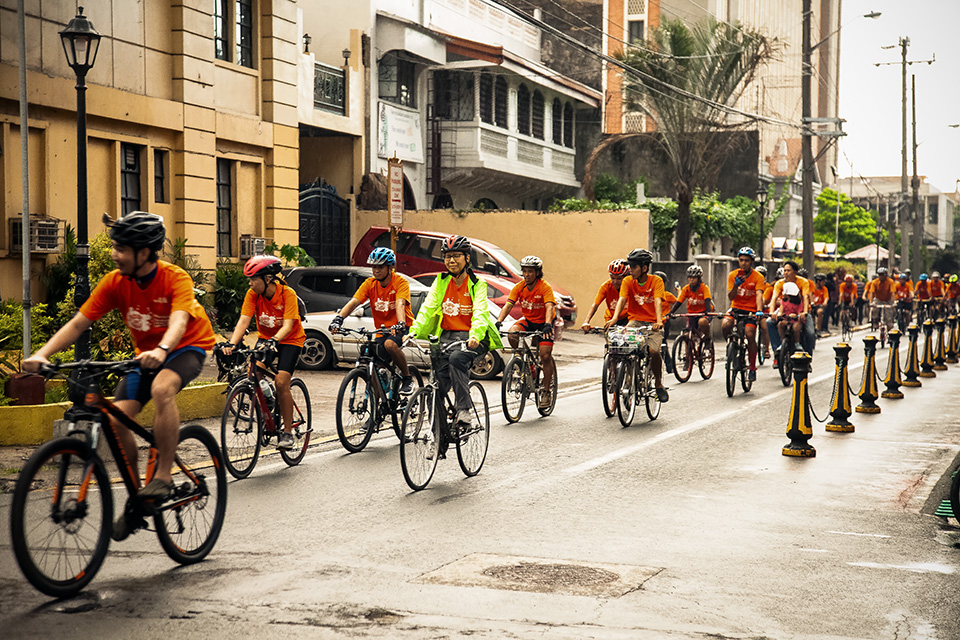 Cyclists go around Intramuros in Manila as they rally on 24 November to support women’s rights. Photo: UN Women/Norman Gorecho

This year’s campaign, which ran from 25 November to 10 December, centred on the theme Orange the World: #HearMeToo, a call to listen to and amplify the voices of women who have survived violence and seek justice.

On 24 November, the eve of the International Day for the Elimination of Violence against Women, about 200 people in orange jerseys–including young men and boys–bicycled around the Intramuros walled area. Some had cycled all the way from Cavite province, 50 kilometers from Manila. UN Women and the Embassy of the Kingdom of Belgium organized the event in collaboration with Intramuros Administration and Bambike, a bicycle maker and social enterprise.

“Like many women who use public transport, for women cyclists, street harassment threatens their safety and limits their mobility,” said Carla Silbert, Programme Specialist and Officer-in-Charge of UN Women Philippines. 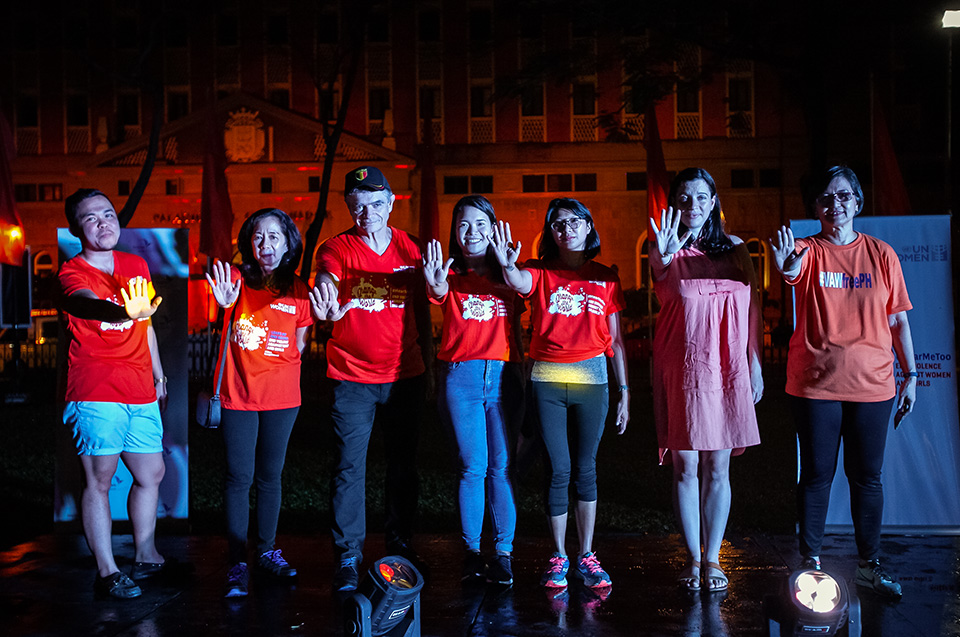 From left, representatives from the Office of Congressman Tom Villarin, Intramuros Administration, Embassy of the Kingdom of Belgium, UN Women and Philippine Commission on Women pose with the sign “Stop violence against women!” They gathered on 24 November at Plaza Roma, Intramuros, after the building was lit in orange. Photo: UN Women/Norman Gorecho

"One out of four Philippine women aged 15-45 has experienced physical, sexual and emotional violence committed by her husband or intimate partner," said Emmeline Verzosa, Executive Director of Philippine Commission on Women. She encouraged these women to speak up and seek government services. 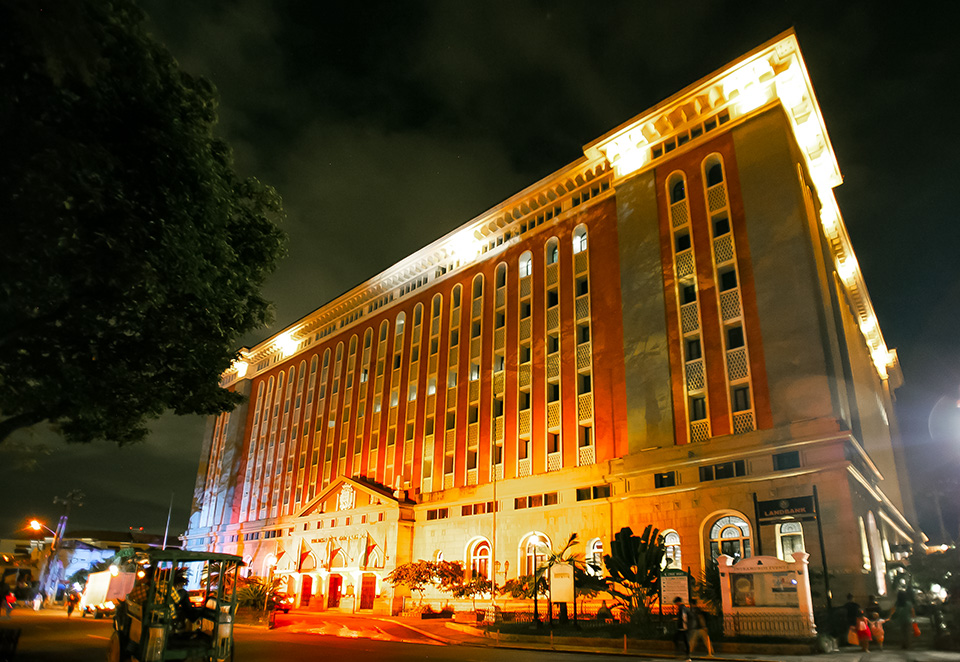 "The Palacio del Gobernador is lit in orange on 24 November, joining landmarks around the world that held similar ceremonies to amplify the call #HearMeToo. Photo: UN Women/Norman Gorecho

The bike rally was followed by a ceremony in which people used spotlights to light in orange the Palacio Del Gobernador, or Palace of Governors, a government building inside Intramuros. Diplomats, policymakers, celebrities, human rights defenders, activists and survivors took part in the event organized by UN Women’s Safe Cities Metro Manila Programme.

On 28 November, UN Women and Philippine Normal University organized a forum at the university on sexual violence in Metro Manila and on recent legislation against sexual harassment. Senate Bill No. 1326, Manila City Ordinance No. 7857 and House Bill No. 8244 penalize sexual harassment in public spaces including workplaces, schools and training institutions. 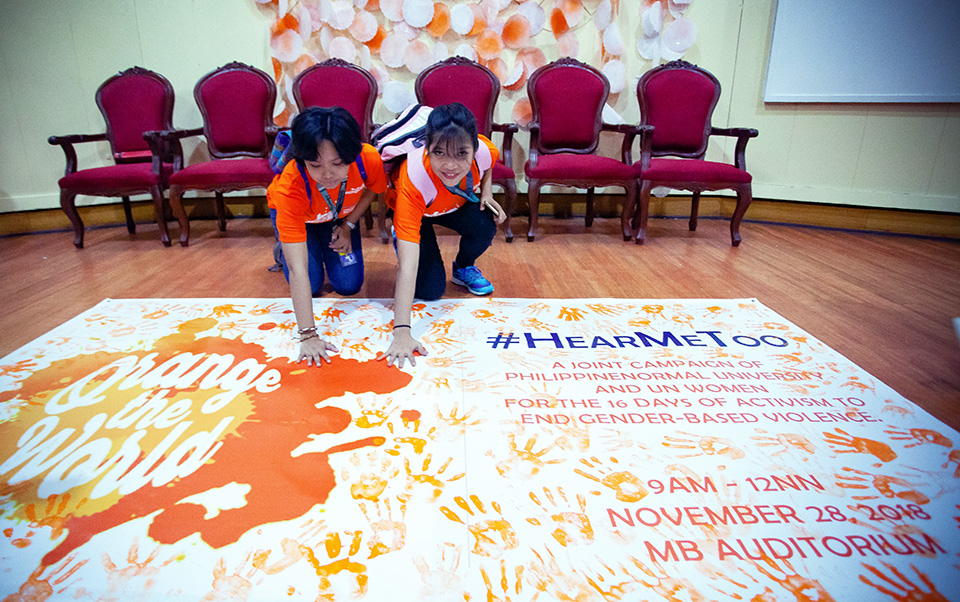 Students print their palms in orange at a 28 November ceremony at Philippine Normal University to express their commitment to speak out against sexual harassment. Photo: UN Women/Norman Gorecho

The forum was particularly aimed at increasing awareness of the Manila ordinance, known as Anti-Catcalling Ordinance. It prohibits all forms of sexual harassment in public spaces like catcalling, wolf-whistling, cursing and stalking. Perpetrators face jail terms, and fines and must attend gender sensitivity training.

Minjeong Ham of UN Women, Atty. Bianca Saldaña of Philippine Commission on Women, Cherry Barnuevo of Damayan ng Maralitang Pilipinong Api Inc., Sigrid Sibug of Institute of Politics and Governance, and other speakers explained how those who harass women can be held accountable under the Manila ordinance. 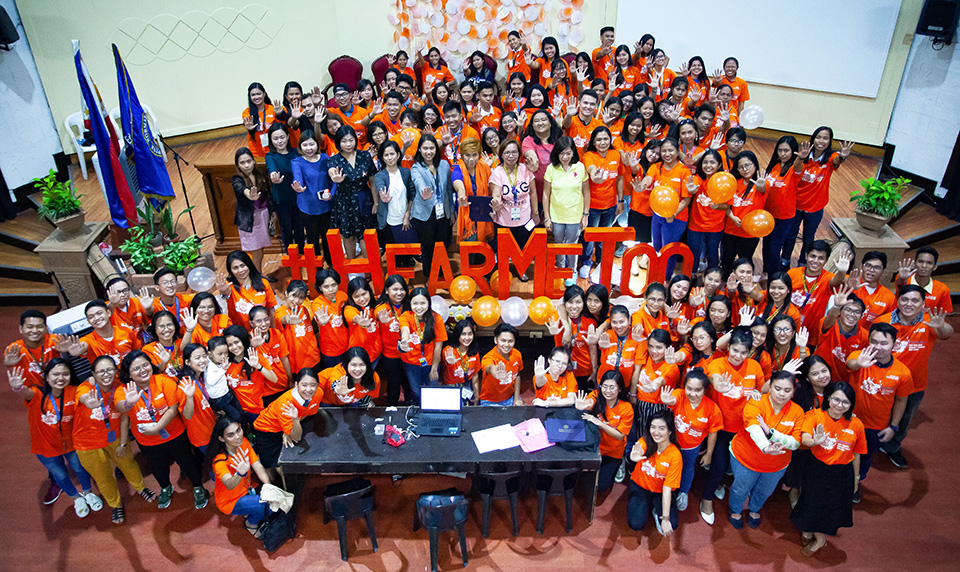 Students at the 28 November forum at Philippine Normal University make a mass call for #HearMeToo--a call to listen to and believe survivors and end the culture of blaming the victim. Photo: UN Women/Norman Gorecho

Students from 12 universities in Manila joined in discussions on how sexual harassment should be considered as a form of gender-based violence and how they can help end such violence.

About 300 of the students printed their palms in orange to express their willingness to listen to and believe survivors when they reach out for help.

Related News
08/04/2022
Women groups relieve conflicts in fragile communities in the Philippines
22/12/2021
In the words of Police Lieutenant Colonel Melbeth Mondaya: “Protection and education for girls is especially important because they are the key to women’s empowerment.”
22/12/2021
In the words of Nurrunihar Mohammad: "Women's leadership … is beginning to be recognized"
13/07/2021
I am Generation Equality: Louise Mabulo, Philippine chef, farmer and activist
18/03/2021
I am Generation Equality: Lauralyn, Filipino advocate for preventing violence against women and girls
END_OF_DOCUMENT_TOKEN_TO_BE_REPLACED