President of Parliament committed to people living with disabilities

Dili, Timor-Leste — People living with disabilities have received a pledge for more inclusion from the President of Timor-Leste’s Parliament. 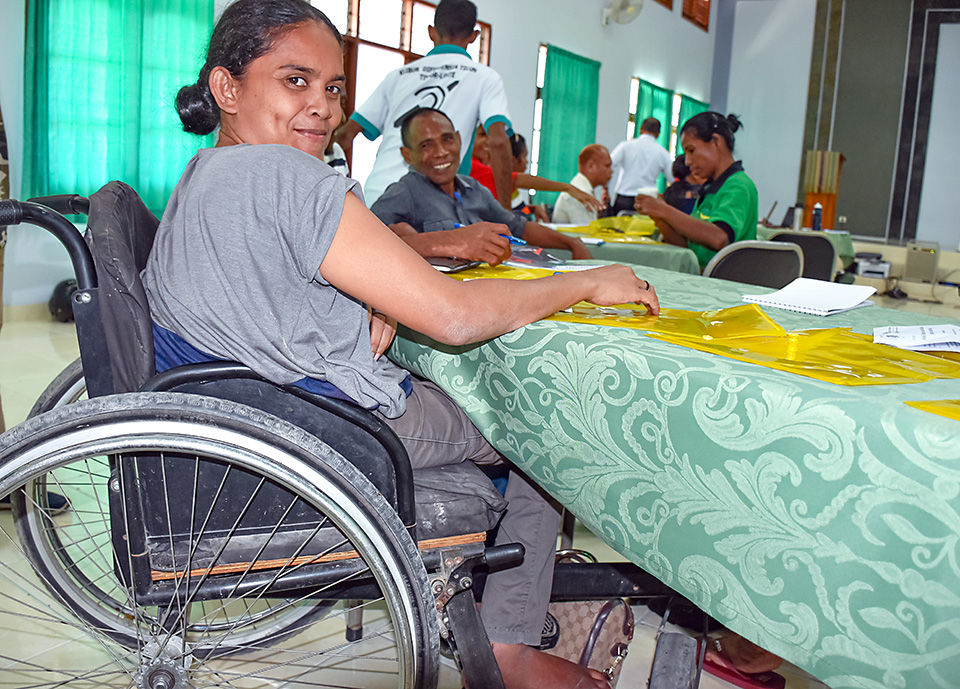 In a seminar held last week, 13 June, a significant step forward was taken to protect and promote the rights of people living with disabilities. Parliamentarians, Government Members and partners came together to discuss how to better include disability in the 2020 State Budget.

President of the Parliament, His Excellency Arão Noé Amaral, re-affirmed in his opening remarks, Parliament’s commitment to the rights of people living with disabilities and pledged to study the possibility of developing a parliamentary resolution to adopt on the rights of people with disabilities. He also said he would invite the Government to submit a proposal for ratification of ''The Convention on the Rights of Persons with Disabilities.''

“Government has the obligation to protect persons with disabilities and not to exclude them from development programming and planning,” Amaral said.

“The voice of persons with disabilities will be stronger if we have the support of a wide range of people, especially from those at the highest levels of the State,” de Silva said.

Several key Government Members and officials and Members of Parliament presented progress to better include persons with disabilities.

Her Excellency Signi Chandrawati Verdial, Vice-Minister of Social Solidarity and Inclusion said her Ministry is establishing a new National Directorate on Disability.

Anjet Lanting, on behalf of the United Nations team in Timor-Leste, spoke about how to include disability in legislation, policy and planning. Lanting commended Timor-Leste for recognizing inclusion as the key for sustainable development in the future. ''Including disability is the right and just thing to do,'' she said.

Lanting presented data which showed how including people with disabilities has economic benefits for the country. ''Everyone can acquire a disability in their lives, so it is in everyone’s interest to work toward better inclusion, with additional responsibilities for those in position of authority to make this a reality,'' she said.

A representative from Oxfam, one of the co-organizers of the seminar, Fernando da Costa, acknowledged the progress that has been made by the government to date, but also urged for more work to be done.

He said, “These days we have seen a number of potential persons with disabilities and we must create an inclusive budget to invest in their capacity and have them also contribute to sustainable development.”

At the end of the seminar, many participants signed a declaration for the ''Protection and Promotion of Persons living with a Disability,'' for submission to Parliament.

The seminar was organized by Committee F and the Women’s Parliamentary Caucus (GMPTL), jointly with the ADTL and made possible with the support from the United Nations Partnership for the Rights of Persons with Disabilities and Oxfam Timor-Leste.

To learn more about disability and the work of the United Nations on disability rights in Timor-Leste:

Related News
30/10/2018
UN Agencies partner with organizations of persons with disabilities to promote more inclusive services and the rights of persons with disabilities
06/04/2017
From transforming within to transforming society: UN Women launches training on leadership for gender equality in Timor-Leste
29/09/2015
Recognizing Women’s role in Rural development and Food Security
20/07/2022
A champion for women and girls with disabilities
14/12/2021
In a Myanmar village, a man will try to change men’s culture
END_OF_DOCUMENT_TOKEN_TO_BE_REPLACED