Speakers raised awareness about how empowering women in the workplace boosts bottom lines; how the Women’s Empowerment Principles —a set of guidelines on how to empower women in the workplace, marketplace and community- can support that cause; and how companies can increase investments in gender-inclusive environments.

“I am pleased to introduce WeEmpowerAsia, an EU-UN Women joint programme, funded by the EU, which aims at promoting gender equality and women’s economic empowerment in the region. The European Union will continue its work in Asia and at home to ensure that women are empowered, have equal access to education, financing and jobs," said Giuseppe Busini, acting Charge d'Affaires at the EU Delegation to Thailand.

Jatfors said, "We are thrilled to see so many powerful, dedicated and passionate leaders from ASEAN and the European Union coming together, all committed to create a more inclusive economy where women’s economic empowerment is realized as a human right and seen as a smart investment leading to both social development and economic growth.”

During the ASEAN Women CEOs Summit, industry leaders, CEOs and policy executives discussed the challenges that globalization poses for women in business within and outside ASEAN. They proposed steps governments and businesses should take to transform these challenges into opportunities for women.

"As a company, we need to step in to address social and structural barriers that are holding back women's participation & leadership in the economy"
- Ernest Hutagalung, @telkomtelstra 🇲🇨 #WEEmpowerAsia at #WomenCEOsSummit pic.twitter.com/6YCXMk8sXN

"With the right mindset and will, there are plenty of opportunities to advance women's economic empowerment & entrepreneurship in #Asia"
- @_NadiraYusoff, @KiddoCareMy 🇲🇾 #WEEmpowerAsia panel at #WomenCEOsSummit pic.twitter.com/8a85O77gl9

"We're committed to reach gender equity 50:50 in our company, including by increasing the number of women in management positions"
- @yosayut Sahawatcharin, @Unilever #Thailand 🇹🇭 at #WEEmpowerAsia panel #WomenCEOsSummit pic.twitter.com/cap6iACQlD 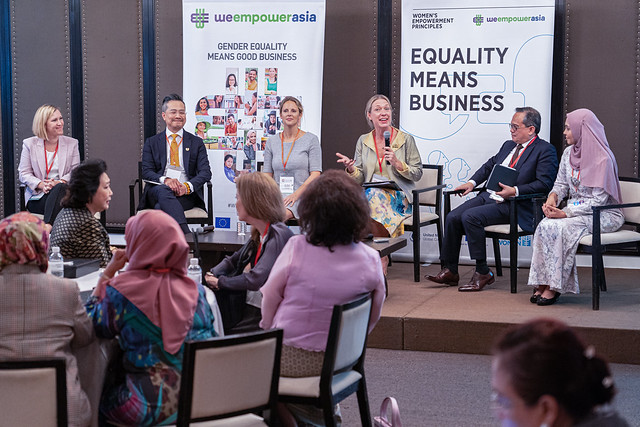