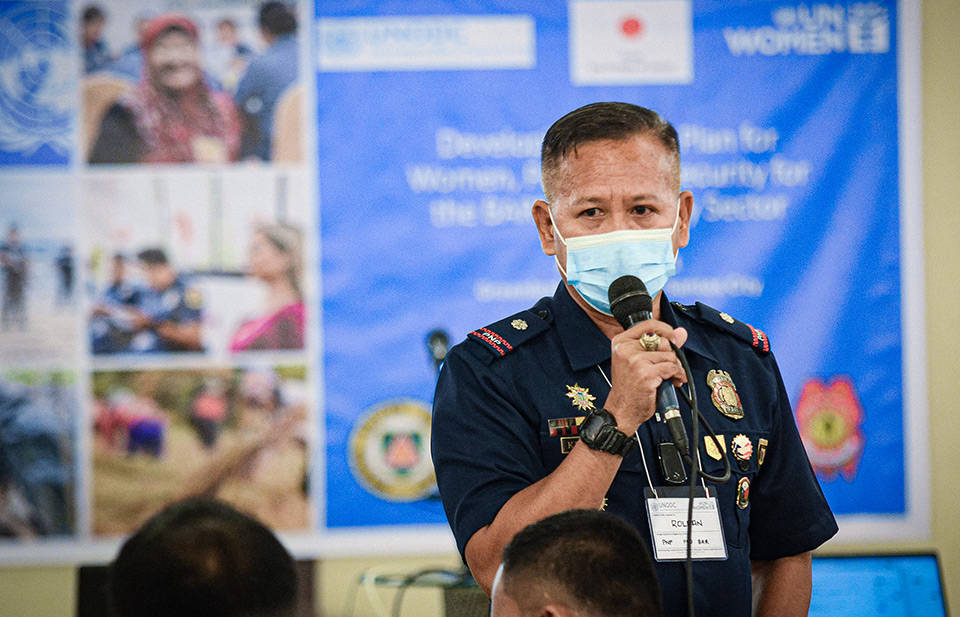 The event was held 6-8 April 2021 in General Santos City, located on the island of Mindanao in southern Philippines, to develop shared local measures to advance the Regional Action Plan on Women, Peace and Security launched in November by the Bangsamoro Women Commission, who organized the workshop jointly with UN Women.

The women of Mindanao have suffered disproportionality from the civil conflict that ran in the majority-Muslim region from the 1970s until the Bangsamoro Autonomous Region in Muslim Mindanao (BARMM) was formed in early 2019. Women and girls need targeted support in facing the aftermath of the conflict, as well as ongoing threats to their rights and safety. But they also have proven to play a particularly effective role in healing the region and building lasting peace.

The security-sector actors identified key challenges in this regard, including ongoing security issues associated both with rido (clans or family feuds), political armed groups and violent extremism, noting that violent extremist organisations were operating in the region. Critical issues further impacting women and girls were also discussed, namely trafficking in women and girls, and child, early and forced marriage.

The Regional Action Plan of the Bangsamoro Women Commission prioritizes women’s participation in building peace, notably in policy and decision-making, as well as the protection of women and their communities from violence, among other things. The Commission is leading a series of consultative planning processes involving several stakeholders in the BARMM to clinch commitments on the agenda of women, peace and security. The localization process is being supported by the United Nations Peacebuilding Fund, jointly implemented by UN WOMEN, IOM and UNFPA.

The local action plans developed in the workshop are based on lessons learned and good practices from previous provincial localization efforts in Maguindanao, Lanao del Sur, Basilan, Sulu and Tawi-Tawi. 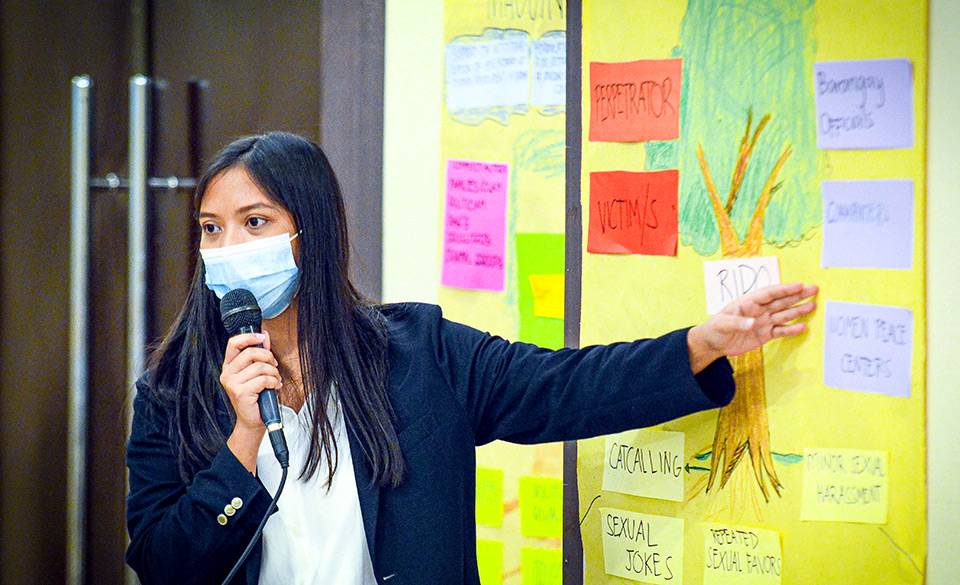 “I hope [the outcomes] will strengthen the [local] action plans to address the violent extremism-related crime surge, to build community resilience amid armed conflict, and to implement strategic activities to achieve women, peace and security goals,” said Helen Rojas, chief of staff to the chair of the Bangsamoro Women Commission.

The plans call for the recruitment of more women cadets, the Barangay Peacekeeping Action Team, and the Bangsamoro Islamic Women’s Brigade. They also call for more women in leadership positions, notably in police community relations and investigation teams; and for more women from diverse backgrounds to be deployed in community patrols.

The Philippines has committed to several relevant international legal frameworks. These include the Women, Peace and Security agenda initiated in 2000 by the UN Security Council resolution 1325, the Convention on the Elimination of All Forms of Discrimination Against Women (CEDAW) adopted by the United Nations in 1979, and the CEDAW General Recommendation 30. The country transposed CEDAW at the national level in 2009 with its own Republic Act 9710, more widely known as Magna Carta of Women.

At the workshop’s close, Gaelle Demolis, acting officer in charge of UN Women for the Philippines, said she was “inspired and humbled by the security sector women and men and their commitment to the WPS agenda.” “Every day they provide locally relevant and concrete solutions to build a peaceful and just BARMM,” she said.

Related News
05/07/2022
In the words of Aileen U. Hualde
27/04/2022
In the words of Sittie Janine M. Gamao: “To overcome my own fears, I think of myself not as babae lang (just a woman) or bata pa (too young) but as a peace officer doing her work.”
08/04/2022
Women groups relieve conflicts in fragile communities in the Philippines
30/03/2022
fwis Kert Tandog
23/03/2022
UN Women supporting female former combatants in the Philippines as agents of peace
END_OF_DOCUMENT_TOKEN_TO_BE_REPLACED