Jakarta, Indonesia — Top twenty artworks from 540 gender equality themed comic and cartoons exhibited in The Warehouse, Plaza Indonesia Shopping Mall, from 25 November to 10 December 2016 in commemoration of 16 Days of Activism against Gender Based Violence. This exhibition is a continuation from the competition that was held by UN Women Indonesia and Delegation of the European Union (EU) and Embassies of EU Member States.

Comics and cartoons that was exhibited were participants’ ideas of prevailing situation of gender equality, women’s rights, and women empowerment. Artworks that were submitted illustrated many problems revolving gender equalities in Indonesia, such as, gender based discrimination in workplace, in education sector, women’s leadership, gender stereotype and social norms that limits the mobility of women and girls in participating in development.

“Even without words, comics and cartoons are able to potray reality in a manner that is honest, eye opening, thought provoking and reflective, yet entertaining and easy to understand at the same time. We would like to extend our gratitude to all participants who have sent their works. Observing all the entries, we saw variaty of comics and cartoons which illustrates the challenge and hope in achieving gender equality,” said Lily Puspasari, representative of UN Women Indonesia. “Despite progress and efforts to push commitments, many women and girls that have not achieved their full rights and endured violence in domestic and public spaces. We hope that this comics and cartoons exhibition will attract public’s eyes to understand the problems that are faced by women and girls in Indonesia and to inspire everyone play an active role in overcome the challeges that pushed women and girls to reach their full potential, creating an equal and discrimination free world.”

According to EU Ambassador to Indonesia, Vincent Guérend, the European Union is committed to implementing the UN 2030 Agenda for Sustainable Development and its 17 Sustainable development goals. "Women Empowerment is a powerful leverage for development. Therefore, the EU continues its work to promote gender equality and women empowerment worldwide and also in Indonesia. One such effort is by collaborating with UN Women in the Planet 50-50 campaign on gender equality," said Ambassador Guérend.

EU Ambassador and the EU Head of Mission or their representatives in Indonesia pledge for HeForShe to show their commitment in the achievement of gender equality. Photo: UN Women/Aloke Pictures

In conjunction with the opening of the exhibition and to show EU's commitment towards the 2030 Agenda and SDG5 on gender equality, the EU Ambassador and the Ambassadors of EU Member States took part in a HeForShe pledge. The HeForShe pledge is aimed among others at accelerating women's economic empowerment, supporting women's role in peace and security, enhancing the participation and leadership of women in politics, and eliminating violence against women.

"Men need to stand up for gender equality and talk about it. Gender equality is not just a women's issue. It's everybody's issue." said Ambassador  Guérend. "This is why the EU Heads of Mission in Jakarta are so happy and committed to join the United Nations HeForShe campaign here," he added.

Planet 50-50 Comic and Cartoon Competition was launched by UN Women together with the Delegation of European Union in August 2016. Publics, Indonesian nationals which reside in Indonesia and be 18 years old and over, were invited to join the competition by illustrating the prevailing situations on gender equality, women’s rights and women’s empowerment and the changes she or he woule like to see. Until the deadline, 540 artworks were received from 351 participants.

Besides the exhibition, there were series of events held coincide with 16 Days of Activism against Gender Based Violence, such as talk shows, workshops, and movie screenings held at the same place and open for publics. 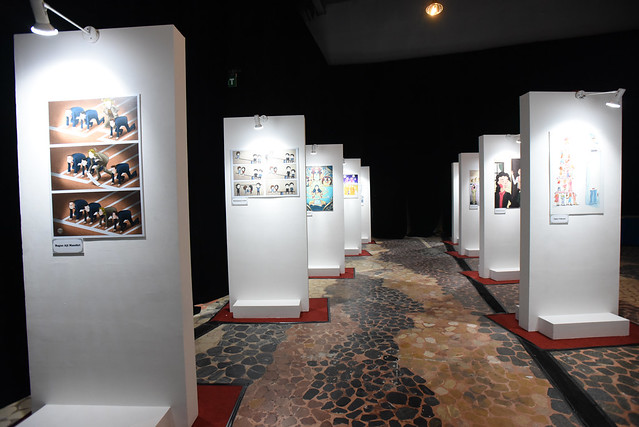