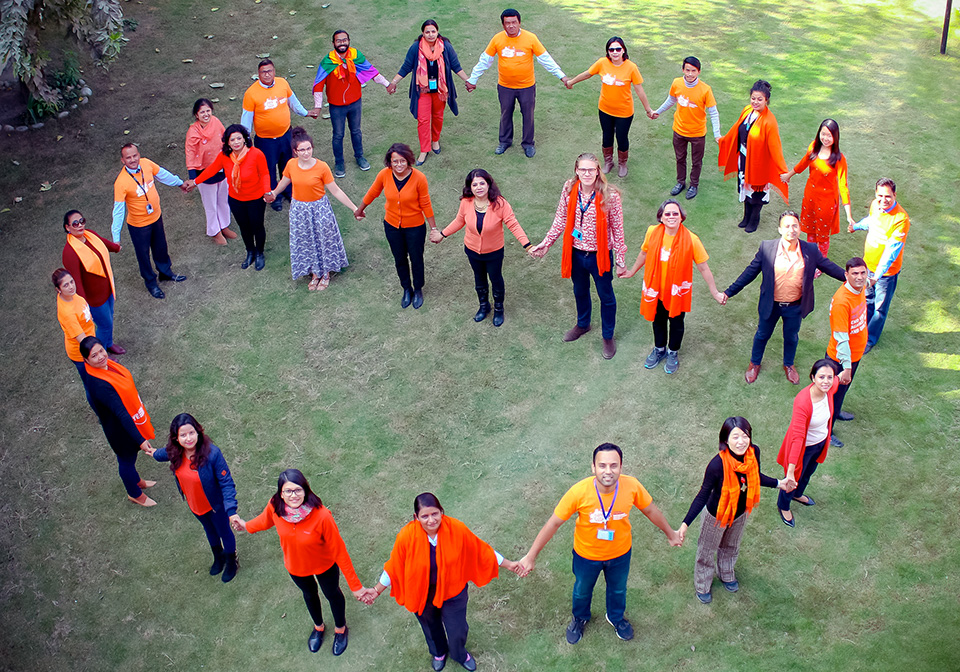 The Government of Nepal has adopted important normative frameworks for women’s human rights, including the Convention on the Elimination of All Forms of Discrimination Against Women (CEDAW), Beijing Declaration and Platform for Action, 2030 Agenda and its Sustainable Development Goals, and UN Security Council Resolutions 1325 and 1820. These commitments are enshrined in the Constitution of Nepal and efforts are being taken to ensure that all laws and policies conform with the constitutional provisions on gender equality.

Nevertheless, women and girls in Nepal still face multiple challenges. Although more than 14,000 women were elected during the local, federal and provincial elections, women still struggle to exercise their rights to political participation and leadership. This is largely due to social norms and harmful practices that directly limit women’s voice and agency, women’s limited access to information, resource constraints and inadequate support systems. Only two per cent of women have been elected as mayors or chairpersons of local governments, whereas 91 per cent of deputy positions are held by women.

Gender inequality remains high, as indicated by the Gender Inequality Index of 0.48 in 2017. Many women face multiple forms of discrimination in addition to gender, which could be based on class, caste, geography, language, religion, and sexual orientation. Young women, in particular, are underrepresented in the work force. Women’s mobility, especially during the formative adolescence and youth years, is restricted.

Women are most at risk of physical, sexual and emotional violence, and one in four women in Nepal are victims. Nepal ranks very high in terms of women’s labour force participation, but not in other aspects of economic equality. More men than women occupy managerial positions and are considered ‘professionals’ within their sector. Only 17 per cent of private firms include women in top management positions. Wage inequality between sexes for equal work remains high, and women’s contributions to unpaid domestic/care work is yet to be recognised and valued in the national economy.

The UN Women Nepal Country Office was established in April 2012, and started functioning with full-fledged authority in July 2013. Grounded in the vision of equality enshrined in the UN Charter, UN Women in Nepal, among other issues, works for the: (a) elimination of discrimination and violence against women and girls; (b) empowerment of women; (c) achievement of equality between women and men as partners and beneficiaries of development; and (d) human rights, humanitarian action and peace and security.

UN Women Nepal seeks to advance women’s economic empowerment by promoting increased income security, better jobs and economic independence of vulnerable women. This is being pursued by fostering an enabling environment to address discriminatory social and economic norms and structural barriers, ensure gender-responsiveness in the development and implementation of macroeconomic and sectoral policies, and advance substantive equality approaches in select target sectors, including agriculture and energy.

UN Women Nepal fosters a coordinated and coherent approach to gender equality and women’s empowerment amongst development partners by co-chairing with USAID and the Embassy of Finland the International Development Partners’ Group - Gender and Social Inclusion (IDP-GESI) Working Group. UN Women also leads and fosters coordination of the UN system’s work on gender equality. UN Women co-chairs the Gender Theme Group (GTG) with UNDP, which aims to ensure that the GTG and the wider United Nations Country Team (UNCT) carries out coordinated and effective action on gender equality and women's empowerment with the principle of ‘leaving no one behind’. UN Women also co-chairs with UNDP the working group of UNDAF Outcome Area 4 on Governance, Rule of Law and Human Rights as well as the UNCT Harmful Practices Working Group with UNFPA. Furthermore, UN Women has established Civil Society Advisory Group (CSAG) as a dynamic source of innovative initiatives, ideas and policy perspectives to assist in achieving its strategic goals.

Nepal has set itself the goal to graduate from least developed country status by 2022. Cited as one of the ‘fastest movers’ by the Human Development Report, the country has made significant progress towards achieving its development goals. The focus on broad-based economic growth and poverty alleviation has produced encouraging results, with the percentage of the population living below the poverty line falling from 42 in 1996 to 25.4 in 2011. Despite the difficult post-conflict transitional context, the country is expected to achieve six out of its eight Millennium Development Goals by 2015, and is likely to achieve targets for poverty and hunger, universal primary education, child mortality, maternal health and gender equality and women’s empowerment.

Women’s representation in the Constituent Assembly dramatically increased to 29% in the November 2013 elections from 2.9% in 1991 (in the then parliament). Additionally, Nepal has demonstrated active leadership in development issues globally, playing a formative role in the development and adoption of the Istanbul Programme of Action in 2011.

The Country Office’s framework of support for 2014-2017 builds on lessons learned from past programming and adopts a holistic and integrated approach across UN Women’s five thematic priorities. It is guided by Nepal’s stated priorities and its commitments to relevant normative frameworks, the country’s UNDAF 2013-2017, the CEDAW Concluding Observations 2011, and UN Women’s corporate Strategic Plan 2014-2017. It promotes national ownership, capacity development and institutionalization, inclusiveness, coordination and partnerships, and knowledge generation and management, and seeks to prioritize engagement with and support to key duty bearers who are responsible for advancing women’s human rights and with rights holders so they can exercise voice and agency.

The framework supports increasing women’s leadership and participation in decision-making at all levels through incorporation of substantive equality and non-discrimination provisions in the country’s constitution. More specifically, the framework focuses on supporting gender advocates to influence the inclusion of gender- responsive provisions to the new constitution in line with international standards and CEDAW recommendations. It will provide assistance to Election Commission (EC) staff at national and local levels to implement the EC’s gender policy to support women’s increased participation in the democratic process. Programming in this area will further enhance the capacity of gender equality advocates and women’s groups to lobby for representation and leadership of women in major political parties and in public institutions.

Drawing on lessons from past work on VAW and women’s leadership and participation, the Country Office’s support to women’s economic empowerment focuses on engendering macroeconomic policies by enhancing the capacity of government officials to design and implement gender-responsive policies. Macroeconomic and social policies must be informed by feminist perspectives to strengthen women’s capacities and access to productive resources and employment. To address the evidence deficit, efforts will be made to generate data and analysis to facilitate gender-responsive policy making and programming, including through support to the gender unit of the Central Bureau of Statistics and the establishment of a network of feminist economists. Networks of excluded women will be strengthened for economic productivity and a network of rural women farmers will be established to harness and contribute to the government’s Agricultural Development Strategy. Leadership of these networks will be enhanced so they can play active roles in local and national decision making, leveraging resources for women’s economic empowerment from large national development programmes, such as the Local Governance and Community Development Programme (LGCDP).

Harnessing the agreed conclusions reached at the 57th session of the Commission on the Status of Women (CSW) 2013, efforts towards ending violence against women and girls include support to the implementation and monitoring of the government’s commitments, and through initiatives to challenge prevailing patriarchal norms, masculinities and traditional, harmful stereotypes fuelling different forms of violence. Anticipated results include implementation of the government’s CSW follow- up action plan (building on the government’s COMMIT pledge), strengthened data and evidence, costing frameworks for the implementation of EVAWG-related legislation, strengthened partnerships with media (harnessing the Right to Information Act), and a network of male leaders.

UN Women will continue its work to strengthen women’s leadership and participation in the peace and security agenda by supporting the implementation of national commitments, specifically the implementation and monitoring of the NAP on UNSCRs 1325 and 1820 at the national and local levels, and by addressing the rights and agency of conflict-affected women so they can influence local decision-making processes to demand accountability and contribute to a sustainable peace.

To underpin the efforts outlined above, the framework of support for 2014-2017 also seeks to increase accountability and monitoring of gender equality commitments and to establish and strengthen linkages between the normative and operational aspects of gender equality and women’s empowerment. Mechanisms will be put in place and institutions strengthened to increase the capacity of the government to monitor implementation of commitments (including an umbrella national policy, tools for costing plans, gender- sensitive government training institutions, and dialogue mechanisms for inter-governmental normative processes). Continued support from UN Women will be provided to ensure institutions of governance are gender-responsive – harnessing the linkages and complementarities with the country’s nationwide LGCDP – including through the establishment of gender units within the judiciary. The Country Office will also play a convening and advocacy role with and beyond the government to ensure that gender equality is high on the political agenda during the Beijing +20 review and that women’s rights, empowerment and gender equality are at the heart of the country’s post-2015 development agenda.

The Country Office provides technical assistance on gender within the UNCT, leads coordination as chair of the UN Gender Theme Group, and is leading efforts to implement the UNCT Gender Scorecard. It also continues to play a key role, currently as Chair, in the Peace Support Working Group. The programme envisages the establishment of a macro-level gender coordination body – proposed by UN Women – led by the government, co-convened by the UN Resident Coordinator and with UN Women as its Secretariat.

UN Women will continue to deepen its partnerships with government, civil society and the UN – and will further concentrate efforts on strengthening its reputation and credibility with development partners – to strengthen coordination, joint advocacy and to expand opportunities for joint programming. The UN Women Nepal Civil Society Advisory Group (CSAG) will create a consultative platform for advancing strategic dialogue and will mentor a new generation of gender equality advocates. Partnerships with the private sector will be initiated to promote the Women’s Empowerment Principles (WEPs), and with academia through a research network. Peer learning through South-South and South-North cooperation will be facilitated for national partners to share knowledge and expertise, including through opportunities for regional cooperation around issues where collective advocacy will be needed, such as migration.

Take Five: “Gender equality is everyone’s business and responsibility. When gender equality is effectively pursued, everyone wins.”
Changing Social Norms, One Step at a Time
In the words of Kamala Thapa: “Put indigenous women and our communities at the centre of climate action”
From where I stand: “Do not wait for others to hand you your rights”
Comprehensive relief package provides support to women and excluded groups during the COVID-19 pandemic in Nepal
END_OF_DOCUMENT_TOKEN_TO_BE_REPLACED
news

Take Five: “Gender equality is everyone’s business and responsibility. When gender equality is effectively pursued, everyone wins.”
Changing Social Norms, One Step at a Time
In the words of Kamala Thapa: “Put indigenous women and our communities at the centre of climate action”
From where I stand: “Do not wait for others to hand you your rights”
Comprehensive relief package provides support to women and excluded groups during the COVID-19 pandemic in Nepal
END_OF_DOCUMENT_TOKEN_TO_BE_REPLACED

UNDP, UNFPA and UN WOMEN jointly offer you a great opportunity to explore and use your creativity on a short video about “Gender Equality in Nepal”. Let's join the competition ... More