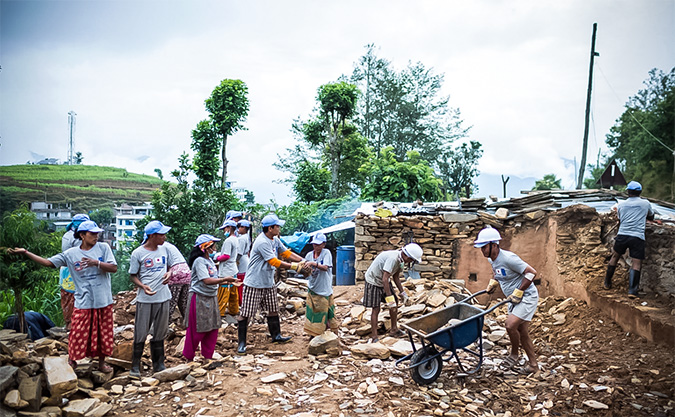 Under the Hyogo Framework for Action, only 8 percent of reporting countries in Asia reported the collection of sex-, age- and disability-disaggregated data (SADDD) in disaster vulnerability and capacity assessments. Of the 17 post-disaster needs assessments conducted in Asia between 2005 and 2015, only three reported SADDD and included a strong analysis of the gendered impacts of disasters[4]. Without this SADDD and gender analysis, the impacts of disasters on women and girls is often rendered invisible and deprioritizes their needs and capacities in humanitarian response.

In the region, UN Women is a champion for evidence-based response and making the needs and capacities of women and girls visible. This has been achieved through a series of gender profiles for disaster preparedness in order to inform effective responses when disasters strike, documenting lessons learnt and sharing good practices through webinars, events, and brochures, and providing technical support to national disaster management authorities to build evidence bases around gender in humanitarian action in their countries.

To address uneven capacity for the collection of SADDD and gender analysis across the region, UN Women proactively supports Member States and other humanitarian actors in collecting sex, age, and disability data and conducting gender analysis. After the 2014 cyclone in Tonga, UN Women supported the Tonga government’s efforts to disaggregate disaster loss data by sex and age, forming the basis for ensuring that the Humanitarian Action Plan was gender-sensitive. To highlight the effects of the complex emergencies and humanitarian displacement on women and girls, UN Women and the Provincial Disaster Management Authority of Khyber Pakhtunkhwa in Pakistan organized focus group discussions with nearly 100 displaced women, including Afghan refugees, women displaced by military operations, and women returnees.

UN Women was actively involved in the development of Nepal’s Post Disaster Needs Assessment after the earthquake, and lead the writing of the Gender Equality and Social Inclusion chapter of the assessment, widely recognized as a best practice in integrating gender into disaster response and recovery. As a result of UN Women’s advocacy and technical support, many post-disaster needs assessments conducted in the region in 2016 incorporated gender analysis, including Sri Lanka, Viet Nam, Fiji.

In May 2016, UN Women co-organized the Regional Asia-Pacific Conference on Gender and Disaster Risk Reduction in Ha Noi, Viet Nam, the first meeting in the region on the gender-responsive implementation of the Sendai Framework for Action. The Conference concluded with a set of recommendations for gender-responsive disaster risk reduction. UN Women’s advocacy also resulted in a gender action plan being adopted at the Asian Ministerial Disaster Risk Reduction Conference, and integrated into the Asia Regional Plan for the Implementation of the Sendai Framework.