Result at a Glance 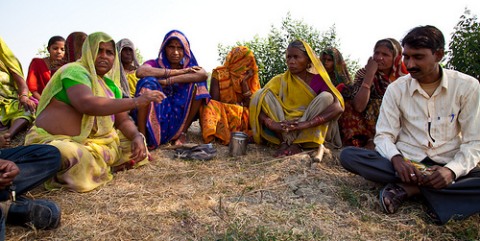 In Chitrakoot district of Uttar Pradesh, 100 women worked together in constructing a pond under the supervision of women work site supervisors. Photo credit: UN Women/Gaganjit Singh

In India, our most prominent contribution has been to ensure that women can participate actively in politics, and voice their opinions freely. Our efforts with our partners have helped shape some important political changes in the re country.

Some of the most significant achievements have been our support for the implementation of landmark agreements – such as the Beijing Declaration and Platform for Action and the Convention on the Elimination of All Forms of Discrimination against Women (CEDAW).

We work closely with governments, women’s groups and civil society to ensure that the obligations and commitments are followed-upon.

We advocate for gender equality and the empowerment of women, focusing on the promotion of women’s human rights.

Working in South Asia for the past 20 years, UN Women has helped to improve the lives of women in the region in many different ways.

Since 2006, we have supported the implementation and monitoring of the landmark Protection of Women from Domestic Violence Act, 2005. In partnership with the Lawyers Collective Women’s Rights Initiative and the Government of India, we helped to develop important materials to increase awareness such as a manual for protection officers and a handbook for the judiciary. For the first time in India, the implementation of such legislation is being monitored on an annual basis. Four Monitoring and Evaluation Reports have highlighted important achievement and gaps.

The “Bell Bajao” (Ring the Bell) campaign by The Breakthrough Trust, UN Women and the UN Trust Fund to End Violence Against Women reached out to more than 130 million people and raised awareness about domestic violence

UN Women, along with the Government of India, works to strengthen the leadership skills and confidence of women leaders in gram panchayats (village councils) so they can make decisions that benefit all. So far 315 Mahila Jagruk Manches (women’s awareness platforms) have been formed with elected women representatives from 635 Gram Panchayats in Madhya Pradesh, Odisha and Rajasthan in India. Almost 5,000 elected women representatives and over 17,000 women citizens have participated in these Manches. This has shown that collective action helps women leaders to prioritize issues and take important decisions.

In Bihar, campaigns to strengthen women’s empowerment during elections have made a difference. Women candidates received support to file nominations and manage electoral campaigns in Panchayat elections. Due to this, there was a marked increase in the number of women canvassing during elections. More women contested from general seats, and not just those reserved for them.

We have worked with the Government of India and select UN agencies to ensure that the census in this country reflects crucial data related to women. With the collection of sex disaggregated data, we make women’s work visible and enable a more accurate reflection of women’s economic contributions.

In 2001, our partnership with the Government of India and select UN agencies helped to capture data on women. There was an increase in the female work force participation and overall sex ration in intervention districts during 1991-2001. The provisional data of Census 2011, released by the Office of the Registrar General of India, shows further improvement in the growth rate of the female population in the period 2001-2011, in female literacy and in the overall sex ratio and a reduction in the child sex ratio.  These results reinforce the importance of engendering national census exercises, which present an accurate current status of women and relative gender gap in core areas such as growth, basic count, female workers, head of the household, literacy and educational levels, marital status, age structure, among others.

UN Women, UNEP and Sweden Renew Commitment to Support Women’s Resilience to Disasters and Climate Change
Treading towards a secure future by threading needles and trading produce
New deal between the Federation of Thai SMEs and UN Women to boost women-owned businesses
A breath of hope for Rohingya women in Myanmar’s Rakhine state
Sri Lanka: Rebuilding lives and livelihoods, leaving a long conflict behind
END_OF_DOCUMENT_TOKEN_TO_BE_REPLACED