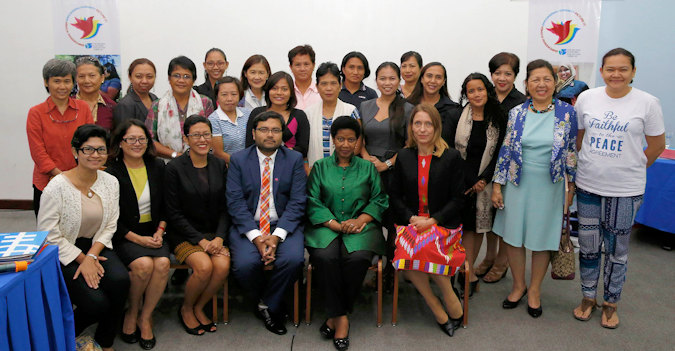 Credit: UN Women/Alamid
The Philippines Project Office (PPO) was set up in 2004 as part of the CEDAW Southeast Asia Programme, a regional programme funded by the Government of Canada covering seven countries in Southeast Asia, including the Philippines. The programme aimed to increase national capacities for implementing commitments under CEDAW, enhance gender-responsiveness of the judiciary, promote gender mainstreaming in national plans and budgets, and strengthen legislation for gender equality. 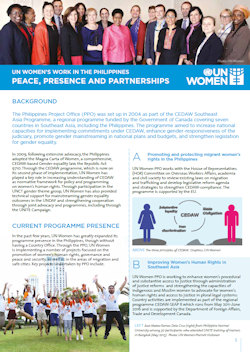 In 2009, following extensive advocacy, the Philippines adopted the Magna Carta of Women, a comprehensive, CEDAW-based Gender equality law, the Republic Act 9710. Through the CEDAW programme, which is now on its second phase of implementation, UN Women has played a key role in increasing understanding of CEDAW as normative framework for policy and programming on women’s human rights. Through participation in the UNCT gender theme group, UN Women has also provided technical support for mainstreaming gender equality outcomes in the UNDAF and strengthening cooperation through joint advocacy and programmes, including through the UNiTE Campaign.

In the past few years, UN Women has greatly expanded its programme presence in the Philippines, though without having a Country Office. Through the PPO, UN Women is implementing a number of projects focused on the promotion of women’s human rights, governance and peace and security, as well as in the areas of migration and safe cities.

Key projects undertaken by the Philippines Project Office include:

Read more about UN Women's Work in the Philippines