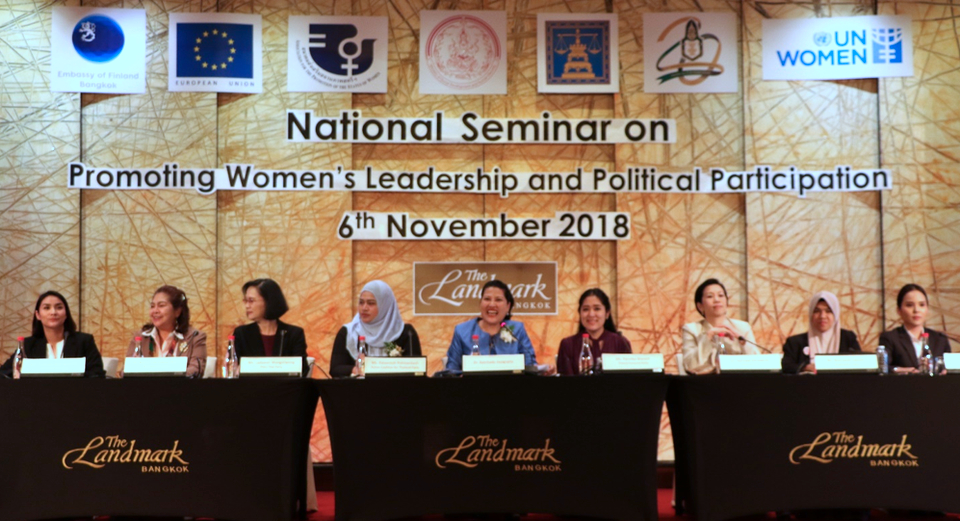 UN Women in Thailand has worked to ensure an enabling environment for women of all ages in to fully participate, lead and engage in political institutions and processes. The percentage of women in national legislatures and local governments has become a standard measure of a country’s achievements in women’s political participation. Women and girls have different public service needs and priorities. Through a series of dialogues across sectors to move forward women’s leadership and political decision making in national and local governance, UN Women has identified joint solutions furthering gender equality and women’s political empowerment in Thailand.

The National Seminar on Promoting Women’s Leadership and Political Participation took place on 6 November 2018 in Bangkok, Thailand[1]. It aimed to raise awareness and encourage more women of all ages in Thailand to fully engage in, participate in or lead political institutions and processes. The seminar gathered around 200 participants (140 women and 57 men), including politicians, civil servants, representatives of international organisations and embassies, gender equality advocates, representatives of civil society, academia, and youth. The seminar affirms gender inequality and discrimination remains in the Thai society and politics. High levels of inequality in the distribution of representation, voice, and influence between women and men in politics reveal the pervasive nature of conscious and unconscious bias against women. Social norms, traditional attitudes, and stereotypes discourage women from entering politics and put them in subordinate roles. Women’s political participation is still limited by age, gender, social status and religious beliefs. Sexual remarks, sexual defamation, violation of privacy, intimidation, threats, hate speeches and other forms of violence against women makes political career unattractive and prompts fear for women from entering politics. Most lawmakers and decision makers at national and local levels are men, and there remain insufficient knowledge and understanding of gender equality issues among some government officials and politicians.

[1]The seminar was a joint initiative and collaboration of the Embassy of Finland, the United Nations Entity for Gender Equality and the Empowerment of Women (UN Women), the Delegation of the European Union to Thailand, King Prajadhipok’s Institute, Department of Women’s Affairs and Family Development of the Ministry of Social Development and Human Security, Rights and Liberties Protection Department of the Ministry of Justice and the Association for the Promotion of the Status of Women.