“Now I take the decisions... I don’t wait for my supervisor to approve everything”
Training sparks women in Timor-Leste to take lead in developing their communities... Learn more
“Now I am aware that violence is not the way to educate others, but through respect”
"When you respect students, they will respect and listen to you,” says Faustino S. de Carvalho... Learn more
From Where I Stand: “Being part of the LGBTI community in Timor-Leste..”
“I hated to look at myself in the mirror because I was a pretty girl but had a male attitude. Then I decided to devote myself to the church to change...”  Learn more
Civil service takes big steps to end workplace sexual harassment
The Civil Service Commission organized a television discussion on the guidelines with UN Women and representatives of women’s groups... Learn more

Timor-Leste (or East Timor) became an independent nation in 2002 after centuries of Portuguese colonial rule, followed by Indonesian occupation and devastating conflict which left most of the population displaced and 70 per cent of the infrastructure decimated.  From disaster to transition, the country has just witnessed the third free and fair Presidential and Parliamentary elections and inaugurated the new government in August 2012.

Currently, the main challenges for women remain deep poverty, frequent cases of domestic violence and lack of recognition of women’s contribution tothe political, economic and social spheres.  Political participation and economic empowerment are particularly crucial as the conflict left nearly half of Timorese women widowed and sole providers for their family.  Sexual and gender-based violence (SGBV) and domestic violence are critical issues for women in post-conflict Timor-Leste.  Domestic violence is the most reported case to the Vulnerable Persons Unit of the National Police, a unit set up with assistance from the UN specifically for vulnerable people including women, children and the elderly. Timorese women have described domestic violence as normal and sometimes, a daily occurrence.

The creation of the new constitution provided an opportunity for women's human rights, and a Gender and  Constitution Working Group was set up with support from UN Women and its partners to ensure that women's rights were included in the new constitution. This resulted in guarantees of equality between women and men, and a declared state objective to promote and guarantee equal opportunities in the political and social sphere for all.  A recent amendment to the electoral law states that 33 per cent of the political parties' lists must be women candidates, resulting in 38 per cent of seats in the National Parliament being women, the highest rate in the Asia Pacific region.  The Ministers of Finance and Social Solidarity, 4 Vice-Ministers, namely Health, Education, Management, Support and Resources, and 4 Secretary of State positions are held by women.   At the local level, there are currently 11 women village Chiefs (Chefes de Suco), 2 women sub-village Chiefs (Chefes de Aldeia), and 6 elders that function as traditional leaders (lian nain).  Each village council is guaranteed 3 women representatives country-wide. 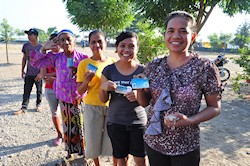 Other legislative measures have come into effect as well, such as the Law against Domestic Violence Law, passed in 2010 naming domestic violence a public crime, and the National Action Plan on Gender-based Violence, a strategy of prevention and provision of services for survivors of gender-based violence and domestic violence.

UN Women established a presence in Timor-Leste with an initial needs assessment in 2000, and opened a project office in 2001. Currently, UN Women works in the following areas:

Gender Responsive Planning and Budgeting
Women in Politics
CEDAW Implementation in Timor-Leste
Women, Peace and Security
Up one level
news

Meet Jacinto Ximenes, a champion for women and girls with disabilities
A Budgeting for an Inclusive Development in Baucau
In a municipality in Timor-Leste, a father is taking action to prevent violence
UN Women programme helps ease violence at schools and homes in Timor-Leste
UN Women continues working to make Timor-Leste university campus safer
END_OF_DOCUMENT_TOKEN_TO_BE_REPLACED

In this edition: (*) A timeline of Women's Contributions to Timor-Leste: 1974-2020 (*) 2020 Gender Equality and Women's Empowerment calendar (*) Timor-Leste launches European Union and United Nations spotlight initiative (*) Safe Baucau and Safe Market task force paves way for a Generation Equality and safer Baucau for all (*) National University of Timor Lorosa’e (UNTL) and UN Women set the standard in the safe campus initiative (*) and much more. Read more