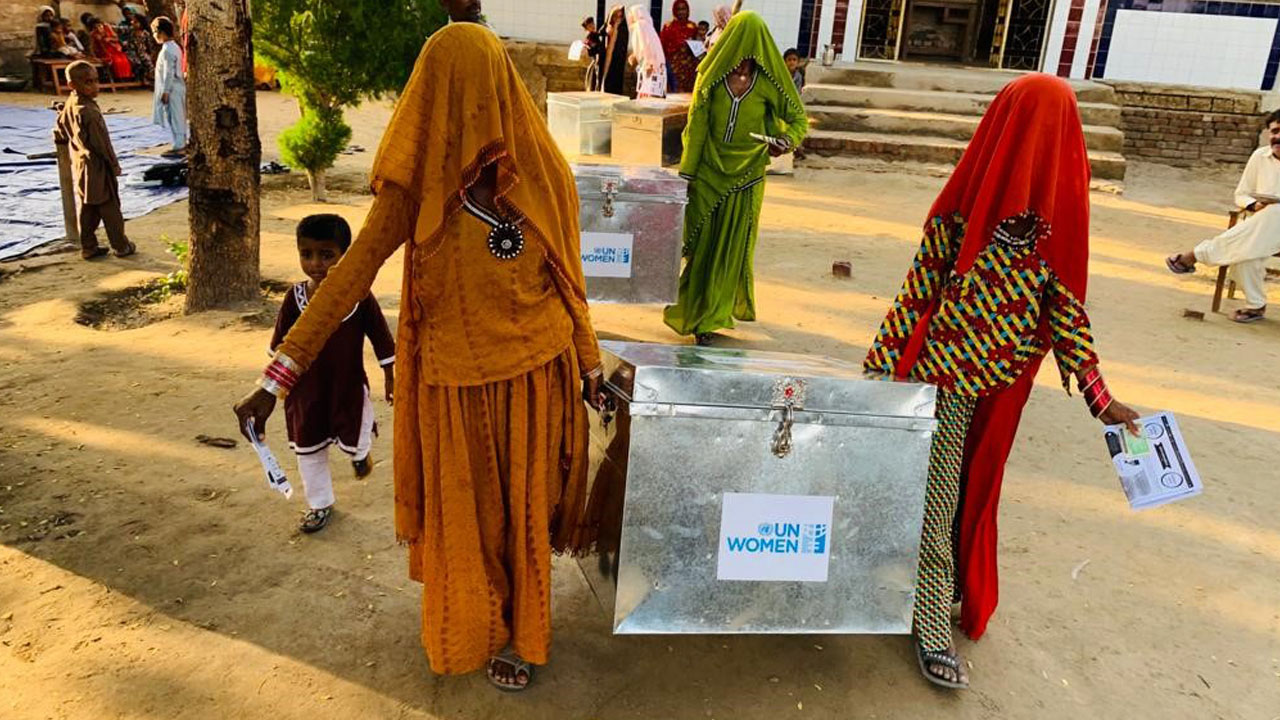 Pakistan is the fifth most populous country in the world, with a population of nearly 227 million people (49.2 per cent female; 50.8 per cent male). Sixty-four per cent of the population of Pakistan is below the age of 30, making it one of the largest young populations in the world. Gender inequality is of significant concern in Pakistan. According to the Global Gender Gap Index Report 2022, Pakistan ranks 145/156 for economic participation and opportunity, 135/156 for educational attainment, 143/156 for health and survival, and 95/156 for political empowerment. Furthermore, Pakistan ranks 130/139 countries on the Rule of Law Index of the World Justice Project.[1] The World Economic Forum’s Global Gender Gap 2022, ranks Pakistan higher on political participation at 95/146 as more women than ever before are participating in political activity.[2] Women, however, continue to remain underrepresented in leadership roles and are restricted from taking up positions in the political/public sphere due to systemic challenges arising from patriarchal notions. According to the Election Commission of Pakistan (ECP), there is a gender gap of around 12.5 million in Pakistan’s electoral rolls. According to UN Women’s calculations, at the current rate of progress, gender parity in national legislatures will not be achieved before 2063.[3] Given recurrent natural catastrophes such as floods, droughts, heatwaves, and cyclones, Pakistan has been ranked as one of the top ten countries most affected (currently ranked 8th) by climate change in the past 20 years, with women being affected the most.

Despite these challenges, Pakistan has taken progressive steps towards protection of human rights by ratifying most international human rights conventions[4] and introducing pro-women legislation, including the National Gender Policy Framework (2022),[5] Anti-Rape (Investigation and Trial) Ordinance (2020) and the Domestic Violence against Women (Prevention and Protection) Act in all four provinces of Pakistan. However, while laws for women’s empowerment and protection from violence are in place at national and sub-national levels, their implementation remains weak. 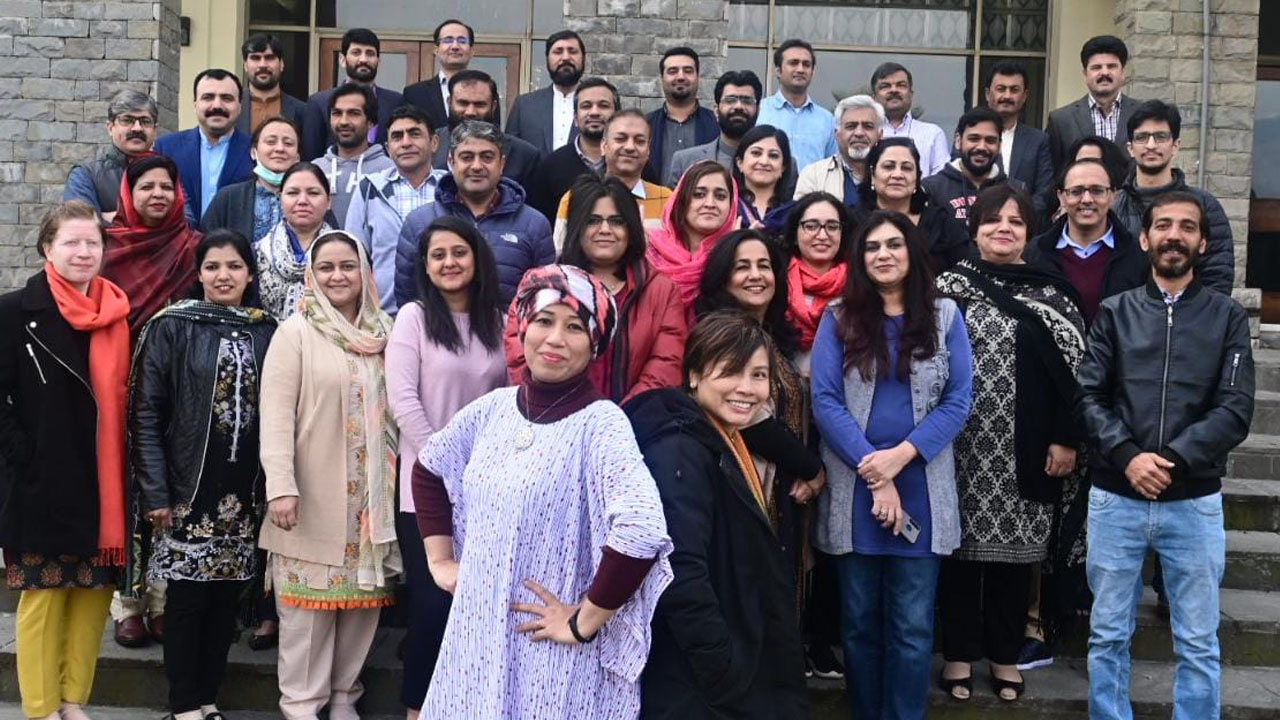 As per the 5th CEDAW periodic review of Pakistan, one of the biggest challenges faced is the lack of consistent data on violence against women (VAW) to support the development of appropriate policy responses, which has led to ineffective and weak policy reforms.[6] From the reported data, violence against women is widespread – 34 per cent of ever-married women have experienced spousal physical, sexual, or emotional violence[7], and 56 per cent of ever-married women who reported experiencing physical or sexual violence have neither sought help to stop the violence nor told anyone.[8] Factors that impede speedy and efficient delivery of justice to women include a low level of understanding of laws among staff of justice sector institutions, the absence of technological solutions to collect data and evidence, patriarchal mindsets and cultural norms that privilege or ascribe higher status to men and lower status to women.

On the economic front, women account for a mere 22.63 per cent of the labor force while men make up 84.79 per cent of the labor force.[9] On average, a Pakistani woman’s income is 16.3 per cent of a man’s income. Of the 5.26 million working in the informal sector in Pakistan, 81 per cent are women.[10] Even though this contribution accounts for 65 per cent of the PKR 400 billion (USD 2.8 billion) in the informal economy of Pakistan,[11] women earn just PKR 3,000-4,000 (USD 15-20) per month and as a result face multidimensional vulnerabilities including low-income security, poor nutrition, occupational health issues, absence of social protection and high economic vulnerability in times of crisis. The Global Wage Report 2019-20 by International Labor Organization explains the gender pay gap variation between men and women between countries and for Pakistan it is 34 per cent. [12] The overarching constraints that restrict economically active women in maximizing their income include cultural constraints of free mobility, restricted access to and acquisition of skills pertaining to business management and expansion, and lack of direct access to markets and technology. 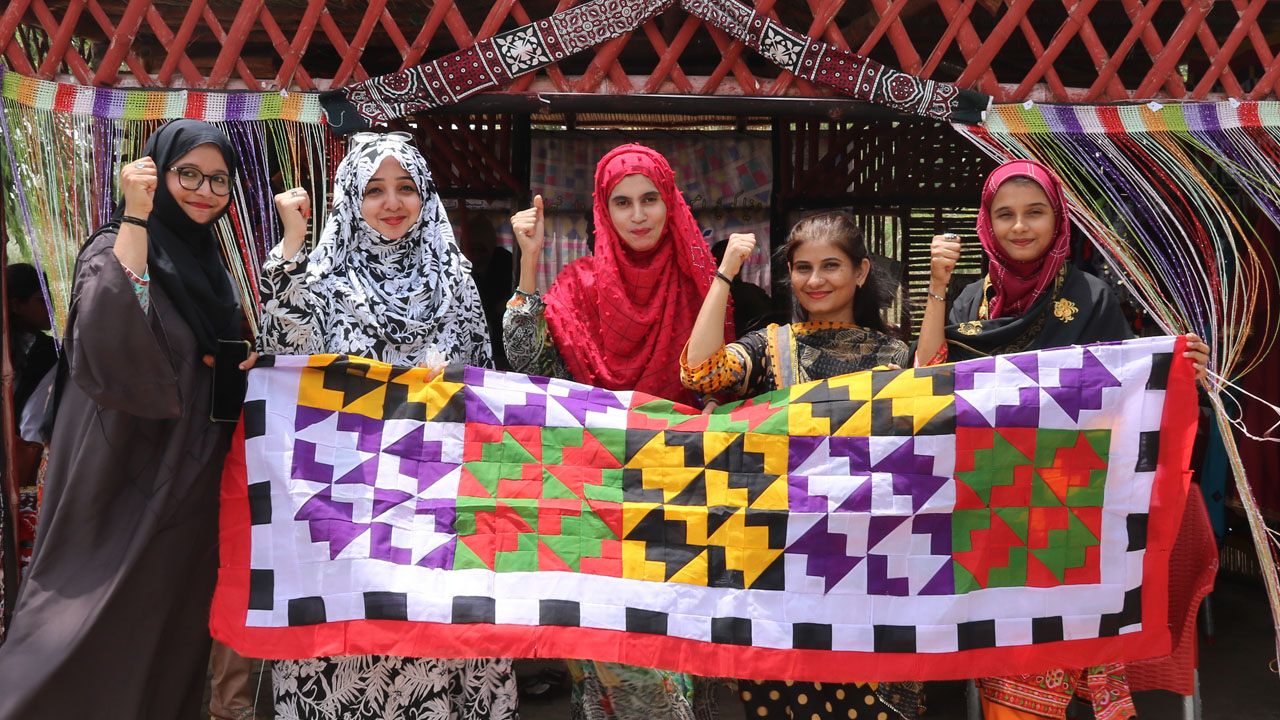 The Government of Pakistan remains committed to the cause of women empowerment. This is reflected in the medium and long term strategic vision documents, the pro-women laws enacted, and the policies of various institutions and ministries to mainstream gender into their planning and service delivery. The Pakistan Vision 2025, which aligns with the United Nations Sustainable Development Cooperation Framework (UNSDCF) 2023-2027 for Pakistan, also prioritizes basic rights and gender equality as central tenants of the country’s development agenda, focusing on the need for gender responsive planning, engagement of vulnerable and marginalized groups, and increased reporting of violence against women (VAW) and related cases. In its first National Security Policy (2022-2026), the Government of Pakistan recognizes ‘gender security’ as a key pillar and aims to “ensure integration of gender equity into national security narratives through full and meaningful participation of women in decision-making, law enforcement, the justice sector, and peacekeeping.” 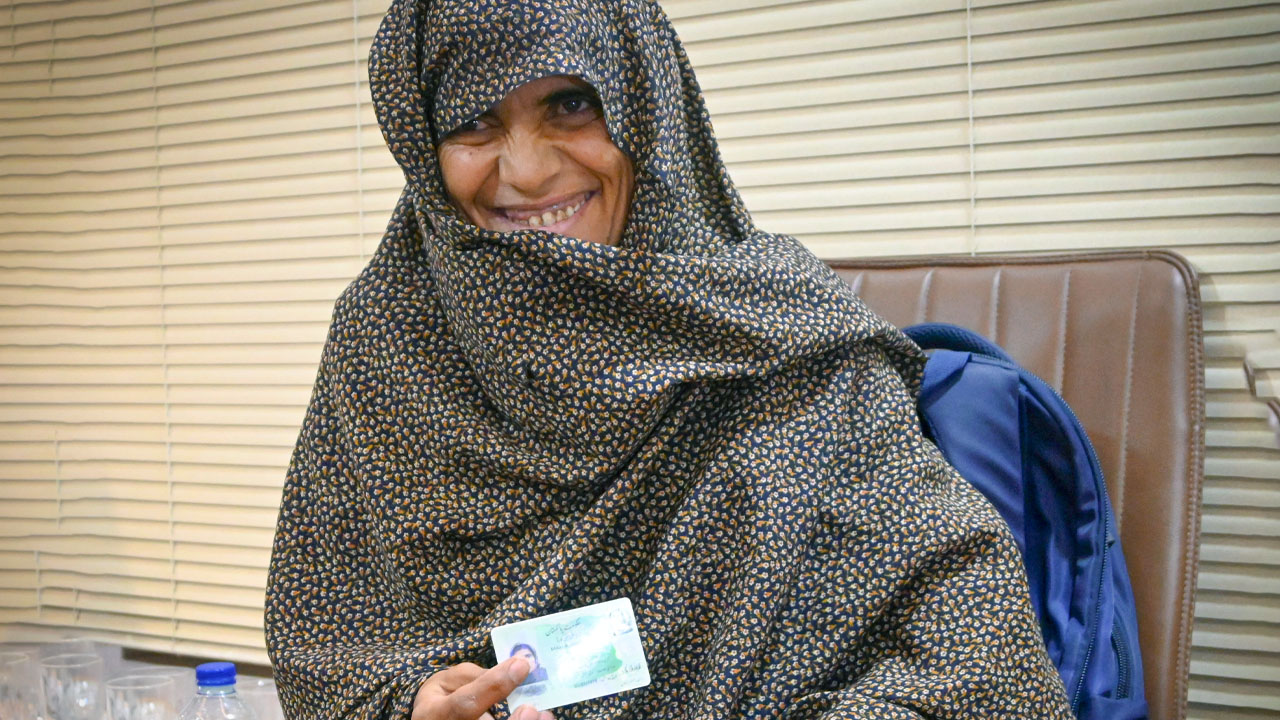 The peace and security landscape in Pakistan also exacerbates issues for women, and stems from regional instability as well as growing divisions between communities on the basis of religious, sectarian and ethnic lines. Ethnicity is deeply rooted in communal, historical, and political backgrounds and is visible where clusters of people are contiguous and interact regularly. Pakistan is not a signatory to the UNSCR 1325 Women, Peace and Security (WPS) Agenda or its complementary Youth Peace and Security (YPS), but has voiced its commitment to the framework that views women and youth as the cornerstone of peacebuilding.[13] The country remains one of the sixth largest contributors to UN peacekeeping, including female engagement teams and troop contribution. Challenges remain in translating Pakistan’s commitments into actions, as the peace and security domain remains securitized. From a regional perspective, the takeover of Afghanistan by the Taliban in August 2021 resulted in increasing refugees and asylum-seekers (mostly women, children and adolescents) in the border areas of Pakistan,[14] making it the third-largest host country of refugees in the world.

Pakistani communities, especially women, are becoming more vulnerable to disaster-driven displacement. Gender-sensitive resilience measures and relief policies must become part of the national discourse. In Pakistan, climate migration has become a growing reality. Pakistan alone is expected to have around 2 million climate migrants by 2050, not including those who will be displaced due to the sudden onset of climate disasters, such as floods and cyclones[15].

[4] This includes the Universal Declaration of Human Rights, Beijing Platform for Action, the Convention on the Elimination of all forms of Discrimination Against Women (CEDAW), and the Sustainable Development Goal Agenda of 2030.

[6] Concluding observations on the 5th periodic report of Pakistan : Committee on the Elimination of Discrimination against Women

Ending Violence Against Women (EVAW)
Economic Empowerment and Sustainable Livelihood
Women, Peace and Security and Humanitarian Action
Partnership and Coordination
Up one level