Three women, of three different cultures, help build peace in Sri Lanka
At the break of dawn, in three different parts of Sri Lanka, three women light lamps and begin their days with prayers. Their chants are unique to their own cultures,&nbsp; but the wish in their hearts is the same -- a future where their children ... Learn more
In the words of Vilashini Weerasinghe
“Female plantation workers face many challenges. They have limited access to education, health and physical infrastructure ... Learn more
In the words of Ishan Priyaranga
UN Women’s multi-party dialogues were very beneficial to us as we understood issues related to gender equality on a macro level ... Learn more
In the words of Chandrawathi Dissanayaka
At present we only have a 25 per cent quota for women in politics, and an even lower percentage of women at decision-making levels ... Learn more
A woman grocery store owner forges ahead amid the COVID-19 pandemic in Sri Lanka
Bhagya Krishanthi, 43, is the owner and manager of a boarding house and a small corner grocery store in Malabe, a suburb a few kilometres outside of the commercial capital of Colombo ... Learn more

Over the years, Sri Lanka has made significant progress on gender equality, particularly in terms of free and equal access to education and healthcare. However, with structural barriers and societal norms that perpetuate gender stereotypes and biases, women continue to be underrepresented and discriminated in the economic, political and social spheres.

In Sri Lanka, women’s labour force participation rate is at a mere 32.5 per cent in comparison to 72.4 per cent for men. Similarly, the youth unemployment rate for women is at 36.3 per cent compared with 21.1 per cent for men. Women’s labour force participation in the country is often compounded by many factors such as the lack of affordable and quality childcare services, lack of support in sharing household work, and some workplace cultures that are not supportive of women employees.

Further, as many women are engaged in informal employment, crises such as COVID-19 have disproportionately affected female-headed households which make up over a quarter of Sri Lankan homes. Many female heads of households, therefore, lack access to social protection and are more likely to carry a triple burden in supporting their family whilst engaging in unpaid care work and domestic work.

At present, women in Sri Lanka are largely underrepresented in politics. Only 5.3 per cent – 12 out of 225 legislators – in the Sri Lankan Parliament are women and the island-nation ranks 182 out of 193 countries on the Inter-Parliamentary Union (IPU). Despite early achievements of producing the first female Prime Minister in the world, the representation of women legislators at the national level has never exceeded 7 per cent throughout Sri Lanka’s electoral history since 1931.

Harmful social norms continue to act as barriers to women’s empowerment in Sri Lanka. According to the Women’s Wellbeing Survey (2019), 35.3 per cent of women in Sri Lanka agreed that men can have a good reason to hit their wife and 47.5 per cent of women felt men are superior to women. It was further reported that 1 in 5 ever-partnered women have experienced physical and/or sexual violence in their lifetime and crises such as COVID-19 has intensified violence against women in the country.

Our work in Sri Lanka

UN Women has been operating in Sri Lanka since 2014. Presently, the office is leading the implementation of UNSCR 1325 on Women, Peace, and Security, which promotes the protection of women and girls against sexual and gender-based violence, women’s equal and meaningful participation in the prevention and resolution of conflicts as well as decision-making, and women’s equal involvement in participating and benefitting from post-conflict recovery and development.

Working closely with the Government of Sri Lanka and other partners, UN Women has further contributed to concerted efforts in bringing about Sri Lanka’s first quota for women’s political representation at the local level; advocating for evidence-based policies with the launch of the first-ever report on gender, disability and employment in Sri Lanka; and the first comprehensive gender analysis of Sri Lanka’s national budget in 2019 to support efforts to institutionalize gender-responsive budgeting. In line with the 2030 Agenda, UN Women Sri Lanka is working to ensure that women’s economic empowerment is at the heart of COVID-19 response and recovery while ensuring that standards are in place to accelerate progress towards gender equality in the country.

Impact of COVID-19 on Women
in Sri Lanka

When the pandemic struck Sri Lanka, those who faced some of its most severe and unforeseen impacts, were women. These are real stories of women who have been affected by the pandemic in Sri Lanka.

Promoting Women’s Engagement takes an innovative approach to peacebuilding by bringing communities together to provide a sustainable solution for a shared environmental issue, with women at the forefront.

In the words of Nadesan Suresh

Based on international standards, many policies have been put forward to ensure the safety of women and to address inequalities. However, implementation is lacking. If a woman goes to the police station to make a complaint, the system is such that they don’t often feel safe and protected.

In the words of Kaushalya Hapuarachchi

‘Serving women and children gives me hope for the future’

Addressing and responding to sexual and gender-based violence is an integral aspect of the Women, Peace and Security Agenda. 46-year-old L.D. W Sanjeewani is a Chief Inspector of Police, serving in the Polonnaruwa Police Division in the North Central Province of Sri Lanka. She has over 25 years of experience helping survivors of violence.

Bhagya Krishanthi, 43, is the owner and manager of a boarding house and a small corner grocery store in Malabe, a suburb a few kilometers outside of the commercial capital of Colombo. She built up her store from humble beginnings, first selling simple items such as coconuts, oil, and eggs.

“It is only by survivors coming together that strong movements are birthed”, says Shreen Saroor from the Women’s Action Network (WAN) in Sri Lanka, a collective of women’s groups that empowers and advocates for women and women survivors of war, violence and other injustices.

A conversation with H.E. Eric Lavertu Ambassador of France to Sri Lanka and the Maldives, Mohammad Naciri, UN Women, Regional Director for Asia and the Pacific, and Ramaaya Salgado, Country Focal Point, UN Women Sri Lanka. This is an article developed by Daily Mirror in Sri Lanka as part of the Generation Equality campaign.

Improving waste management starts at home, but its benefits go well beyond -- to a cleaner environment, more peaceful communities, and greater social and political leadership by women, who are key to making it all happen.

“During the COVID-19 lockdown, we struggled to find money for food. We managed to take loans from our neighbours,” says Tharshani Kumar*. “I had to send my son to school without breakfast every morning. I was afraid that he would not be able to continue his education.” 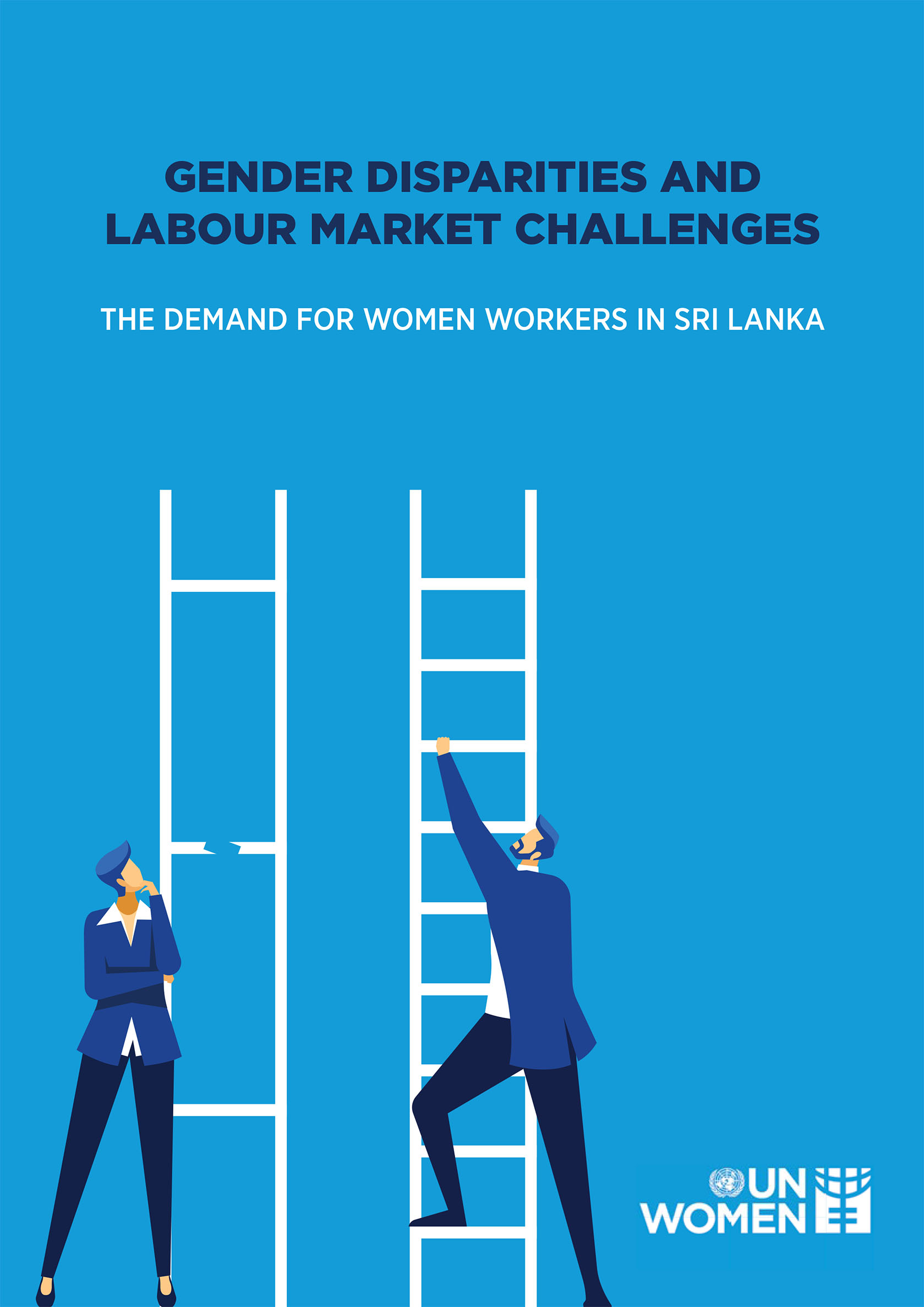 This study addressed this gap in the literature by analysing primary and secondary data from private, formal enterprises in the manufacturing, trade, and service sectors to understand the attributes of firms that influence the demand for women workers. Download