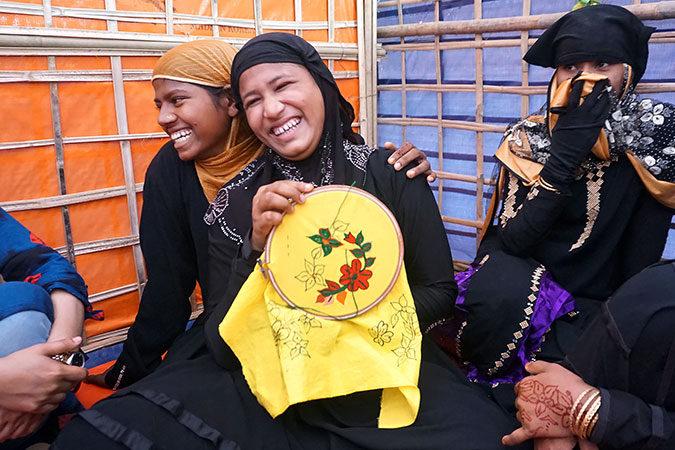 A DAY IN THE LIFE

Curious about what we do? Follow us into the field for a day

Where programming gaps are identified, UN Women responds operationally in crisis contexts. UN Women provides crisis-affected women with the protection, empowerment and livelihood services they need not only to survive but also to recover and develop their resilience and that of their families and communities to crisis risk in the future, with a focus on the most vulnerable and excluded groups of women.

After landslides in Bangladesh, UN Women helped indigenous women in Chittagong Hill Tract restore and diversify their livelihoods by providing Multi-Purpose Cash Grants and skills training, along with training on disaster preparedness to increase their resilience to future natural hazards. In Rohingya refugee camps in Cox’s Bazar, furthermore, UN Women has been assisting Rohingya women since 2014 together with UNHCR with skills training and establishment of community-based shelter to protect survivors of gender-based violence (GBV). To promote women’s leadership and enhance women’s participation and empowerment in the refugee camps, UN Women also formed Women’s Support Groups (WSGs).

After the earthquakes hit Nepal in 2015, UN Women supported women’s recovery, dignity, and safety through the distribution of dignity kits, solar lanterns, radio sets, and sanitary napkins. Distribution targeted the most vulnerable women, including widows, female-headed households, women with disabilities, and elderly women. UN Women also established five multi-purpose women’s centres, each serving to provide psychosocial counselling, provide life-saving information referrals, facilitate early recovery and livelihood activities, and provide safe spaces for women in need. In total, UN Women’s Multi-Purpose Women’s Centres served over 22,000 women and girls who had been excluded from the response, helping them rebuild their lives and economic resilience. In 2017, UN Women continued support to the multipurpose women centres with 5,458 women and girls strengthening their capacity to prevent, prepare for and recover from humanitarian crisis and enhance their resilience in three districts of Nepal (Gorkha, Sindhupalchowk and Nuwakot). As a result, women reported that their alternative livelihood options were strengthened and their engagement in developing the municipality level local disaster risk management planning framework had increased.

Women’s groups in Nepal speak about the impact of the 2015 earthquake, and the roles women played in post-disaster response and recovery. Video: UN Women/Nathan Beriro

After Tropical Cyclone Winston hit Fiji in February 2016, UN Women was on the ground setting up temporary market spaces that restored women’s livelihoods and linked 20,000 women and girls to life-saving information, care, and humanitarian aid. A national referral pathway developed by the Ministry of Women, Children and Poverty Alleviation and UN Women also linked 13,000 women to support services, including nearly 400 women with disabilities who experienced, or were at risk of experiencing, GBV.

“After Cyclone Winston, it was important to include everybody in market decision-making. We want to empower our market vendors to be climate resilient.

Since then, we have worked with UN Women on the market’s very first “Action Plan to Build Resilience to Climate Change and Disasters”. We know that to be resilient we need to diversify [our sources of income], so we are training our women vendors on how to make handicrafts and in other small businesses such as money lending and catering.

Through UN Women’s leadership training, I learned to be confident when speaking out about the issues affecting the market vendors and to negotiate with the market council management.”

After a devastating drought that affected 2.3 million people in Viet Nam in 2016, UN Women with the support of the Republic of Korea worked to improve the hygiene and sanitation conditions of 17,500 women and girls in 7,500 poor and near poor households. By distributing personal hygiene kits and raising awareness of the importance of sanitation practices and good nutrition, UN Women helped women restore their dignity, protect their health and that of their families, and play active roles in reducing the risks of disease outbreaks.

To further build resilience in Vietnam, UN Women supported the Viet Nam Women’s Union in becoming a full member of the National Committee for Natural Disaster Prevention and Control, resulting in increased attention to gender in disaster risk reduction efforts nationwide, and increased numbers of female members of disaster preparedness committees at local and national levels. For the first time, a total of eight gender-sensitive commune-level DRR plans were developed by committees involving equal amounts of men and women. UN Women also supported the development of 700 household disaster preparedness plans, including practical training on swimming and first aid for women – skills that may prove life-saving in disasters.

Vietnam Airlines launches orange flights to raise awareness of violence against women
"Am I a Feminist?" Online event by new youth network discusses the elephant in the room
Coverage: United Nations Assistant Secretary-General and UN Women Deputy Executive Director in the Republic of Korea
Take Five: “Gender equality is everyone’s business and responsibility. When gender equality is effectively pursued, everyone wins.”
UN Women and Ant Foundation launch “Together Digital” to empower women entrepreneurs in the digital economy
END_OF_DOCUMENT_TOKEN_TO_BE_REPLACED