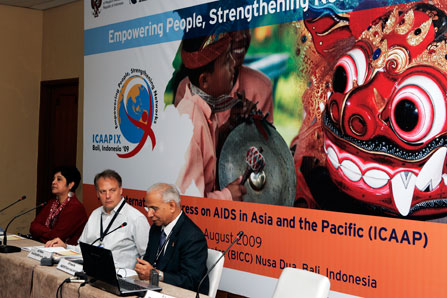 Although much progress has been made in part of the Southeast Asia region, AIDS is increasingly acquiring a women’s face. As per the 2008 WHO estimate 3.5 million people are currently living with HIV in Southeast Asia. Of the total number of people living with HIV, women account for 33%, which is lower than the global average of 50%1. There has been an upward trend in the proportion of women living with HIV in the region from 19% in 2000 to 35% in 20082. This is true even in the case of Thailand, one of the few countries in the world to have reversed the trend of the epidemic, where the proportion of women among all reported AIDS cases has increased from 14% in 1990 to 39% in 20083.

UN Women’s current research in the region shows high prevalence rates amongst the erstwhile considered low risk women, namely women in intimate partner relationships who contracted HIV from their partners. This at the same time reveals the multiple vulnerabilities of women to HIV and its disproportionate impact on women in general. Much of the current international HIV/AIDS response assumes that women and men are equal, and are therefore equally empowered to protect themselves, make decisions about their sexual activity, and access health care. This lack of a gender perspective on the HIV/AIDS crisis has led to women assuming a greater share of infection and negative impacts from the disease. Unequal power relations between men and women are a major obstacle for women and girls in accessing prevention, treatment and care and support.

UN Women’s Approach
UN Women brings principles of Gender Equality and a rights-based approach to achieve the goal of halting and reversing the spread of HIV in the region. UN Women works in the following ways:

Empowering Women’s Networks
UN Women advocates for the inclusion of women living with HIV in policy and decision-making activities to address HIV prevention, care and support, and a more broad-based leadership in national networks of positive women where they exist.

Building Evidence for Advocacy
UN Women advocates for increased knowledge building on gender and HIV/AIDS. The inadequacy of informed and evidence-based research means that we don’t know enough about how HIV/AIDS affects women in the region, which in turn leads to less-effective responses.

Improving Technical Capacity
UN Women facilitates information flows between stakeholders on gender and HIV, and enhances coordination at both regional and national levels so that HIV issues are considered in women’s rights programmes and initiatives, and a gender perspective is incorporated into the HIV/AIDS response.

UN Women in Action
Up one level
news