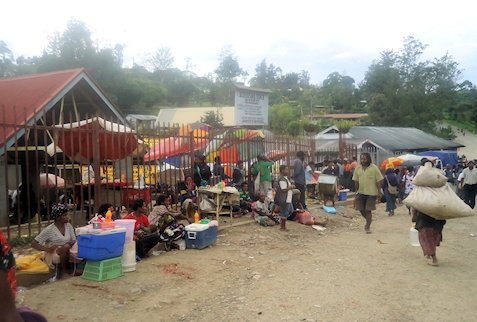 Kundiawa Town Market is a small market in terms of its capacity and facilities. Nonetheless, it services a town population of over 5,000 residents and provides income generation for more than 200 families. The market is managed and owned by the Kundiawa Local level Government Council (KLLGC) and comes under the direct oversight of the Kundiawa Town Manager. After it opened in 2008, there have been management issues with; revenue collection and receipting, toilets, water, security and waste removal. These issues have persisted over many years. In light of the current confusion between the separation of politics and the administration of the market, no one has really been accountable for the mismanagement of the market and no one has pushed the agenda of upgrading and overhauling market services and facilities. There is no markets development plan or policies and by – laws to guide the management of the market. Yet 90% of the market vendors who are women continue under pervasive conditions. Their resilience has shown that the market does provide a source of income for them and that alone is an indicator for development partners, government and civil society to focus on improving and maintaining the market services and facilities.

The Partnerships to Improve Markets (PIM) Project is an initiative funded by the International Fund for Agriculture Development (IFAD) and managed by UN Women PNG Country Office. The main objective of the PIM project is to strengthen the concept of mainstreaming gender into the management and governance of markets. The PIM project is a regional initiative and Kundiawa Market was selected in Papua New Guinea. The project will end March 31st 2013. Since the initiative started in 2011, progress has been slow. It was only in 2012 that, positive results started to surface.

Catholic Women’s Association (CWA) was contracted in 2012 to deliver some components of the project. Their tasks include following up on government, liaising and convening stakeholder meetings ( Technical Steering Committee) , conducting awareness, preparation of logistics for trainings and reporting to UN Women PNG Country Office. To date, CWA has completed most of its deliverables.

Numerous consultations have been held with the senior officials from government including the Administrator Joe Kunda, the Governor Hon. Noah Kool, the Deputy Governor and Lord Mayor Tine Songan and Kundiawa Town Manager Alex Albert. All have shown appreciation that the selected site was Kundiawa Town Market. The project works directly with the Kundiawa Urban Authority because the Authority manages the administration of the market.

Experts discuss how to address the gender digital divide
Press Release following UN Deputy Secretary-General and UN Women Executive Director's Visit to Afghanistan
Strengthening Collaboration to Advance Gender Equality and Human Rights
Three women sow seeds of peace in their communities in Sri Lanka
Take Five: “Even though people on the island have hardship … they are ready to deal with future mishaps from climate change or natural disasters.”
END_OF_DOCUMENT_TOKEN_TO_BE_REPLACED