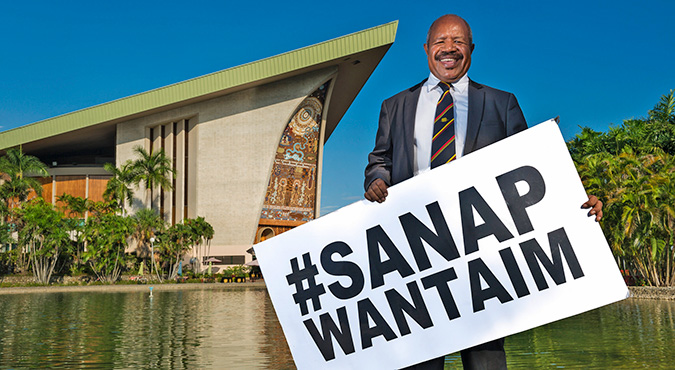 On 28 October 2016, UN Women PNG, supported by the Australian Government, and in partnership with the National Capital Commission of Port Moresby, will launch a behaviour change campaign: SANAP WANTAIM: the new normal.

As the cornerstone to the Safe Cities Program, the solidarity campaign has been established to rally men and boys throughout the city to stand side by side with women and girls as partners and allies. The campaign seeks to make the city safe for women and girls and inspire awareness, advocacy to action.

The campaign calls upon men and boys, women and girls from all walks of life to conceive and implement activities that will embrace their role in making the city safe and drive the ambitious goals of the campaign.

Driven by youth, who bring diverse knowledge to the Campaign, the Campaign will use every avenue to spread the message of change.

(*) The Sanap Wantaim Campaign is funded by Australian Government

Resources
Up one level

"Am I a Feminist?" Online event by new youth network discusses the elephant in the room
Ending deadly violence against women in Asia and the Pacific requires thorough data collection for prevention measures
Pushing forward: Resisting systemic violence in Afghanistan
Take five with Sultana Kamal: If you believe in Human Dignity, then the Principle of Leaving No One Behind should automatically be in your agenda
In the words of Adelah: “I believe that with gender equality, peace will come”
END_OF_DOCUMENT_TOKEN_TO_BE_REPLACED