Developed as part of a partnership with UN Women, as part of the Safe Cities Global Initiative, the Safe Cities Metro Manila (SC MM) promotes deeper understanding of the lack of security that women in the country feel as they move about in the city — using public transport, lining up in terminals, going around markets/malls, and even just walking home in their own neighborhoods. Whether due to shame or fear, women traditionally just ignore and keep silent about the various forms of sexual harassment that they experience such as catcalls, sexual innuendos, stalking or repeated harassment for their numbers, male public exposure, rubbing or groping (panghihipo) inside the MRT or jeepneys, and lascivious and indecent hollering after them. 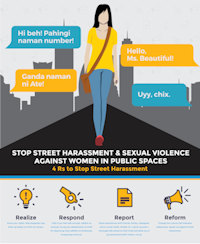 Just as it is around the globe, sexual harassment (SH) and other forms of sexual violence (SV) in public spaces is also an everyday occurrence for women and girls in one of the world’s largest megacities – Metro Manila.

Journeys out of the Ordinary

Abegail - My journey started when a woman in my village connected me and several other women to a “recruitment agency” offering waitressing jobs in Malaysia. Read more