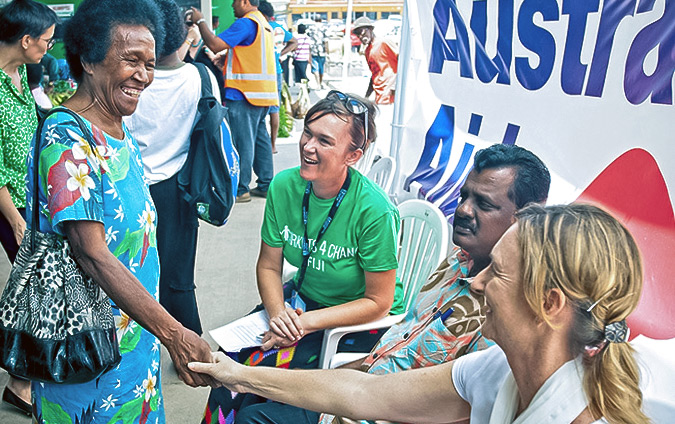 UN Women’s Aleta Miller with Hon Parveen Bala Kumar (Fiji’s Minister of Local Government), and Suzanne Bent (First Secretary of Gender Equality for Australia's Department of Foreign Affairs and Trade in Fiji) in Rakiraki at the handover of tents that act as a temporary market space while the new market house is being built. Photo: UN Women/Murray Lloyd

"Humanitarian assistance should be gender sensitive and address women's specific practical and strategic needs. Understanding gender differences, inequalities and capacities will improve the effectiveness of our humanitarian response and we must work together to promote and achieve gender equality - this is a shared responsibility of all humanitarian actors."

Although there is increasing evidence that women bear the brunt of the impact of disasters and crises, women's empowerment is an agenda that still lags behind in regional and national humanitarian action and DRR platforms. With its strong technical expertise, UN Women provides both coordination and technical capacity to ensure that the planning and implementation of humanitarian response, recovery and preparedness as well as DRR adequately integrates gender equality and women's empowerment so that the needs and vulnerabilities of all women, girls, men and boys in crisis-affected populations are identified and addressed.

On the ground in an emergency, gender coordination work translates to a cohesive, systematic, and principled approach to gender in humanitarian settings, including in Fiji after Cyclone Winston, Nepal after the 2015 earthquake and 2017 floods, and Bangladesh during the ongoing Rohingya refugee crisis. With its strong relationships and extensive experience working with women's CSOs and mechanisms across the region, UN Women is committed to catalysing the empowerment and engagement of women and thus bringing about transformative change in across the humanitarian-development continuum. Such change includes a focus on diversity and localization, and bringing together women's and human rights CSOs with humanitarian actors.

In Nepal, within a week after the 2015 earthquakes, UN Women brought together eleven diverse women's CSOs to develop a Common Charter of Demands for gender equality and the empowerment of women in the humanitarian response. UN Women also supported the organization of a national women's conference on gender-responsive disaster risk management, where 90 women leaders and earthquake survivors adopted a 15-point Kathmandu Declaration.

In the Pacific, UN Women and DIVA for Equality facilitated a sharing circle at the Regional Pacific Humanitarian Partnership Meeting that brought together gender equality and human rights perspectives from diverse local humanitarians, including women with disabilities and LBTIQ women. At the ILGA Asia 2017 conference, UN Women along with partners APCOM, IPPF, and Edge Effect convened a session on LGBTIQ+ persons in humanitarian settings, the first such session to take place at a ILGA conference.

UN Women also serves at the forefront of gender coordination for humanitarian action through its roles in leading gender and protection coordination mechanisms across the region, breaking ground by creating platforms specifically for and about the integration of gender. One such example is in Nepal, where UN Women co-chaired the Inter-Cluster Gender Working Group (GWG) with OCHA, which was established as the first working group for GEWE within the humanitarian sector. The GWG led effective mainstreaming of GEWE in the earthquake response and programming work of clusters. Additionally, the group developed gender equality indicators to track women's participation in decision-making committees and to understand the different perceptions of women and men on the adequacy, fairness, and transparency of relief efforts after the 2015 earthquake.

At all stages of disaster preparedness, response, and recovery, UN Women supports other humanitarian actors, including governments, UN agencies, NGOs, and CSOs, in ensuring that their humanitarian programming is gender-responsive, and meets the needs of the most marginalized women and girls.