The Lao People’s Democratic Republic (Lao PDR) is a landlocked country bordered by China, Myanmar, Viet Nam, Cambodia and Thailand. After years of regional and internal conflict Lao PDR is currently governed the Lao People’s Revolutionary Party (LPRP), the only legal political party in the nation. One of the region’s poorest countries still heavily dependent on subsistence agriculture, Lao PDR has experienced some economic growth in recent years following tentative reforms and has taken some positive steps forward towards meeting the Millennium Development Goals.

The primary challenges to gender equality are in enabling equal access for women and girls to opportunities and resources, particularly for rural and marginalized women. Illiteracy, poor reproductive and basic health, food insecurity and economic disenfranchisement rank high among development priorities for women.

LAO PDR ratified CEDAW in 1981, the second country in the region after the Philippines, but it the first state report was only submitted to the CEDAW Committee for review in 2005.

Currently, knowledge of CEDAW is confined mainly to senior government officials or senior members of the mass women’s organization, the Lao Women’s Union (LWU). There is a need for greater public advocacy and training of district officials, to encourage greater awareness of CEDAW and of women’s human rights in general. The National Commission for the Advancement of Women (NCAW), established in 2003, serves as the country’s national women’s machinery. NCAW is tasked with formulating and implementing national policy for the advancement of women, as well as monitoring implementation of the Convention and the Beijing Platform for Action.

UN Women has been working towards women’s empowerment and gender equality in Lao PDR since 1993. UN Women works in the following areas: 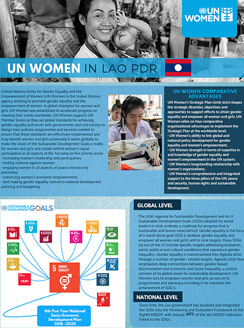 It works globally to make the vision of the Sustainable Development Goals a reality for women and girls and stands behind women’s equal participation in all aspects of life, focusing on five priority areas... More