“Now I take the decisions... I don’t wait for my supervisor to approve everything.” 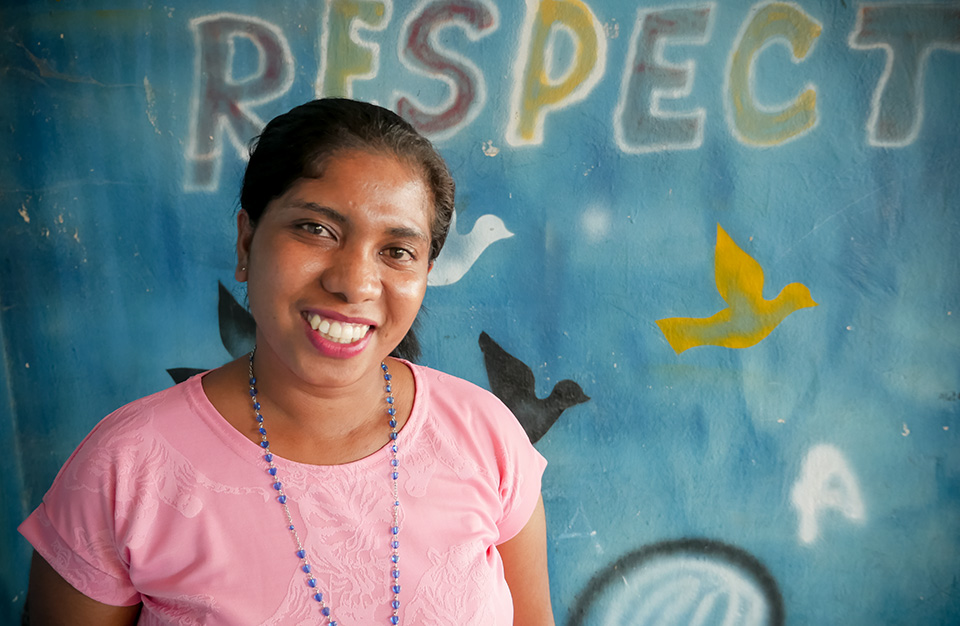 Covalima, Timor-Leste — Hilaria Amaral do Carmo is the only female Programme Coordinator of the Covalima Community Centre in southwestern Timor-Leste. She radiates confidence as she works to improve conditions for women. But she wasn’t always like this. She recalls with a laugh how she used to seek approval from her supervisor for even the smallest of decisions.

Amaral do Carmo credits her newfound confidence to the leadership skills she learned from Ba Futuru (For the Future), a non-governmental organization supported by UN Women.

“Now I make the decisions, after consulting with the beneficiaries,” she said. “I don’t wait for my supervisor to approve everything.”

Amaral do Carmo was among two women and three men from Covalima who took Ba Futuru’s training and have gone on to in turn train 97 other people (92 of them women), including members of women’s and community groups. She jumps in our car and proudly guides us to meet with some of the women community groups that Covalima Community Centre supports, including Halibur Maudemo (Gathering in Maudemo), a group of 10 women in Maudemo, a village of about 2,500 people.

The women support each other in difficult times with loans and other economic assistance. Monica Moniz said the leadership skills she learned from the Centre have done more than just help her to lead Halibur Maudemo. They also allowed her to be able to talk to her husband about more equitable domestic responsibilities. Now, Moniz said, “My husband and I share our household tasks. When I have to go to the market, he will take care of the children. He will even cook.” 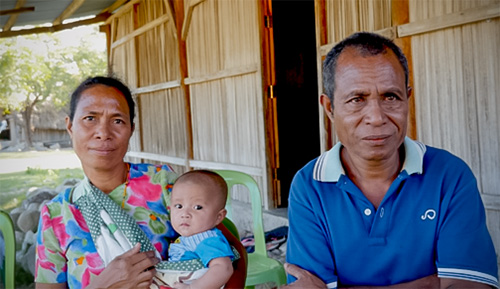 Norberto Oliveira da Silva, a farmer shown here with his wife and granddaughter, has attended trainings provided by Amaral do Carmo. He says: “Through this training I learned that men and women can help each other. Men can go to the market. Men can work in the house.” Photo: UN Women/Emily Hungerford

We then continue on the road to meet with the weaver’s group Fitun Naroman (Bright Star) near Suai city southwest of Dili. The group was established in 2010 with help from Covalima Community Centre and its partners.

Many of the homes in their village are tall traditional pillar houses with colorful woven doors that stand in contrast to the electricity cables. 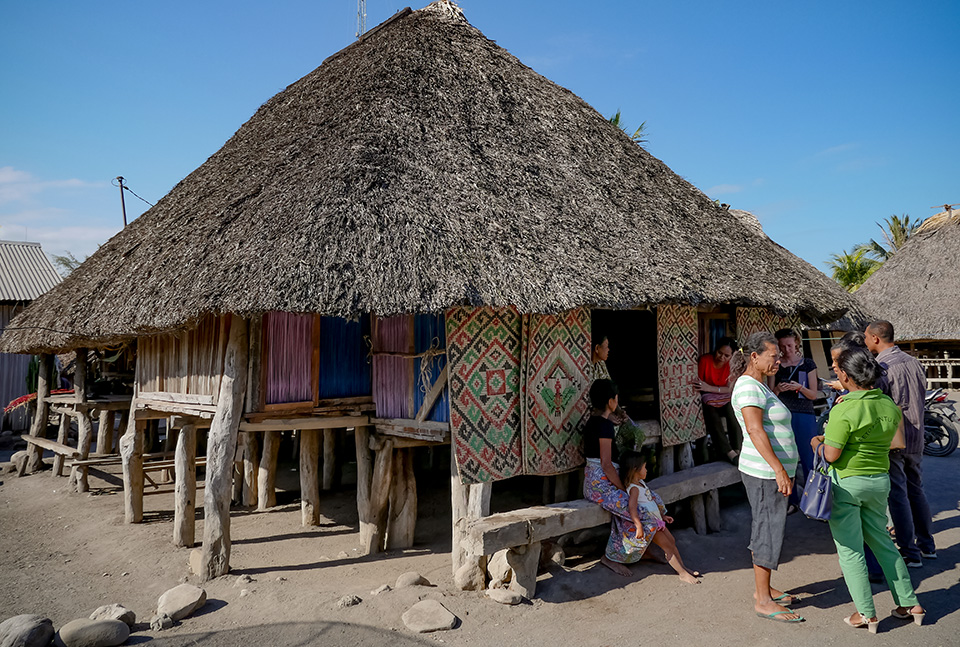 The workers are keen to show visitors their traditional tais weaving, a skill that is often passed down from mother to daughter. One piece of cloth takes a month to weave – more if the weaver also has to take care of children or household chores. The tradition is weakening as many weavers now prefer to buy ready-made dyed threads from Indonesia. The Centre has facilitated trainings on using traditional dyes to weave the cloth, which the villages can sell for a higher price. 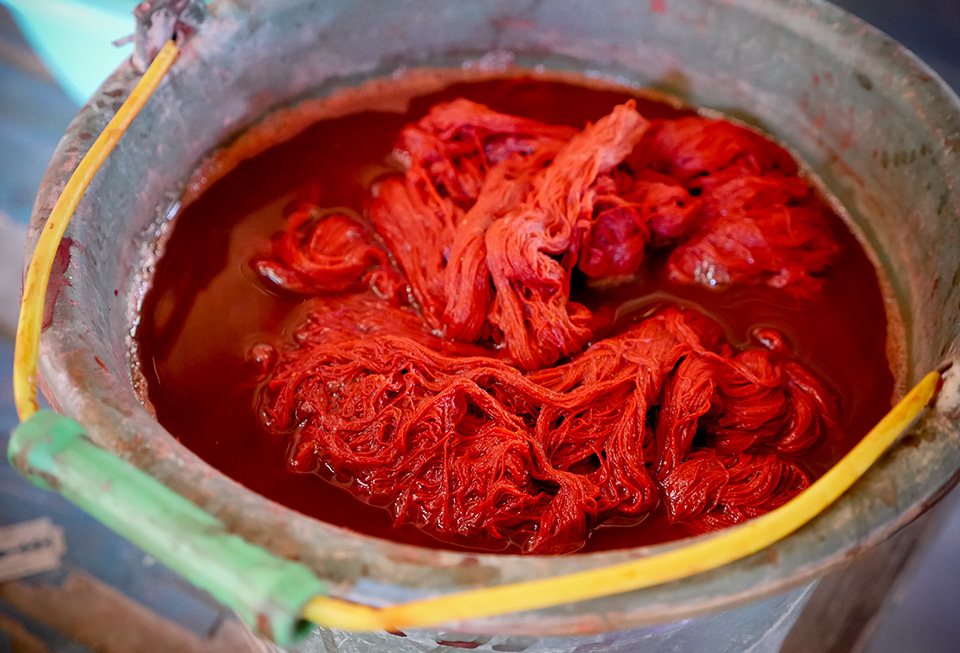 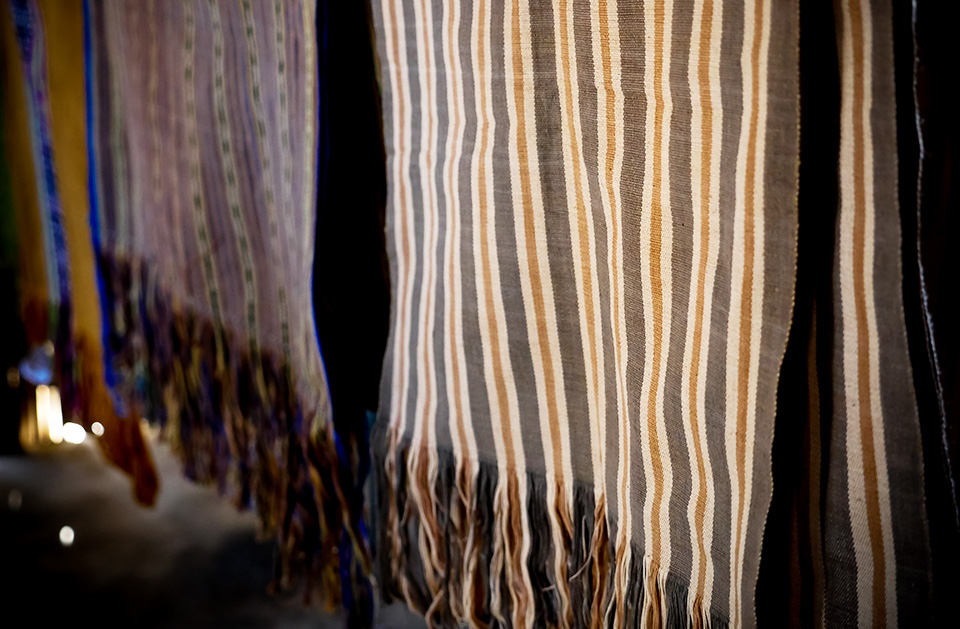 Members of the weaving group said the leadership skills they learned from the Centre also motivated them to take greater responsibility in community affairs. One group member is also the chief of the hamlet; she plans to stand for the position of village chief in the next village elections.

Ba Futuru has partnered with UN Women under its Women, Peace and Security programme since 2017 to mentor 19 female community leaders and to train 14 women and men including the five in Covalima. The trainings focus on topics including advocacy, prevention of gender-based violence, community activism, public speaking, planning, and ways to promote peace and security in the local communities. The Ba Futuru-UN Women partnership is funded by the Government of Japan and ends in December. 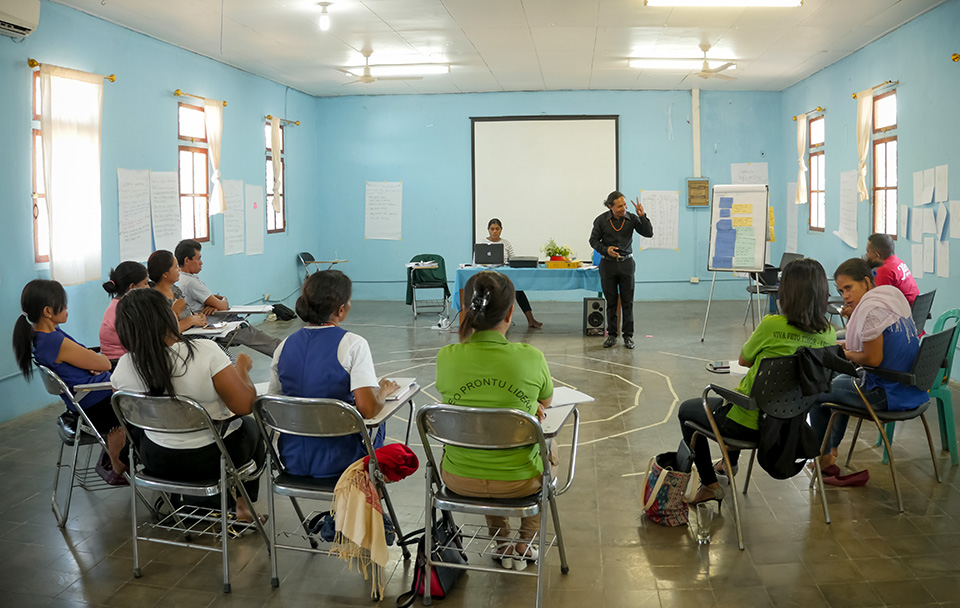 Timor-Leste has a longstanding and vigorous women’s movement that was strengthened by the participation of women in the long independence struggle. After independence was regained in 2002, women actively lobbied for equal rights. Today, women hold 40 per cent of seats in the Parliament.

However, progress isn’t always evident outside the national capital. Covalima is a striking example. Only two of its 48 administrative personnel are women, and of the 30 village chiefs, only one is female. The next step in state-building is decentralization of governmental authority and strengthening of the municipalities. For this to succeed, women must have an equal role in planning and in using their skills to help develop the young nation.

Related News
05/07/2021
The unseen strands: Looking at the state of violence and gender in Timor-Leste
08/02/2021
For Equality and the Economy: Exploring the Gender Dimension of Timor-Leste’s Tourism Sector
20/08/2020
Camille Wauters “We see how positive these changes have been for the whole society.”
20/04/2020
From where I stand: “I’m hoping that things will get better so I can have my job back.”
22/11/2017
The untapped potential to contribute: Rural women report on implementation of the 2015 Maubisse Declaration
END_OF_DOCUMENT_TOKEN_TO_BE_REPLACED