Violence Against Women and Girls Pakistan - in the Press

ISLAMABAD, July 27 (APP): President Asif Ali Zardari has said that the Government has decided to appoint women judges in the judiciary as part of its efforts to take social, economic, legal and constitutional steps for the empowerment the women and for their protection from all kinds of exploitation and violence. Addressing the concluding ceremony of “One Million Signatures Campaign to stop violence against women” at Aiwan-e-Sadr on Friday, the President said that discrimination against women was deeply routed in all spheres of society –social, political, economic and legal. He said women issues were not limited to Pakistan alone but other countries in the region were also facing similar issues. He said that there was a need to bring a positive change in the attitudes of men towards women. A traditional mindset, he said, takes time to change but positive actions were being taken to bring about the desired change. The President said that Violence against Women was a fundamental violation of human rights and one of the worst forms of discrimination against women. He said that it undermined women’s dignity and self-esteem and deprived them of their right to full participation in all aspects of national life. The President said that the democratic Government is inspired and guided by the vision of Shaheed Benazir Bhutto to end exploitation of women and to empower the women in the true sense. He said that it was during the tenure of Shaheed Benazir Bhutto Pakistan became signatory to the Convention on the Elimination of the All Forms of the Discrimination Against Women (CEDAW) and also signed the Convention on the Rights of Child. This, the President said, demonstrates our commitment to end all discriminatory practices against women from our social fabric. The President said that the Government has accorded high priority to addressing the issue of discriminatory laws against women and concerted efforts were being made to eliminate abuse of women in all its forms with active involvement of women parliamentarians and representatives of civil society organizations. While acknowledging the challenges ahead, the President expressed the hope that we would be able to do much more for the cause of the women in future. The President also recounted various legislative measures taken by this Government for the protection of the women. He said that adoption of the Protection against Harassment of Women at the Workplace Act, 2010, passing of the Criminal Law (Amendment) Act, 2010, adoption of the Criminal Law (Second Amendment) Act, 2011, passing of the Criminal Law (Third Amendment) Act, 2011, promulgation of Women in Distress and Detention Fund Act, 2011 were some of the important legislative measures taken for the women. He said that efforts were also underway to provide relief to the victims of domestic violence through legislation. Besides, the President said, 26 Shaheed Benazir Bhutto Centers for Women have been established in various districts to provide immediate relief to female victims of violence. The President said that Benazir Income Support Program (BISP) as the poverty alleviation program has been so designed to empower women and millions of women were being benefited through this program. He said that National Commission on the Status of Women has been strengthened to monitor the violation of women’s rights in the country through new legislation. The National Commission for Human Rights Act, 2012 has also been enacted to monitor the overall human rights situation, the President said. However, a lot still needs to be done, he continued. The President, on the occasion, congratulated the management and all those associated with the campaign who, through this initiative, have complimented the efforts of the Government, civil society organizations, UN partners and donors to address issues in violence against women and girls. Earlier the President also became millionth signatory of the “One Million Signatures Campaign to stop Violence against Women reaffirming his commitment to support women related legislation, raise awareness and not to tolerate violence on anybody and to support the changing behaviours.

President Asif Ali Zardari says the government has taken a number of steps for women empowerment‚ eliminates all forms of discrimination against them and was even considering to appoint them judges in the judiciary. 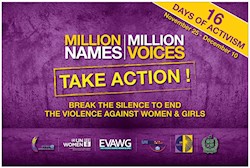 He was addressing a signing ceremony to conclude one million signatures campaign‚ to increase awareness about violence against the women. The President said the democratic government‚ inspired and guided by the vision of Shaheed Benazir Bhutto‚ passed a number of legislation to ensure the rights of women and their empowerment in the true sense. President Zardari said the present government has accorded priority to addressing the issue of discriminatory laws against women. He said concerted efforts are being made to eliminate abuse of women in all its forms‚ with active involvement of women parliamentarians and representatives of civil society organizations. More efforts are underway to provide relief to the victims of domestic violence through legislation. President Zardari said‚ the Benazir Income Support Programme as the poverty alleviation programme has been designed to empower women and millions of women have been receiving assistance under this programme. The President said 26 Shaheed Benazir Bhutto Centers for Women have also been established in various districts to provide immediate relief to female victims of violence. Earlier‚ Secretary Human Rights Shaban Malik‚ Country Director UN Women Alice Shackelford‚ Chairperson Ending Violence against Women and Girls Alliance Valeri Khan‚ highlighted the measures taken by the present democratic government for the empowerment of women. http://www.ptvworldnews.com.pk/national2.asp

ISLAMABAD, Jul 27 (APP): President Asif Ali Zardari Friday said that the Government has decided to appoint women judges in the judiciary as part of its efforts to take social, economic, legal and constitutional steps for the empowerment of the women and for their protection from all kinds of exploitation and violence. He was addressing a signing ceremony here at Aiwan-e-Sadr, to conclude one million signatures campaign, to increase awareness about violence against the women which was attended by a large number of women, members of the federal cabinet, parliamentarians, representatives of NGOs and foreign diplomats. http://app.com.pk/en_/index.php?option=com_content&task=view&id=203373&Itemid=1

This year Ministry of Human Rights in collaboration with UN Women Pakistan launched a four month  advocacy campaign to End Violence against Women by involving all relevant stakeholders for the creation of peaceful environment both at home and in the society. The campaign commenced with a launching ceremony on 28 November 2012 by bringing on board stakeholders and is scheduled to conclude in March 2013, by celebrating International Women’s Day. The campaign will focus on the situation of women’s human rights in devolution context as well as developing a collaborative action plan with other stake holders to address issue of violence against women.

The 16 days of Activism Against gender Violence is an international campaign. Historically the Ministry of Human Rights has been involved in celebrating 16-days of activism to End Violence against Women.

Last year the one million signature campaign was launched and successfully concluded by the Ministry in collaboration with UN Women and civil society organizations.

In response to rising trends of Violence against Women in the country, Parliament has promulgated a number of legislation on women’s issues. After enactment of these laws, effective implementation is essential but often challenged, due to the prevalent patriarchal mindset of law enforcement institutions.  Public awareness on these laws also requires focused and consistent advocacy campaign.

MoHR, in collaboration with UN Women, organized a day long launching ceremony to: