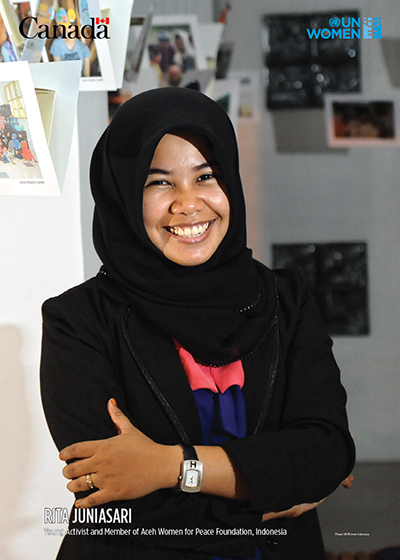 Rita participated in the advocacy trainings held by Flower Aceh through the support of Balai Syura and UN Women. The training inspired her with creative ideas on public awareness and outreach for the advancement of women’s rights, one of which was through film production. While films are powerful storytelling medium. They have the ability to influence and change the world. Rita made her debut as a film director in 2012, and has now made three films. Women’s Inspiration tells the story of women in the rural areas and how, despite their minimal education, they are determined to bring change to their communities. The other two films, Hutan Adat Warisan and Generasi, are about women and climate change. Her next film will portray real life experiences and lives of individuals – particularly women who suffer tragedy, abuse and revival – is something not to be taken for granted.

Rita believes that, “The future of Aceh lies in the young generation. The more creative the youths are, the more progressive Aceh is.”