Kathmandu, Nepal – “My husband raped me almost every day,” describes a woman from Nepal’s Makwanpur district, one of the country’s regions most affected by HIV and AIDS. “He had the misconception that it was his right to have sex with his wife whenever he wanted to.”

Her story is not an isolated one. In Nepal, women are among the most exposed to new HIV infections. Trapped in a cycle of violence and abuse, their inability to negotiate safe sex and refuse unwanted sex contributes to their vulnerability. According to the National Centre for AIDS and STD Control in Nepal, housewives constitute 74 percent of the total reported cases of HIV among women — a large number of them are also spouses of migrant workers or wives of clients to sex workers. 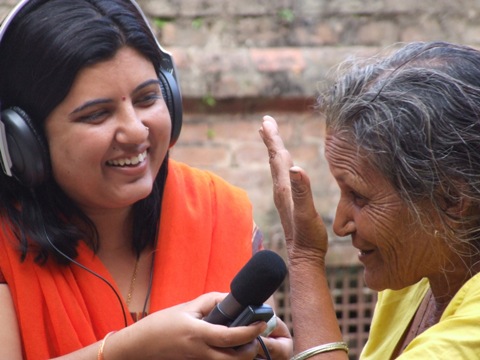 Working to combat the issue, Equal Access— with the support of a three-year grant from the UN Trust Fund to End Violence Against Women— launched the radio programme Samajhdari in Nepal to increase awareness, connect people to appropriate services and encourage community action.

Nepali for “mutual understanding”, Samajhdari reached more than a million listeners every week since it began in 2006, sparking public discussions on the issue of violence against women and HIV prevention. Each show opened with a dilemma that a listener was facing, such as: “My husband forces me to have sex when I don’t want to. How can I say no?” The presenter then brought in a range of voices to comment on the issue, including listeners and local experts.

Equal Access trained women survivors of violence and sex workers to become community reporters, enabling them with the skills and self-confidence needed to produce content for the radio programme. These same women, stigmatized or afraid to step outside their homes at first, later described how they felt honored to hear their voices on air — and their voices reached far and wide. Community listener groups, formed by Equal Access, gathered to tune in for the broadcasts and, following the shows, engaged in related discussions and organized collective actions.

For one woman from Makwanpur, Samajhdari changed her life. “After I started listening to Samajhdari, I encouraged my husband to listen to the programme,” she said. “Once, we both listened to the one of the episodes that dealt with the issue of marital rape. Since then, his behavior has changed and he realizes that what he did in the past was violence against me.”

In order to encourage men to speak up, take responsibility for their actions or act as positive role models in ending violence against women, Equal Access launched the Most Understanding Husband Campaign. Through radio and community outreach, the campaign invited men to share how they put mutual understanding into practice. In response, men across the country sent candid messages about their thoughts and actions. Ten husbands were selected as finalists and their stories were featured on the radio series.

Since the launch of Samajhdari and the Most Understanding Husband

Campaign, Nepal’s women have been breaking their silence — and with the help of men by their side. The number of women, for instance, seeking legal help has more than doubled in the project areas and the number of men supporting interventions to end violence against women has increased five-fold.

“In my society, the belief that men should not help women is prevalent,” said Dayaram Thakur, one of the campaign finalists. “But I help my wife in cleaning the kitchen and washing clothes. I buy vegetables on my own and prepare them for cooking. I also do all the household work.”

Thakur believes that women’s empowerment, after all, is key to the whole family’s prosperity.

Managed by UN Women on behalf of the UN system, the UN Trust Fund supports local and national efforts to end violence against women and girls. The Fund relies on voluntary contributions and your donation is critical. For example, with just USD 21, you could sponsor a day of training for a community reporter. Join us for this vital work. Donate to the UN Trust Fund.