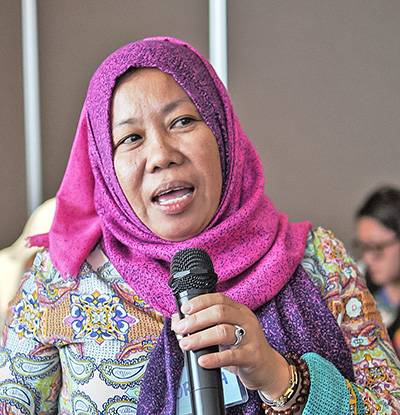 “For the first time, in so many years, I was finally able to share my own experience of armed conflict to other people, to other women; I was relieved”

Noraida Abo, Executive Director of United Youth of the Philippines-Women (UNYPHIL-Women) said during a partners’ workshop held on 28-29 September 2016, in Cagayan de Oro, Misamis Oriental in the Philippines.

Noraida is just one of the individuals, along with their respective organizations, who supported UN Women’s project to harness the capacities of women leaders to pursue gender equality, peace and good governance in the Bangsamoro. Noraida’s story of being an internally displaced person (IDP) and then helping other women IDPs in the Bangsamoro, complemented other women’s stories of resilience. At the same time, the stories became a way of ‘memorialising’ the pains caused by armed conflict, which is still difficult for the people of Bangsamoro[1] to share.

Since 2015, UN Women has worked closely with local women, and peace advocates and organizations to increase women’s leadership and participation in preparation for the transition towards a new Bangsamoro political entity. With support from the Peace Building Fund (PBF), capacity development interventions were pursued with women leaders – Moro, indigenous, young, community leaders, elected and appointed officials, among others – to enable them to achieve greater political participation in the public sphere. While the Bangsamoro law (to create a Bangsamoro political entity) has not yet materialised, the women are pursuing their agenda at the local level, for example: increasing stakeholders’ awareness on the Bangsamoro history, maximising the use of gender budgets, and organising a tribal youth summit towards understanding and respecting diversity. Some women have decided to pursue public office at the Barangay (village) and municipal levels in the next elections (to be held this year at the village level, and at the municipal level in 2019).

UN Women created partnerships at the local level to sustain and provide ownership of project gains and nurture the women leaders who participated in project interventions. Partners are committed to continuing the gains of the project, including by strengthening women’s capacities to lobby and participate in legislative advocacy for a law on the Bangsamoro, creating awareness on the relationship of the Bangsamoro with the central government under the planned federalism track, and continuing the integration of Bangsamoro history in the national school curriculum.

Related News
05/07/2022
In the words of Aileen U. Hualde
27/04/2022
In the words of Sittie Janine M. Gamao: “To overcome my own fears, I think of myself not as babae lang (just a woman) or bata pa (too young) but as a peace officer doing her work.”
08/04/2022
Women groups relieve conflicts in fragile communities in the Philippines
30/03/2022
fwis Kert Tandog
23/03/2022
UN Women supporting female former combatants in the Philippines as agents of peace
END_OF_DOCUMENT_TOKEN_TO_BE_REPLACED